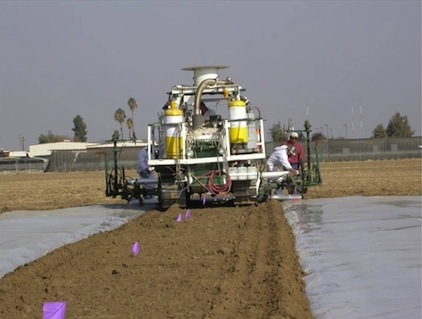 Pesticides usually do their bug killing away from public view. But one such poison, a fumigant called methyl iodide, has been making headlines.

Activists have been staging elaborate protests outside the San Francisco offices of its maker, Arysta Lifescience, Grist reports. And newly released documents reveal, shall we say, irregularities in the process of its recent approval by the state of California, writes Mother Jones‘ own Jen Quraishi.

What gives? Labor Day is a good time to ponder that question, because methyl iodide poses a clear menace to farmworkers, especially those who tend California’s vast strawberry fields.

According to Pesticide Action Network, exposure to the stuff “causes late term miscarriages, contaminates groundwater and is so reliably carcinogenic that it’s used to create cancer cells in laboratories.” Since it is applied to soil before plants even go into the ground, it poses little risk to consumers of strawberries. But for the farmworkers who apply it and the people who live near treated fields, it’s a different story, because of its “tendency to drift off site through the air,” the group warns.

When the state of California convened an independent scientific advisory panel to assess its risks, the finding (PDF) was blunt: Methyl iodide is a “highly toxic chemical” and its use in farm fields “would result in exposures to a large number of the public and thus would have a significant adverse impact on the public health.” Preventing exposure to it would be “difficult, if not impossible,” the panel concluded.

How did such stuff ever make it through the regulatory process and onto farm fields? It turns out to be a twisted story, one involving yet another nasty fumigant called methyl bromide, some vintage George W. Bush-era crony capitalism, and bit of book-cooking within the Governator’s Department of Pesticide Registration.

I told the first two parts of the story in a long 2007 column on Grist. To make a long story short, large-scale monocrops of strawberries and some other fruits, including tomatoes, are susceptible to a microscopic pest called nematodes (which eat the plants’ roots) when they’re planted in the same fields year after year. Rather than diversify their plantings and rotate crops, large-scale farmers have come to rely on fumigants to literally sterilize the soil before planting.

For decades, the fumigant of choice has been another nasty character: methyl bromide. Methyl bromide is also highly toxic to the people who apply it and live near fields treated with it, but it has another effect: It turned out to be one the globe’s most powerful ozone-layer-destroying substances.

Way back in 1987, the United States agreed to phase out methyl bromide by 2005, under the Montreal Protocol—a pact largely credited with saving the ozone layer. Since then, evidence of gruesome harm to farmworkers and their offspring caused by methyl bromide has piled up.

And yet, US farmers still spray millions of pounds of methyl bromide onto fields each year, under exceptions to the Montreal Protocol strenuously negotiated by US presidential administrations, up to and including Obama’s.

The US government’s official opinion on methyl bromide has been: We can’t fully ban it until we find a suitable alternative. And the agrichemical industry has been scrambling to find a Montreal Pact-friendly alternative for years.

Here’s where we get back to methyl iodide. In 2006, the Japanese chemical giant Arysta presented it to the EPA as the perfect candidate to replace methyl bromide. The pitch: It works just as well on nematodes, but it doesn’t harm the ozone layer. As for farmworkers, well…

Arysta had friends in high places while the EPA pondered methyl iodide: In 2006, then-EPA director Stephen Johnson appointed Elin Miller, then-CEO of the North American arm of Arysta, to a high post within the agency. Before her stint at Arysta, Miller had worked at Dow Chemical, “overseeing the company’s public affairs, global pest management, and Asia Pacific operations,” according to an an EPA press release.

More than 50 scientists and doctors, including five Nobel laureates in chemistry, wrote an “urgent” letter (PDF) to the EPA warning the agency about the dangers of methyl iodide, but to no avail: In October 2007, the EPA approved its use. This remains one of the agency’s most controversial decisions ever.

“We are concerned that pregnant women and the fetus, children, the elderly, farmworkers, and other people living near application sites would be at serious risk if methyl iodide is permitted for use in agriculture,” they wrote. The EPA brushed aside their concerns, and the decision remains in effect today. Weeks after the EPA’s decision, Arysta—suddenly poised to take over the lucrative US fruit fumigation market—was sold for a cool $2.2 billion.

Most states in the United States allow any pesticides registered by the EPA to be used on farm fields. But California—the largest potential market for methyl iodide because of its huge strawberry industry—requires as additional approval process through the state’s Department of Pesticide Regulation (DPR).

After a long and drawn-out process, the DPR approved methyl iodide in December 2010, once again defying objections from independent scientists. As Jen Quraishi shows in her Mother Jones post, new documents reveal that the DPR manipulated evidence to justify its decision.

Methyl iodide’s status in California’s farm fields now lies in the hands of Gov. Jerry Brown. Back in March, he vowed to take a “fresh look” at the decision to approve it. As yet, he hasn’t taken action. In his current stint as governor, Brown hasn’t shown much appetite to stand up to the industrial-farm lobby on behalf of farmworkers. In June, he vetoed a bill that would have given farmworkers more power to unionize. Perhaps Labor Day will provide Brown the occasion to remember that he once supported farmworkers and their right to safe working and living conditions.