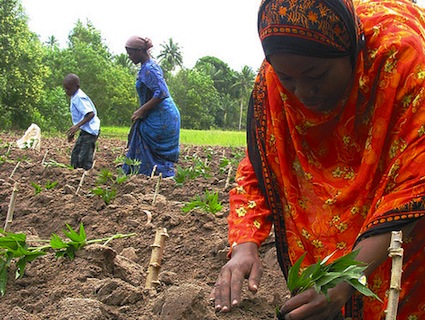 When the the dot-com bubble burst in 2000, investment cash began to trickle into an area that had for decades seemed stodgy and boring: food commodities like corn, soy, and rice. And after the housing market started to unravel in 2006-’07, that trickle turned into a gusher.

According to the UN FAO’s most recent report, global food prices are hovering at all-time highs, and have risen dramatically over the past year. The FAO’s Cereal Price Index is up 36 percent from last year; overall food prices are up 26 percent. The most recent spike is part of a multi-year trend, FAO reports. Inflation-adjusted food prices have tripled since 2004 (see chart below).

To hear Wall Street tell it, the bull market for food reflects the fundamentals of supply and demand. Global population is rising, emerging middle classes in India and China are demanding more grain-intensive meat, and government-backed biofuel schemes in the US and Europe divert ever-larger amounts of food crops in into car fuel. While demand rises quickly, supply—the amount of food grown by farmers—is stagnant: hence, a rapid rise in prices.

That’s the story, anyway, and Wall Street is sticking to it. Jeffrey Saut, chief investment strategist at Raymond James, reiterated it it in a note to investors on Monday. Making the case for investments in agriculture, Staut declared:

With per capita incomes rising rapidly in emerging countries, the burgeoning food demand has left global grain consumption exceeding production; and over the next few decades the situation is likely to get worse because food production needs to expand by some 50% just to meet the estimated demand.

It turns out, though, that Wall Street’s food pitch, like its previous ones about tech stocks and residential real estate, is so much hot air puffing up a bubble (along with the profits of a few big banks and hedge funds). While the housing bubble caused plenty of misery—hundreds of thousands of foreclosures, the worst recession since the Great Depression—the current bubble is even more catastrophic: millions of people globally priced out of food markets.

Their case is simple: while demand for food crops is indeed rising, the massive recent price hikes go far beyond supply-and-demand fundamentals. Instead, they reflect speculative bets that push prices into the stratosphere, drawing in yet more speculative money and new price hikes. To anyone who witnessed the US internet and housing booms, the the situation will be startlingly familar.

To make their case, the Der Spiegal writers cite impeccable sources: a measured, devastating June report (PDF) from the United Nations Conference in Trade and Development; and a short, lucid “briefing note” (PDF) released last week by Olivier de Schutter, the UN’s Special Rapporteur on the Right to Food.

The promotion of biofuels and other supply shocks were relatively minor catalysts, but they set off a giant speculative bubble in a strained and desperate global financial environment. These factors were then blown out of all proportion by large institutional investors who, faced with the drying up of other financial markets, entered commodity futures markets on a massive scale.

On just how massive a scale? de Schutter writes:

A study conducted by Lehman Brothers just before its bankruptcy revealed that the volume of index fund speculation increased by 1,900% between 2003 and March 2008. Morgan Stanley estimated that the number of outstanding contracts in maize futures increased from 500,000 in 2003 to almost 2.5 million in 2008. Holdings in commodity index funds ballooned from US$ 13 billion in 2003 to US$ 317 billion by 2008.

Those numbers, of course, represent hundreds of millions of dollars in fees for Wall Street banks. The influx of cash dried up when Wall Street imploded in 2008, and food prices plunged. But when the banks got back on their feet again—propped up the the US government bailout—the flood of speculation opened anew, de Schutter writes; and food prices have now surpassed their 2008 peak.

Here in the United States, where food prices are low compared to incomes, the effects have been muted for most people—but not for everyone. According to the USDA, the percentage of households experiencing “food insecurity” rose of 11 percent in 2005 to 14.5 percent in 2011, a jump that reflects both the bad economy and the rise in food prices.

But in the global south, the results of Wall Streets speculative binge have been devastating. According to de Schutter, the price spike of 2007-’08 drove 130 to 150 million people into “extreme poverty,” and an added 40 million people to the status of chronically hungry. The price spikes over the past year will likely increase the misery.

One way that investors morally justify the price surge they have set off is by arguing that while it might boost hunger in the short term, higher prices draw additional investment into agriculture, which will help “feed the world” going forward. But this, too, is hype. Indeed, commodities aren’t the only ag-related bubble now in the process of puffing up—prices of farmland, to, have exploded as investors search for new ways to cash in on Wall Street’s food pitch. And as investors snatch up farmland in places like Africa and Latin America for export crops,  the amount of land devoted to feeding low-income residents of those places dwindles, and food insecurity rises. US investors like George Soros are buying up farmland in South America, Bloomberg recently reported. And Africa is morphing into the vegetable patch for Europe and the Middle Eastern oil states. The Der Spiegel article cites a telling example:

Since 2007, the Ethiopian government has approved 815 foreign-funded agricultural projects. Saudi firms, multinational agricultural companies and British pension funds act as investors. Some 3.6 million hectares of land are up for grabs, much of it in the Gambela region, the proposed site of a national park. Now virgin forest is being cleared to produce food for other countries. Fifty kilometers (31 miles) outside the capital Addis Ababa, Jittu Horticulture, a subsidiary of a Spanish agricultural group, produces 180,000 kilograms (396,000 pounds) of vegetables a week. The produce is exported to the Middle East, supplying multinational oil companies and five-star hotels in Dubai, Qatar, Bahrain and Saudi Arabia. “We bring foreign currency into the country, enabling the government to buy wheat for the hungry,” Dutch manager Jans Brins told the Berlin daily newspaper Tagesspiegel. “It’s the government’s responsibility to feed people who are unable to buy anything for themselves.”

How, then, to stop investors from turning the global food system into a casino that brings huge winnings to a few and hunger to millions?

The first step, I think, is to acknowledge it’s happening. The US press has been silent on the speculative roots of the food global food crisis, with the honorable exception of journalist Fredrick Kaufman, whose 2010 Harper’s article “The food bubble: How Wall Street starved millions and got away with it” broke the story of how a novel security from Goldman Sachs, combined with Clinton-era deregulation, set the stage for the investment boom.

In an excellent recent piece in Foreign Policy, Kaufman shows just how difficult it will be to stop Wall Street’s food-gobbling juggernaut. Traders have gotten so savvy about skirting regulation, and markets become so globalized, that no financial-reform law in any one country can stop speculative cash from whipping into food markets. “The new food derivative markets have reached supranational proportions, beyond the reach of sovereign law,” Kaufman writes.

The answer may lie outside of financial regulation and in an idea suggested by de Schutter in his briefing note: the re-introduction of national grain reserves. For most of history since the rise of agriculture, societies have seen fit to store part of bumper harvests away, insurance against a future bad harvest. The US and most other nations kept reserves of storage-friendly crops lie corn and wheat right to the end of the 20th century—but largely dismantled them in the 1990s, based on dogma about how such reserves interfere with free markets, as the University of Tennessee ag economist Daryll Ray recently showed.

But grain reserves could be used to effectively chase speculators out of food markets. When prices rise to levels out of whack with fundamental supply and demand, governments could simply release stored grain, driving down prices and making food affordable again to poor people. In the absence of such mechanisms, writes Ray, “The buffer stock that once was a storable grain has now become a buffer stock of people who are moved out of the demand market whenever the price is beyond their reach. The buffer stock now has a human face.”