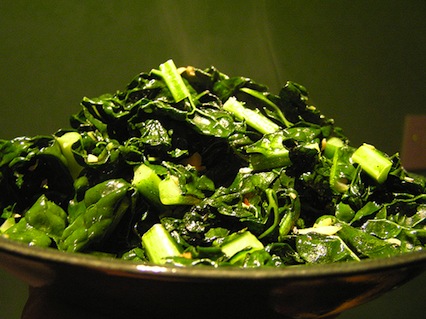 While Big Food rams its Tater Tots and frozen pizza school lunch agenda through Congress, we’re learning more about the effects of diets high in starchy foods and low in green vegetables. And it’s not pretty.

I pointed yesterday to a vast recent Harvard study finding that heavy consumption of potatoes—even in nonfried forms—leads to unhealthy weight gain.

Now, from UK scientists, comes a study (press release here; abstract here) suggesting that green vegetables may have even more dietary importance than we previously thought. (Hat tip Atlantic Life.) The researchers subjected mice to a diet stripped of vegetables and found that after just three weeks, the mice lost 70 to 80 percent of a kind of white blood cell called intraepithelial lymphocytes, which, the press release states, “play a critical role in monitoring the large number of micro-organisms present in the intestine, keeping infections at bay and maintaining a healthy gut.”

Also read: How the beef and dairy industries make sure school lunches stay loaded with fat.

The researchers posit that a substance known as indole-3-carbinol, prominent in leafy greens, is responsible for maintaining these white blood cells. Take it out of the diet, apparently, and the cells die. Here’s a graphical depiction of their findings:

One of the researchers, Marc Veldhoen, remarked that, “since the new diet contained all other known essential ingredients such as minerals and vitamins,” the results surprised him. 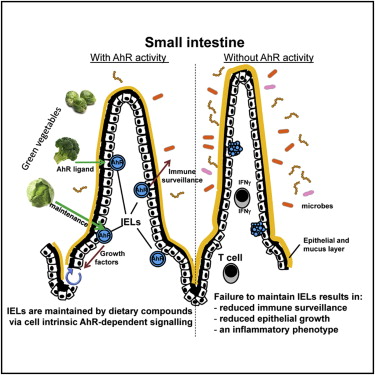 Image: Babraham InstituteBut I’m not surprised at all. Foodstuffs are complex; they are not the sum of their vitamins and minerals, calories and fiber, fat and protein, or any other isolated substance currently being fetishized or demonized by the food industry. As this study shows, you can’t calculate the level of vitamins and minerals found in leafy greens, synthesize them, combine them in a vitamin pill, and then happily dispense with leafy greens. Whole foods interact with our bodies in ways we are only beginning to understand.

I predict someone will be inspired by this study to isolate indole-3-carbinol, synthesize it for a mass-produced pill, and market it as an immune-enhancing wonder supplement. If it happens, I’m willing to bet that that researchers will find that indole-3-carbinol supplements don’t do the work of leafy greens, either. Recall that when scientists discovered the benefits of antioxidants found in fruits and vegetables, the supplement industry rushed out with all manner of antioxidant potions—which proved to be worthless. It turns out that isolated beta-carotene added to a pill or a can of soda doesn’t offer the same benefits as beta-carotene in the context of a carrot. Unfortunately, a recent Centers for Disease Control and Prevention study found that more than two-thirds of US adults fail to meet the recommended daily intake of at least five fruits and vegetables per day.

“Eat real veggies” is something we could be teaching kids in school cafeterias. Instead, we’re going to keep teaching them to scarf down stuff like “potato smiles.”