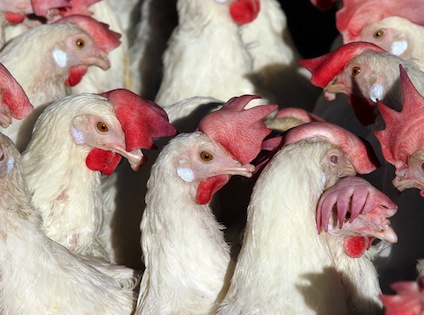 Back in 2006, the European Union banned the practice of dosing livestock with antibiotics as a growth enhancer. In late October, the EU Parliament voted to extend that ban to all prophylactic uses of antibiotics on farms. The move won’t become law unless the European Commission approves it, but the Parliament is considered to be an influential body. The commission will announce a plan to address antibiotic issues on November 17.

Here in the United States, regulation of farm antibiotic use is moving in a different direction. On Monday, the Food and Drug Administration officially denied two citizen petitions—one issued in 1999 and the other in 2005—to impose similar restrictions here. In a letter announcing the decision, an FDA official explained that implementing such a ban would be too cumbersome, and that a voluntary approach would have to do.

In these two news items—one a push to crack down on the abuses of factory meat farms, the other a defense of a voluntary approach—we have a summary of EU and US approaches to food safety.

Mind you, on both sides of the Atlantic, there’s agreement in regulatory circles that routine antibiotic use in animal factories is contributing to deadly antibiotic-resistant bacteria now infecting people. Indeed, in the first two years of the Obama administration, the FDA seemed ready to follow the EU in banning antibiotic use for growth promotion. At a Congressional hearing back in 2009, Joshua Sharfstein, then deputy commissioner of the FDA and a former aid to pro-environment House firebrand Rep. Harry Waxman (D-Calif.), testified to Congress explicitly in support of a bill that would have, like current EU law, banned antibiotics as growth enhancers. Sharfstein testified:

To avoid unnecessary development of resistance under conditions of constant exposure (growth promotion/feed efficiency) to antibiotics, the use of antimicrobials should be limited to those situations where human and animal health are protected. Purposes other than for the advancement of animal or human health should not be considered judicious use.

“Steps need to be taken,” “limitations”: This is the language of a regulatory agency standing up to industry and telling it to stop doing something that endangers the public health.

Six months after that draft was issued, the FDA came out with data on just how much antibiotics factory farms are using. The results stunned even veteran observers of the meat industry’s voracious drug appetite: 80 percent of antibiotics consumed in the United States (excluding those use for industrial purposes like ethanol) go to factory farms.

You might think the revelation would bolster the FDA’s zeal for cracking down on antibiotic use. But then things began to change. Sharfstein, the deputy commissioner who had given blunt testimony to Congress on the topic and was known to have been pushing a hard line, resigned in January 2011.

Now, the denials of the public petitions to crack down on antibiotic use signals that the agency is moving toward a voluntary interpretation of its “guidelines” for “judicious use of antibiotics.” The agency’s November 7 letter announcing its decision to deny the Center for Science in the Public Interest’s 1999 petition puts it like this: “FDA believes that the animal pharmaceutical industry is generally responsive to the prospect of working cooperatively with the Agency to implement the principles recommended” in its draft document. Therefore, no need to impose binding restrictions on antibiotic use, as the petition had called for.

The Center for Science in the Public Interest isn’t buying that logic. Noting that the agency’s denial of the 1999 petition had taken “12 long years,” CSPI executive director Michael Jacobson said in a November 9 statement that “the industry has long failed to cooperate voluntarily, and the FDA should take binding action. Consumers cannot afford another decade of delay.”

I contacted Sharfstein, the former FDA official who pushed a harder line, for comment. He replied in an email that he’s “not able to talk about FDA policy in this area at this point in time.” He added: “I’ll let my comments at the agency (testimony, etc) speak for themselves.”