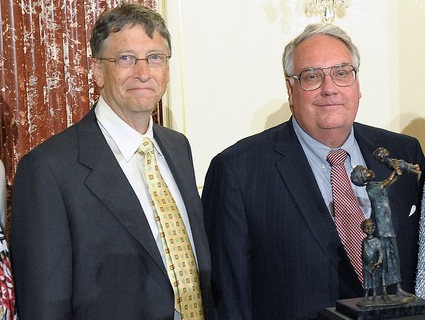 Bill Gates and Howard Buffett, being honored by the World Food Program in Washington in October <a href="http://flickr.com/link-to-source-image">US State Department</a>/Flickr

Howard Buffett—son of billionaire investor Warren—is a fascinating character. He is the hands-on owner and operator of a large-scale industrial corn farm in the Midwest and has been nominated by his father to take over chairmanship of insurance giant Berkshire Hathaway upon the aging magnate’s eventual retirement. He has also emerged as a leading philanthropist on the topic of agriculture in the Global South.

As a gift-giver, Buffett the younger has come into conflict with Bill Gates, whose well-heeled Gates Foundation makes him the leading philanthropist on the topic of agriculture in the Global South. Gates, too, has a strong tie to Warren Buffet. He is said to be like a son to the the famed investor; and when Warren Buffett decided to give away the great bulk of his fortune, he handed a cool $31 billion to Gates’ foundation.

But in a riveting segment of last week’s 60 Minutes, Howard Buffett delivered a blunt critique of Gates’ high-tech approach to improving food security in the Global South. He said that the Gates Foundation was essentially trying to recreate US-style industrial agriculture in Africa, an approach that he himself had tried early in his philanthropic career. “I don’t think it worked,” he said. “We need to quit thinking about trying to do it like we do it in America,” Buffett added.

Earlier in the segment, he championed low-tech, inexpensive methods for increasing farm productivity—a stark contrast to the high-tech seeds and pricey synthetic fertilizers favored by Gates. Buffett emphasizes that Gates’ efforts in African ag aren’t “all wrong” and adds that Gates is the “smartest guy in the world, next to my dad.” But his disagreement with the Microsoft founder over agriculture is clear.

The emerging Gates/Howard Buffett rift on agricultural development has a special resonance for me. I’m a long-time critic of the Gates approach; and back in August, I wrote a post about Howard Buffett, with a headline that screamed, “Warren Buffett’s Son Is Super-Wrong About Africa.”

My argument was actually more subtle than that (I didn’t write the headline). I acknowledged that Buffett fils was sincere and knowledgeable about improving the lot of African farmers, but I questioned his contention—laid out on Huffington Post—that Africa would achieve food security when its farmers scaled up enough to “sell to companies that operate in their country, like ADM, Bunge, Cargill, Maseca [the Mexican corn flour giant part-owned by ADM], or Tiger brands.”

Not so fast, I argued. Such a path would likely lead to the pauperization of most African farmers. I stand by my argument. But I no longer think Buffett’s remark about ADM and Cargill really represents his work.

One reason I’ve changed my mind is that Howard Buffett himself emailed me to tell me he thought I had mischaracterized his views. Another reason is that three stalwarts of the US organic ag movement—Chuck Benbrook, chief scientist of the Organic Center, Sam Fromartz, author of Organic Inc., and Tim Lasalle, former executive director of the Rodale Institute—all wrote comments under my post defending Buffett.

“He clearly understands that fertilizers and GMO’s are not affordable, available, or appropriate for these farmers. His experience in Africa and his writing and speaking about development is one of building soils, cover crops, no till, composts, manure (all biological and regenerative),” Lasalle wrote.

In the wake of my post, Howard Buffett and I agreed to have a public back-and-forth on the topic, but we have not been able to find a mutually agreeable time. I’ll try again to link up with him in the new year. I doubt we’ll agree on everything; it’s hard to imagine perfect harmony developing in a conversation between me and a member of Coca-Cola’s board of directors. But I’m sure it will be an interesting chat.