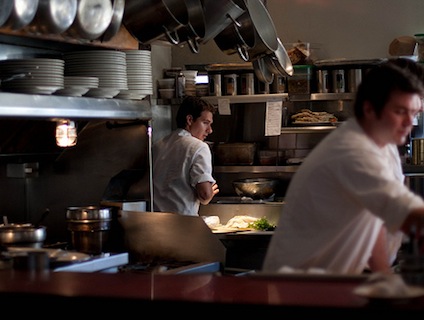 When I was in high school in Texas in the early 1980s continuing into my college years, I worked first as a busboy/dishwasher, then grill cook, at a classic steakhouse. You know the kind: low lighting, lots of red everywhere. Indeed, busboys wore red jackets, white shirts, and black bowties; cooks had to adorn their white uniforms with an annoying red scarf.

The place was part of a small Texas chain that had begun in the ’30s. When I started in 1980, employees with more than six months of seniority were automatically enrolled in a profit-sharing plan. After a year, you got a decent health-insurance policy. The company even ran a credit union that paid decent interest on savings and financed cars and homes for employees. People who worked hard and excelled got steady raises. For long-time cooks, work there charted a path to the middle class.

But at a certain point, the founding owner died and his stepchildren took over. Simultaneously, the Reagan ’80s came into full flower. Slowly, all of those perks disappeared. Wages froze for current employees, and dropped for new ones. Older, high-paid cooks were given the option to accept wage cuts or be fired. Long-time employees began to struggle to maintain their lifestyles.

I was a college-bound kid earning cash on the side, so the changes didn’t affect me much personally. But it was an embittering experience to see people who had become like family to me be treated like dirt. In the end, the draconian changes didn’t do much for the company’s bottom line—it has long since collapsed, and exists now only in rump form.

Meanwhile, over the past couple of decades, we’ve seen chefs emerge as rock star-like figures—they’re the subject of TV spectacles, six-figure book deals, even temples in Vegas.

But the glare of the Klieg lights obscures an important fact: working conditions in most restaurants remain dismal. When I think of food-system exploitation, I think of the vast invisible armies of underpaid workers in farm fields and factory-scale slaughterhouses, out of sight and out of mind for most of us.

For some reason, it’s even easier to forget the people who are right in my face when I go out to eat: the folks who wait tables, clear them, lead people to them, etc. Then there’s the restaurant workers we don’t see: cooks, dishwashers, etc. But get this:

That from a new report from the Restaurant Opportunities Center (ROC). To put those numbers in perspective, restaurant workers’ median hourly wages lag those of even slaughterhouse workers ($11.55)—a group whose plight has been the subject of a scathing Human Rights Watch report.

But ROC isn’t just dishing up the restaurant industry’s dark secrets. It’s also working with restaurant owners across the country to come up with fair labor standards—and it has conducted a major national survey of the nation’s top-grossing restaurants and chains to shine a light on how they treat their workers. The result: a Dining Guide to help consumers direct their money to establishments that treat their workers right.

Mother Jones’ own Jaeah Lee has a great post summarizing ROC’s finding and mashing up its  ROC guide with those of Yelp and Zagat—check it out.

Meanwhile, here are some interesting highlights.

• Burrito chain Chipotle Grill trumpets its “food with integrity”—which “means serving the very best sustainably raised food possible with an eye to great taste, great nutrition and great value.” The firm specifically boasts of its treatment of workers. Yet according to ROC’s report, Chipotle doesn’t participate in ROC’s industry-wide efforts to improve working conditions, doesn’t pay at least $9/hour to non-tipped workers, and doesn’t have a strong record on opportunities for advancement. It does, to its great credit, offer workers paid sick leave.

• It’s heartening to see iconic New York City restaurant groups like Danny Mayer’s Union Square Hospitality and celebrity chef Tom Colicchio’s Craft Restaurants earn great marks from ROC. The two companies run some of the most highly regarded restaurants on the planet, and it’s great to see them show their peers that treating workers well contributes to, and doesn’t detract from, excellence and success.

• Small players can do well while doing right, too. I’ve had several great meals at Slows Barbecue, a fun bar/restaurant in Detroit that tries hard use sustainable ingredients while keeping prices affordable in an economically depressed city. Slows didn’t ace all of ROC’s criteria, but it got high marks in two of five categories—better than the vast majority of the restaurants in the survey.

• What do McDonald’s, Starbucks, Burger King, Carl’s Jr, Wendy’s and Whataburger all have in common? In addition to being highly profitableand ubiquitous chains that serve pretty bad food, all flunked ROC’s tests.

As a former cook who has seen the damage that shoddy treatment does to restaurant workers and their families, I’m delighted that ROC is shining a bright light into the industry’s dark corners.