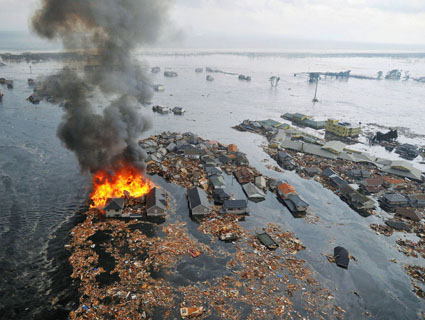 The March 2011 Tohoku earthquake in Japan was the fourth biggest earthquake ever measured, and hands down the biggest earthquake in Japan’s recorded history. The stats are terrifying: 9.0 magnitude, 16,000 deaths, 1.5 million households left without water, and of course, ongoing reactor meltdowns at the Fukushima I Nuclear Power Plant. Less obvious to Western observers were the agricultural repercussions of the ensuing tsunami, whose massive waves crashed up to six miles inland and left more than 58,000 acres of Japanese rice paddies (roughly four times the size of Manhattan) completely saturated with saltwater.

The high salt concentrations made the soil completely untillable for rice and, with the destroyed areas contributing around 18% of the country’s rice supply, sent scientists and government officials scrambling for creative solutions. The Japanese Ministry of Agriculture suggested coating the soil in salt-absorbing limestone and then draining it, a process that would hopefully cleanse the tsunami-hit rice fields by around 2014. Others suggested spraying artificial sweetener alternative Stevia, which Japan currently consumes more of than any other country, to increase potassium levels in the soil, or planting relatively salt-tolerant cotton plants so that impoverished farmers could gain some source of income for their now-fallow land. Yet it quickly became clear that there would be no easy fix for the paddy problem.

Nearly a year later, a team of researchers from Japan and England have a new solution to throw into the mix: making a rice plant specially formulated to thrive in the salt-soaked Japanese paddy fields. The paper, released Sunday in Nature Biotechnology, reveals a new technique called MutMap which lets scientists quickly identify genes where potentially useful mutations can occur, such as increased salt-tolerance, and selectively breed rice plants expressing the desired trait on a much faster timescale than traditional breeding—from as long as ten years down to less than 12 months.

“Until now, plant breeding has not been able to take advantage of the genomics revolution,” says Professor Ryohei Terauchi from Japan’s Iwate Biotechnology Research Centre, and lead author on the paper. In traditional breeding, farmers work through trial and error to find a plant with a desired trait, like salt-tolerance. After that plant has been selected, they must introduce the special plant’s tweaked version of the salt-tolerance gene back in to the genome of the rice plant already optimized to grow in that area (for example, Japanese rice plants grow at slightly colder temperatures than normal.) Since previously scientists couldn’t simply pinpoint the location of desired genes, the process of reintroducing genes was laborious and time-consuming, requiring many generations of plant sex and trait selection. Now that widescale genome sequencing has essentially given us behind-the-scenes access to some of nature’s blueprints, scientists can cheaply and rapidly analyze the DNA in a plant with a specific trait, and clearly link genetic sources to the desired outcomes. “There is no real invention in MutMap,” says Terauchi. “It simply enhances existing procedures. However, the effect of this enhancement is enormous.”

For those concerned about the rise of GM foods in produce aisles, the researchers say that MutMap is no cause for worry. “This is a form of genetic modification, but not the traditional GM approaches as we tend to think about it,” says  Professor Sophien Kamoun, co-author of the MutMap paper. In traditional GM approaches, according to the World Health Organization (WHO), genetic material is altered “in a way that does not occur naturally”—for example, artificially introducing genes from insecticidal bacteria into plant genomes (see Tom Philpott’s piece on one way Monsanto’s Bt plants are backfiring.) In contrast, says Kamoun, MutMap uses processes “no different from what happens in nature all the time” to isolate potentially useful mutations that can occur within the plant’s own genetic machinery.

“A lot of these techniques have been used for decades, as far back as the 50s or 60s,” says Doug Gurian-Sherman, a senior scientist specializing in food and the environment for the Union of Concerned Scientists. “It doesn’t mean that there is absolutely no risk–there’s even a risk in conventional breeding–but it’s certainly very different from the risks associated with genetic engineering.”

Health concerns aside, other experts take issue with the emphasis on high-tech breeding to increase crop yields. “There’s this general overemphasis on breeding specialized crops to increase food production,” says Bill Freese, a science policy analyst at the Center for Food Safety. “It neglects other techniques, like agroecology, that change the way you farm to increase production. These techniques can increase the quality of the soil without any genetic breeding, and without worry of possible health consequences.”

Regardless, says Freese, the MutMap-generated rice may be a very viable solution to Japan’s salt-soaked paddies. And though the new plant is not ready to hit the fields quite yet, once it is it might have much farther-reaching impacts than just Japan. “There has been a lot of work done trying to develop salt-tolerant plants in many areas of the world where there are problems with intensely cultivated soils,”  he says. “If this pans out, it could be really useful.”

And as far as using MutMap to create fast-forwarded varieties of other plants, it remains to be seen whether it can have equal success in crops with larger or more complicated genomes, such as corn, soy, barley, or wheat. Those blueprints might, at least for the time being, end up being too elaborate for us to easily make sense of.