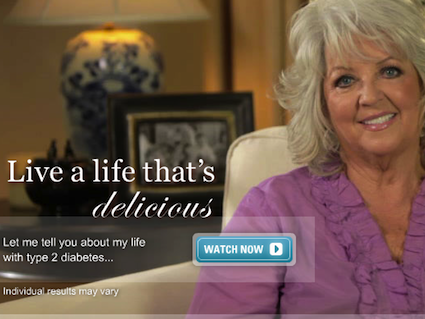 I generally don’t believe in skewering people, even celebrities, for their health problems and/or how they deal with them. So at first I hesitated to join the chorus lambasting Paula Deen for waiting three years to disclose that she has been diagnosed with Type 2 diabetes. But Deen’s stubborn insistance on using her Food TV forum to promote unhealthy food, and her long-time role as a paid shill for industrial-meat giant Smithfield, tempted me to comment on her announcement. (Evidence is mounting, by the way, that industrially raised meat contributes to diabetes risk.).

What pushed me over the edge was her debut this week as a spokesperson for pharma giant Novo Nordisk’s diabetes treatment Victoza. As Anthony Bourdain tweeted in response to the announcement, “Thinking of getting into the leg-breaking business, so I can profitably sell crutches later.” Here, Deen isn’t making a private decision on how to treat an ailment; she’s turning her ailment into a quite-public revenue stream. And she’s broadcasting a clear message to her legion of fans: Eat all the junkie food you want, and don’t worry, because the pharmaceutical industry will bail you out.

In fact, Deen’s favored Big Pharma diabetes product might be as questionable as the meat she promotes. The FDA approved Victoza in January 2010, but it did so amid strong evidence of a link to thyroid cancer. In April 2009, the FDA’s Endocrinologic and Metabolic Drugs Advisory Committee voted 12-1 that rodent data linking the drug to thyroid cancer could apply to humans. The committee got hung at 6-6 (with one abstention) on whether the cancer risk was ground for FDA rejection. The drug eventually won approval anyway.

And then last June, reported MedPage Today, the FDA “issued a warning about the risks of thyroid cancer and pancreatitis associated with the diabetes drug liraglutide (Victoza).”  The agency “directed drugmaker Novo Nordisk to send out a ‘Dear healthcare professional’ letter after determining that some primary care providers were not fully aware of the serious risks,” MedPage reports. Because of the cancer concerns, FDA ordered that Novo Nordisk include a so-called “black box” warning (PDF) on the drug’s label. Black boxes are the agency’s strongest warning, used only when grave side effects are at issue. The drug “causes thyroid C-cell tumors at clinically relevant exposures in rodents,” the warning states.

Nowadays, Novo Nordisk places an impressive list side effects along with the black box warning on its web page for Victoza, right under the slogan “Diabetes in a new light” and photo of a grinning Deen urging us to “live a life that’s delicious” (see photo above). In addition to cancer, here are the other possible side effects:

What do Victoza users gain for taking on risk of cancer and other troubles? Here’s the kicker: Some medical authorities question whether drugs designed to bring down blood sugar for Type 2 diabetes patients provide any benefits at all. University of North Carolina professor of medicine Nortin Hadler is a particularly fierce critic. He penned a blunt 2008 paper in the Clinical Journal of the American Society of Nephrology declaring them essentially useless, because, he claims, lowering patient’s blood-sugar levels does not deliver any tangible benefits. And in his 2011 book Rethinking Aging: Growing Old and Living Well in an Overtreated Society, Hadler minced no words. The drugs should be “taken off the market until one can be shown to benefit some group of patients, any group of patients.” He continued: “That’s obvious—why hasn’t it happened? One answer is that there is such a cloud of smoke and so many mirrors that few see clearly to join me in this outcry. Another answer is greed. In a phone interview, Hadler told me that all the drugs designed to do what Victoza does have “significant side effects” and “have never been shown in years of study to provide any benefit.”

Speaking of smoke and mirrors, back in 2010, Novo Nordisk was rebuked by the UK Prescription Medicines Code of Practice Authority for “promoting Victoza prior to the receipt of its marketing authorization on a number of occasions, making claims and comparisons that were misleading, disguising promotional material and failing to provide information which reflected available evidence” in the United Kingdom.

Again, Deen deserves no scorn for being diagnosed with diabetes. But using her illness to profit from a dubious drug like this makes her a fair target for criticism.