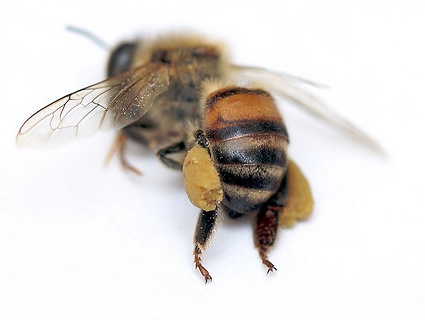 For the German chemical giant Bayer, neonicotinoid pesticides—synthetic derivatives of nicotine that attack insects’ nervous systems—are big business. In 2010, the company reeled in 789 million euros (more than $1 billion) in revenue from its flagship neonic products imidacloprid and clothianidin. The company’s latest quarterly report shows that its “seed treatment” segment—the one that includes neonics—is booming. In the quarter that ended on September 30, sales for the company’s seed treatments jumped 28 percent compared to the same period the previous year.

Such results no doubt bring cheer to Bayer’s shareholders. But for honeybees—whose population has come under severe pressure from a mysterious condition called colony collapse disorder—the news is decidedly less welcome. A year ago on Grist, I told the story of how this class of pesticides had gained approval from the EPA in a twisted process based on deeply flawed (by the EPA’s own account) Bayer-funded science. A little later, I reported that research by the USDA’s top bee scientist, Jeff Pettis, suggests that even tiny exposure to neonics can seriously harm honeybees.

Now a study from Purdue University researchers casts further suspicion on Bayer’s money-minting concoctions. To understand the new paper—published in the peer-reviewed journal Plos One—it’s important to know how seed treatments work, which is like this: The pesticides are applied directly to seeds before planting, and then get absorbed by the plant’s vascular system. They are “expressed” in the pollen and nectar, where they attack the nervous systems of insects. Bayer targeted its treatments at the most prolific US crop—corn—and since 2003, corn farmers have been blanketing millions of acres of farmland with neonic-treated seeds.

No one disputes that neonics are highly toxic to bees. But Bayer insists—and so far, the EPA concurs—that little if any neonic-laced pollen actually makes it into beehives, and that exposure to tiny amounts has no discernible effect on hive health. Bayer also claims that bees don’t forage much on corn pollen.

The Purdue study calls all of this into question. The researchers looked at beehives near corn fields and found that bees are “exposed to these compounds [neonics] and several other agricultural pesticides in several ways throughout the foraging period.” Contradicting Bayer’s claim that bees don’t forage much in cornfields, they found that “maize pollen was frequently collected by foraging honey bees while it was available: maize pollen comprised over 50% of the pollen collected by bees, by volume, in 10 of 20 samples.” They detected “extremely high” levels of Bayer’s clothianidin in the fumes that rise up when farmers plant corn seed in the spring. They found it in the soil of fields planted with treated seed—and also in adjacent fields that hadn’t been recently planted. And they found it in dandelion weeds growing near cornfields—suggesting that the weeds might be taking it up from the soil.

Most alarmingly of all, they found it in dead bees “collected near hive entrances during the spring sampling period,” as well as in “pollen collected by bees and stored in the hive.”

Now, neonic pesticides likely have two separate effects on bees: an acute one during spring corn planting, when huge clouds of neonic-infested dust rises up, at doses that kill bees that come into contact with it. Those population losses weaken hives but don’t typically destroy them. And then there’s a gradual effect—what scientists call “chronic”—when bees bring in pollen contaminated at low levels by neonicotinoids. Research by the USDA’s Pettis suggests that even microscopic levels of exposure to neonics compromises bees’ immune systems, leaving hives vulnerable to other pathogens and prone to collapse.

The EPA has thus far relied on Bayer-funded research to maintain its registration of clothianidin —even after a leaked document in late 2010 showed  that its own staff scientists found Bayer’s research to be shoddy. The agency ignored the ensuing controversy and once again let farmers plant seed treated with Bayer’s concoction. The Purdue researchers report that “virtually all” of the vast US corn crop is now planted with seed treated with Bayer’s dodgy pesticide, and the technology is rapidly spreading to the other most prodigious US crops: soybeans, cotton, and wheat. Now, ahead of the 2012 growing season, we have peer-reviewed, USDA-funded research that bluntly challenges Bayer’s claims and implicates it in colony collapse disorder. Will the EPA look the other way while tens of millions of acres are poisoned for the nation’s besieged honey bees?

Frankly, quite probably so. Bees can’t organize political campaigns, of course, and the beekeeper lobby doesn’t wield much influence in the grand scheme of things—though Pesticide Action Network is working hard to amplify their voice. Bayer, meanwhile, is a paid-up member of Croplife America, a powerful agribusiness interest group that the Obama administration won’t likely want to tangle with heading into an election. Bad news for bees—and bad news for the ecosystem of which they’re such a vital part: ours.