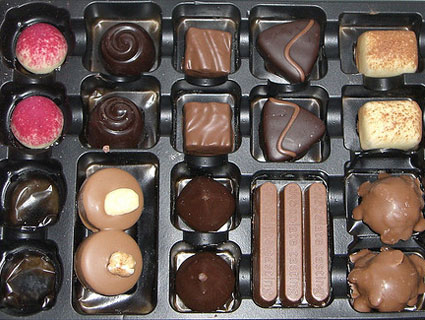 Scientists love to investigate the potential health benefits of chocolate: A search of “chocolate” on PubMed, the primary database of biomedical research, yields references to 800 papers over the last three years. This emerging body of evidence suggests that chocolate might improve a range of metabolic processes and reduce the risk of heart disease, among other positive effects.

Just this week, researchers from San Diego State University are reporting at a scientific conference that, in a randomized trial, eating dark chocolate led to lowered blood glucose levels and better cholesterol profiles. The trial was very small (31 participants), very short (15 days), and as-yet unpublished, so the findings, while encouraging and consistent with previous research, need to be taken with a huge dose of caution.

But so many people want to believe in the healing powers of chocolate that claims often outpace the evidence at hand. Late last month, researchers from the University of California-San Diego, reported that people who ate chocolate most often also measured lowest in body fat. (What’s with all the chocolate research coming out of San Diego, anyway?) Stories promoting the stuff as a boon to weight loss zipped around the web and social media sites—just in time for Easter chocolate-bunny-buying season. This headline from CBSNews.com was pretty typical: “Eating Lots of Chocolate Helps People Stay Thin, Study Finds”—a misleading interpretation of the findings.

Let’s be clear: I’m a chocolate freak (only dark, 65-75 percent), so I’d be quick to gorge if I thought these stories were accurate. But the study about chocolate and weight, published in the prestigious, peer-reviewed medical journal Archives of Internal Medicine, proved no such thing, as at least one health blogger, a Canadian obesity doc, immediately pointed out. The researchers asked around 1000 men and women how many times a week they ate chocolate; their height and weight were also measured to determine Body Mass Index, or BMI, a standard measure of body fat. The most frequent chocolate consumers turned out to have the lowest BMI.

But studying chocolate is complicated because there are so many varieties processed in so many ways, and the cocoa from which it’s made contains multiple substances, such as antioxidants, that are likely to impact physiologic functions. Long-term experimental trials, with people randomly assigned to eat specific amounts or none at all, would produce the most reliable evidence but are challenging to conduct. Given that chocolate is loaded with fat and sugar, how much of it can researchers ethically ask participants to ingest, and for how long? And chocolate-haters required to eat five candy bars a week would drop out of the study quickly; so would chocolate-lovers deprived of it altogether.

Subjects were asked how often they ate chocolate but not about whether it was dark, milk, or white; since these vary tremendously in chemical and nutritional profiles, including fat and sugar content, lumping them together could jumble the results and generate provocative, but inaccurate, conclusions. Moreover, there could be unrecognized differences in diet, exercise, and other lifestyle factors between lovers of Snickers bars and people whose lips touch only premium dark; if so, that would skew the results even more.

Another serious limitation of the study is that there’s no way to determine the order of events. Maybe chocolate doesn’t cause weight loss; instead, maybe people who are already thin allow themselves to eat more chocolate, because they can. And maybe the plus-size folks in this study ate less because they didn’t want to get fatter. Or maybe the heavier ones actually gobbled it down more often than they were willing to admit, to a researcher or even themselves.

So, no, I don’t think that chocolate will make me thinner. But like all chocoholics, I still find it hard not to be unreasonably buoyed by the snippets of data from the two San Diego studies, however inconclusive. I guess I’ll keep taking my modest daily dose of dark, savor it, and hope it pays off.