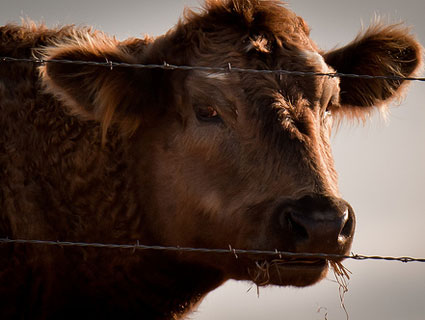 Move along, nothing to see here.

That sums up the USDA’s public reaction to news that a downed California dairy cow was discovered to have contracted bovine spongiform encephalopathy, also known as mad cow disease. The cow had an “atypical” case of BSE, one that likely doesn’t come from BSE-infected feed, but rather from a genetic mutation, the agency insists.

Moreover, it never came close to entering the food supply, USDA stressed—it had shown up dead at a rendering facility, where it was randomly chosen for testing as part of the USDA’s BSE-testing program. USDA chief Tom Vilsack, ever ready to jump to the meat industry’s aid at a time of need, declared on CNN, “I’m having beef tonight for dinner. And that’s no lie.”

Global food and health agencies echoed the USDA’s assessment, Bloomberg reports: “The U.S. finding of a case of mad cow disease shows the country’s surveillance system is working, according to the United Nations’ Food & Agriculture Organization and the World Organisation for Animal Health.”

Let me raise two uncomfortable points about this case.

• The idea that the discovery of this BSE-stricken cow proves that the US “surveillance system is working” is, well, ludicrous. The cow showed up at Baker Commodities, a California company plant that buys spent cows from California’s vast dairy industry and renders them into various pet and livestock feed products.

Here’s how a Baker executive described the discovery to Business Week:

“We randomly pick a number of samples throughout the year, and this just happened to be one that we randomly sampled,” Baker Commodities executive vice president Dennis Luckey said. “It showed no signs” of disease.

So when the rendering plant picked up the infected cow, it was just another dead cow to be rendered. However, in an update released Thursday afternoon, the USDA revealed that the animal was “humanely euthanized” on the dairy farm where it lived, “after it developed lameness and became recumbent.” Apparently, the dairy farm did not communicate with the rendering plant that the cow had gone lame, and thus was a good candidate for BSE infection.

Altogether, the USDA program tests about 40,000 cows a year for mad cow—a tiny fraction of the millions that are slaughtered or otherwise die each year. (Bloomberg puts the portion tested annually at “less than 0.1 percent of the U.S. cattle herd.”) By contrast, in the European Union, all sick or downed cattle over the age of 4 years old, all healthy cows over six years, are tested before being slaughtered or rendered. The California cow, the USDA said in its Thursday statement, was 10 years and seven months old—so it would have been automatically tested in Europe.

The USDA currently tests less than 0.1 percent of the US cattle herd for Mad Cow Disease.

So rather than representing a triumph of the system, the California discovery represents a lucky break. Other BSE-infected cows could be getting rendered into livestock and pet feed, and no one would know.

As Michael Hansen, senior staff scientist at Consumers Union, put it in a statement, “We really don’t know if this is an isolated unusual event or whether there are more cases in US beef. Our monitoring program is just too small.”

• The California cow’s BSE might have come from feed—and cows are still being fed cow protein. Now, as noted above, the USDA reports that the California case had “atypical” BSE, which, it says, is thought to derive spontaneously, not from feed. “USDA confirmed the animal was positive for atypical BSE, a very rare form of the disease not generally associated with an animal consuming infected feed,” the USDA wrote in a Wednesday statement. In a Friday morning email, a USDA press officer confirmed to me that the atypical BSE in question is of the L-type, which, as I showed in my last post, has been shown under lab conditions to be far more virulent than what scientists call “classical” BSE, the kind that wrought havoc in the UK in the 1990s.

The feed question is vital. If the cow indeed developed BSE through some genetic mutation and not through feed, then this particular mad cow instance can be viewed as a random and extremely rare event. But if feed was the pathway, then we have to ask hard—and for the dairy and beef industries, extremely uncomfortable—questions about just what we’re feeding our nation’s vast herd of cows. And if that cow contracted BSE from what it ate, wouldn’t other cows have been exposed, too?

Paul Brown, a scientist retired from the National Institute of Neurological Diseases and Stroke, questions the USDA’s assertion that atypical BSE isn’t associated with feed. “The most likely explanation is that it arises from the same source as typical BSE,” he said, which is infected feed. He added that it’s a “theoretical possibility” that the California BSE case arose spontaneously, but “there’s no evidence for it.”

Linda Detwiler, a clinical professor in the Department of Pathobiology and Population Medicine at Mississippi State University, told me via phone that the current scientific thinking is that “atypical” BSE types do probably arise spontaneously, but “feed certainly can’t be ruled out.” Ermias Belay, associate director for epidemiological science at the CDC’s  Division of High-Consequence Pathogens and Pathology, echoed that assessment in a phone interview.

Now, back in 1997, in response to the UK mad cow crisis, the FDA banned the longstanding practice of feeding rendered cow protein to cows, and in 2008 banned “the tissues that have the highest risk for carrying the agent thought to cause BSE”—brains and spinal tissue from cows older than 30 months—from animal feed altogether.

But there is still at least one pathway through which cow proteins move into cow feed: the practice of feeding “poultry litter”—poultry feces mixed with bedding, spilled feed, and chicken carcasses—to cows. How does that bring cow protein into cow diets?

Meat and bone meal from cows is explicitly banned from cow diets. But it ends up in chicken feed; a significant amount of it spills into bedding and ends up in poultry litter; and poultry litter gets fed back to cows.

Let’s go back to that rendering plant in California, Baker Commodities, where the current case of BSE was discovered. Rendering plants like Baker buy downed cows and other animals and transform them into a variety of products, including feed for chickens. Here’s how it describes one of its products, “protein meal”:

Meat and bone meal produced from the rendering process is used as a protein and energy supplement in poultry and swine feed and may also be utilized as an ingredient in the manufacture of pet food.

Now, meat and bone meal from cows is explicitly banned from cow diets. But it ends up in chicken feed; a significant amount of it spills into bedding and ends up in poultry litter; and poultry litter gets fed back to cows.

Official numbers on just how much poultry litter ends up in bovine diets is hard to come by. But with corn and soy prices at heightened levels in recent years, feedlot operators are always looking for cheaper alternatives, and poultry litter is very much in the mix. Consumer Union’s Michael Hansen claims that 2 billion pounds of chicken litter are consumed by cows each year—as much as a third of which consists of spilled feed, including bovine meat and bone meal. The University of Missouri’s agricultural-extension service explains chicken litter’s appeal like this:

Beef cattle have the ability to digest low-cost feedstuffs that are not usable by other livestock species. One such feedstuff is poultry litter, which provides opportunities for both the poultry producer and the beef cattle producer. The large quantities of litter produced during modern poultry production are expensive to dispose of safely; moreover, protein is typically the most expensive ingredient in ruminant diets. Feeding poultry litter is a means of disposing of a waste product while concurrently supplying a low-cost protein feed to beef cattle.

It’s important to note that the dairy industry, too, utilizes chicken litter.

Now, it’s also important to note, as I wrote above, that the FDA banned the use of “the tissues that have the highest risk for carrying the agent thought to cause BSE”—brains and spinal tissue from cows older than 30 months—from being rendered into any animal feed, including chicken feed, in 2008.

But other cow parts can also carry the infections. For classical BSE, Detwiler told me that “current research shows that the infection moves from the intestines up to the spinal column through the nerves.” Tonsils, too, can carry the infection. Intestines, nerve tissue, and tonsils, of course, are fair game to be rendered into chicken feed. “In essence, you’re allowing ruminant protein to be fed back to ruminants,” she said.

As for atypical L-type BSE, like the one found in California, “we’re just really starting to get results on that—we just don’t know” what parts are infectious. She said some evidence has arisen suggesting that lymphoid tissue in cows infected with atypical BSE have “abnormal prion protein.”

Detwiler pointed to the European Commission’s feed ban as a better way to keep all bovine protein out of bovine diets. It lays out a simple principle for keeping cow protein out of cow diets: it prohibits the “use of processed animal protein (PAP) in feed for farmed animals.”

“If I had my druthers, poultry litter would not be allowed in cow feed,” she said.

Detwiler raises another important point regarding feed. Even if the case of BSE in California arose spontaneously—and even if atypical BSE in general has so far been arising spontaneously when it has been found in Europe—it also seems to be quite infectious. As the CDC’s Belay told me, “all of these prion-related diseases are transmissible through infected material.”  If that infected cow in California hadn’t been randomly selected for testing, it could have ended up being rendered for poultry feed—and ultimately fed back to cattle.

But even more than the chicken-litter issue, what concerns Detwiler is the issue of compliance. “There hadn’t been a case in six years,” she pointed out. “Hopefully, [rendering plants] are removing brains and spinal columns with care,” she said. “There’s a tendency with anything to let the guard down—my message would be that we really can’t get complacent on this issue.”

While the USDA is downplaying the public health ramifications of the California BSE case, US public health officials should see it as a kick in the pants. It’s time to ramp up the testing of cows—and Europe has proven it can be done economically. And it’s time to ban all cow protein from animal feed—or, at the very least, get chicken litter out of cow diets.