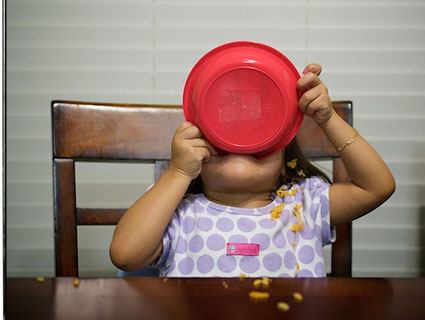 My recent post on the question of food deserts and people’s eating habits led me to a topic I haven’t touched in a while: school lunches. I wrote about it a lot in 2009-’10, when Congress was working on its once-in-five-years reauthorization of lunch funding.

Amid much hype in late 2010, President Obama signed a reauthorization bill that created new guidelines to encourage more fresh and healthy foods, but allocated an extra 6 cents a day per kid—a miserly sum given that schools have less than $3.00 per day to spend on each kid’s lunch, about two-thirds of which goes to overhead, leaving pennies to spend on ingredients.

It’s hard for me to imagine that schools can serve up decent food at those rates. And money isn’t the only scarce commodity cafeteria operators have to grapple with. Another one is time. Get this:

In the Minneapolis public schools, we are supposed to have 15 minutes to eat, which would be bad enough. But realistically we get only 10 to 11 minutes (we have been timing it).

That’s from Minneapolis sixth graders Talia Bradley and Antonia Ritter, writing on the op-ed page of the Minnesota Star Tribune. Ten to 11 minutes to eat lunch? Welcome to fast-food nation, kids, where eating is a necessary inconvenience, to be dispatched with as rapidly as possible.

Nationwide, similar trends hold sway. According to the School Nutrition Association, elementary-school kids get a median of 25 minutes for lunch, while middle and high school students get 30.

Over at the Lunch Tray blog, University of Iowa law professor and parent of public-school children Chris Liebig offers the following explanation for what he calls the “incredible shrinking lunch period”:

At a meeting with concerned parents, the school superintendent sympathized with our concerns, but explained how much pressure the administrators were under, because of No Child Left Behind, to raise standardized test scores. As a result, administrators felt that they had to add instructional time to the day, and there were only so many places to find those minutes. Hence the disappearing lunch and recess.

What seems to be going on in schools is that administrators are drawing a clean line between eating and education—and squeezing the one in order to make more time for the other in an era of budget cuts.

But as Lunch Tray blogger Bettina Elias Siegel argues, that distinction is false. She points to a post by Karen Le Billion (author of French Kids Eat Everything), who puts the case like this:

Learning doesn’t stop in the lunchroom, in my opinion. If we are giving our children a short lunch break, we are teaching them that food is an inconvenience, and eating is an interruption in the day. We encourage them to gobble their food, when the research shows that eating more slowly is healthier. In fact, the French spend longer eating, but eat less–in part because that ‘fullness feeling’ (satiety signal) needs about 20 minutes to get from your stomach to your brain. But the French also spend longer eating because they believe that it’s important to teach kids to eat well—it’s a life skill, like reading.

Hustling kids through lunch, by contrast, seems an ideal way to mint life-long customers for the fast-food industry.