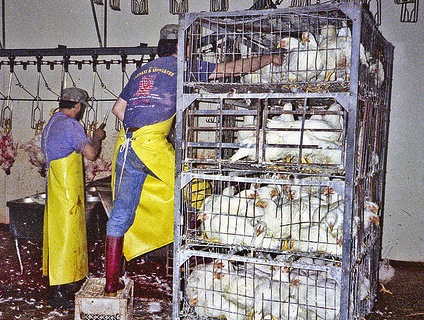 Poultry workers already have to work perilously fast—and now the USDA wants them to speed it up.<a href="http://www.flickr.com/photos/farmsanctuary1/2808684873/sizes/z/in/photostream/">Farm Sanctuary</a>/Flickr

As I reported a while back, the USDA is pushing a new regime for industrial-scale poultry slaughterhouses: The agency wants to fire its own inspectors and let the poultry companies oversee their own kill lines. And that’s not all. The proposed new rules would allow the companies dramatically speed up  those company-inspected kill lines.

In my previous post, I focused on the food-safety implications of the new rules. I pointed to this Food & Water Watch report, which analyzed the USDA’s own data on pilot programs testing the new rules, obtained under the Open Record Act. FWW found that in plants that had participated in the pilot program for the new rules, company-paid inspectors had done a less-than-stellar job at picking out feces-contaminated birds whizzing past at rates of up to 200 birds per minute, or 3 per second. 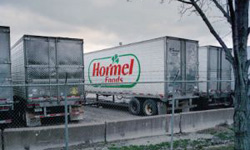 But what’s even more egregious is the human cost to the people working with their hands on those kill lines. As Mother Jones co-editors Monika Bauerlein and Clara Jeffery put it (citing Webster’s) in their piece on the economy-wide trend toward workplace acceleration, speedups are all about “an employer’s demand for accelerated output without increased pay.” But poultry workers stand to get more than just a wage squeeze from this particular government-proposed speedup. Celeste Monforton of the occupational-health blog The Pump Handle points to this “action alert” released by the National Council of La Raza, a civil rights and advocacy group for US Latinos, urging the USDA not to put the new rules in place. As the NCLR appeal shows, line workers are subject to all manner of repetitive-motion injuries at current rates—a situation that would only be worsened by the USDA’s plan.

The journalist Gabriel Thompson, who spent a year working alongside undocumented Latinos for his book Working in the Shadows, recently described his time as a poultry worker in The Nation:

I was soon tearing through more than 7,000 chicken breasts each night (I worked the graveyard shift), while nearby workers sliced up countless birds with knives and scissors. The massive plant was capable of killing and processing nearly 1.5 million birds a week, and the pace was as relentless as such numbers suggest. We often didn’t even have time to wipe bits of chicken flesh from our faces, and I took to popping ibuprofen during breaks to quell the swelling in my hands. (Pilgrim’s Pride, the poultry giant that owned the plant, was nice enough to line one wall of the break room with dispensers filled with painkillers; it wasn’t nice enough, however, to provide them free of charge.)

If anything, government regulators should be intervening to improve such harsh conditions. Why is the USDA proposing to make them even harsher? The agency laid out its rationale in its Federal Register notice announcing the new proposal back in January: “This proposed rule is a result of the Agency’s 2011 regulatory review efforts conducted under Executive Order 13563 on Improving Regulation and Regulatory Review.”

Executive Order 13563, issued by President Obama in January 2011, “orders government-wide review of the rules already on the books to remove outdated regulations that stifle job creation and make our economy less competitive,” as the president himself put it in a Wall Street Journal op-ed at the time.

In other words, the USDA is sticking its poultry workers at the behest of Obama’s zeal to deregulate, an impulse embodied by Cass Sunstein, director of the administration’s Office of Information and Regulatory Affairs (OIRA), recently deemed by Mother Jones‘ Hannah Levintova as “the little office behind Obama’s big enviro flops.” Pointing to a December report from the Center on Progressive Reform, Levintova wrote that “when it comes to dismantling environmental reforms, Obama’s administration is actually on par with that of former President George W. Bush.”

The USDA says that firing its poultry inspectors will save it $90 million over three years—a paltry sum in the grand scheme of the federal budget—while the increased line speed will save the industry $250 million annually in production costs. Subjecting already-vulnerable poultry workers to a ramped-up kill line to pinch a few budgetary pennies and boost the meat industry’s bottom line would likely have inflamed progressives if Bush had attempted it. I hope they hold Obama to the same standard.

The USDA will accept comments on the proposed rule until May 29.