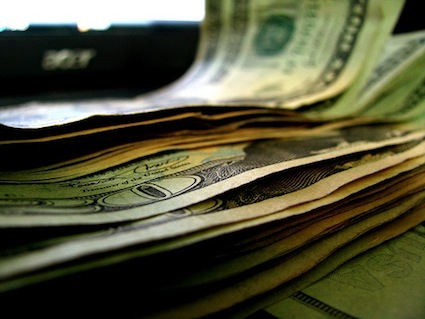 If you want your crops to bear fruit, you have to feed the soil. Few industries understand that old farming truism better than ag-biotech—the few companies that dominate the market for genetically modified seeds and other novel farming technologies. And they realize that the same wisdom applies to getting what you want in Washington, DC.

According to this 2010 analysis from Food & Water Watch, the ag-biotech industry spent $547.5 million between 1999 and 2009. It employed more than 100 lobbying firms in 2010 alone, FWW reports, in addition to their own in-house lobbying teams.

The gusher continues. The most famous ag-biotech firm of all, Monsanto, spent $1.4 million on lobbying in the first three months of 2012, after shelling out $6.3 million total last year, “more than any other agribusiness firm except the tobacco company Altria,” reports the money-in-politics tracker OpenSecrets.org. Industry trade groups like the Biotechnology Industry Organization and Croplife America have weighed in with $1.8 million and $524,000, respectively.

What fruits have been borne by such generous fertilizing of the legislative terrain? It’s impossible to tie the fate of any bit of legislation directly to an industry’s lobbying power, but here are two unambiguous legislative victories won on the Hill this month by Monsanto and its peers.

• As part of a flurry of last-minute activity ahead of last week’s Senate farm bill vote, Sen. Bernie Sanders (I-Vt.) brought up an amendment that would have explicitly allowed individual states to do something the industry has long vigorously opposed: require the labeling of foods containing GM ingredients.

In doing so, Sanders was likely responding to events in his home state—the Vermont Legislature recently considered a wildly popular bill that would have required labeling of GMOs, but it collapsed amid fears among lawmakers that Monsanto would sue the state. A congressional statement on the right of states to label GMOs would go a long way toward allaying those fears.

The Sanders amendment might have been expected to draw bipartisan support. Polls consistently show that more than 90 percent of Americans, Democrats and Republicans alike, favor labeling of GMO foods. In addition, there was something in it for both sides: for Republican senators, an affirmation of states’ rights; for Democrats, a thumb in the eye to a powerful industry that would have energized the lefty base.

Yet Sanders’ amendment proved unpopular on both sides of the aisle, crashing by a vote of 73-26. (A listing of individual senators’ votes can be found here.)

To fight the push to label GMO foods, Big Ag lobbying groups have rolled out the Coalition Against the Costly Food Labeling Proposition.

The battle over labeling now shifts to California, where voters will consider a GM-labeling proposition in November. Tony Corbo of Food & Water Watch told me that the defeat of the Sanders amendment means that a successful California proposition could be nullified in court, based on the argument that states can’t require more rigorous labeling than the FDA does.

Yet the ag-biotech industry is leaving nothing to chance. It rolled out the Coalition Against the Costly Food Labeling Proposition with “major funding by Council for Biotechnology Information and Grocery Manufacturers Association,” as the group’s website puts it. In just the first three months of 2012—before the labeling proposition even made it to ballot—those two organizations had already donated $625,000 to the coalition, according to the California Department of State. That’s the most recent number available—I’ll be checking in for updates as the November election draws nearer.

The provision Kingston added—a single paragraph buried in a 90-page bill, Bloomberg reports—would allow farmers to plant GM crops even during legal appeals of the USDA’s approval process, and even if a federal court orders that the crops not be planted. The provision addresses one of the ag-biotech industry’s most persistent complaints: that the USDA approval process keeps rubber-stamping its novel products, but an anti-GMO group called the Center for Food Safety keeps launching, and winning, lawsuits charging that the USDA didn’t properly assess the environmental impact of the novel crops, thus delaying their release into farm fields. (I described the process in detail in this 2011 post).

Kingston had already established himself as a friend of the industry. In April, the Biotechnology Industry Organization, whose members include ag-biotech giants Monsanto and DuPont, named him its “legislator of the year for 2011-2012.” BIO declared Kingston a “champion of America’s biotechnology industry” who has “helped to protect funding for programs essential to the survival of biotechnology companies across the United States.” BIO has deep intimate institutional knowledge of how Congress works—its president and CEO, James C. Greenwood, has crept through the revolving door between government and industry, taking his current position in 2005 immediately after a 12-year run as a US congressman from Pennsylvania.

Before Kingston’s subcommittee voted on the bill, Greenwood lobbied in favor of it, Bloomberg reports.

A “stream of lawsuits” have slowed approvals and created uncertainties for companies developing the modified plants, James C. Greenwood, president of the Biotechnology Industry Organization…said in a June 13 letter to Congress. “The regulatory certainty provided by this legislative language would address an immediate threat to the regulatory process.”

The bill, complete with its gift to the industry, sailed through the ag appropriations subcommittee and will likely be taken up by the full House soon after the July 4 recess. Food & Water Watch’s Tony Corbo told me the provision has a solid chance it making it into law. Meanwhile, Rep. Peter DeFazio (D-Ore.) has signaled he will sponsor an amendment to the ag appropriations bill that would nullify Kingston’s Monsanto-friendly provision.

If the provision survives DeFazio’s amendment and makes it to the Senate, what are its chances of becoming the law of the land? Corbo suggested that voting on Sanders’ labeling amendment might serve as a proxy for how the upper chamber would treat the House ag subcommittee’s gift to ag biotech. In other words, the Senate is fertile ground for the provision.