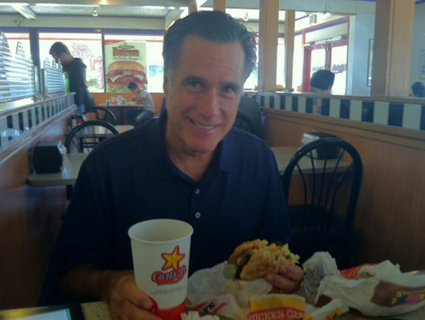 Mitt Romney has a complicated relationship with fast food. He likes pizza, but insists on scraping off the cheese before he ever takes a bite. He likes fried chicken, but only when the skin has been removed. He likes Big Macs, but only after removing the middle bun. He likes Coca-Cola because, he explained in his 2004 book Turnaround, it reminds him of polar bears, but he rarely drinks it because he can’t have caffeine. On the trail, Romney has name-dropped Carl’s Jr. and spoken of the wonders of WaWa but subsists mainly on granola he carries around in one-gallon Ziploc bags.

Fast food’s love for Mitt Romney, on the other hand, is uncomplicated. All told, he’s received $561,582 in contributions from the food and beverage industry, more than any other candidate in the country. (In late May, Romney held a fundraiser at the Louisville mansion of Papa John’s founder John Schnatter.) And it’s not just Mitt—other Republicans get fast-food love, too. Earlier in May, Waffle House, the 24-hour Southern breakfast chain, gave $100,000 to Karl Rove’s super-PAC, American Crossroads, on top of the $80,450 it had already given to Republican causes this year, still well short of the $305,000 it gave exclusively to Republicans between 1997 and 2002. (The company’s CEO, Joe Rogers Jr., was once on the finance team of Romney’s political action committee, Commonwealth PAC.) McDonald’s has directed 57 percent of its political spending to Republican candidates, in keeping with its historical trend. A few steps up the scale, OSI Restaurant Partners, whose chains include Outback Steakhouse, has favored Republicans over Democrats by a rate of 24 to 1. Nationally, the food and beverage industry has given to Republicans at a 70 percent clip. (David Graham has a more exhaustive look at this here.)

They might not get the attention of groups like Wall Street and Big Oil, but as Waffle House’s Crossroads gift made clear, chain restaurants are a core part of the GOP coalition. There’s Herman Cain, formerly of Godfather’s Pizza and the National Restaurant Association, and Tom Monaghan, founder of Domino’s and the wannabe theocratic town of Ave Maria, Florida. Chick-fil-a, which closes on Sundays to observe the Sabbath, gave $2 million to anti-gay groups in 2009. Wendy’s founder David Thomas was a Republican donor and frequent speaker at conservative conferences. When Rep. Darrell Issa (R-Calif.) needed a witness to talk about the Affordable Care Act’s adverse effect on businesses, he summoned Jamie Richardson, vice president of White Castle.

So why is Big Big Mac so conservative? There are a couple of obvious demographic reasons—some of the above companies (and plenty of others) were founded by Southern Christian white dudes, who have a high statistical likelihood of voting Republican anyway. But in his classic book Fast Food Nation, Eric Schlosser flags a policy angle. As Schlosser explains, McDonald’s founder Ray Kroc was largely apolitical—with the notable exception of 1972, when he directed $250,000 toward Richard Nixon’s reelection effort through a variety of state and federal organizations. Kroc had a good reason: His company was lobbying Congress to pass the “McDonald’s Bill,” which would have allowed the company to pay teenagers 20 cents below minimum wage.

Fast-food companies aren’t lobbying for a reduction in the minimum wage these days—at least not openly (since it’s not tracked to inflation, the minimum wage decreases in real value every year anyway). But they have a vested interested in a number of policies that would bring them into conflict with the Democratic party. Among some chain restaurants’ preferred policies: the lowest possible wages for workers and few (if any) benefits; tort reform to discourage lawsuits (McDonald’s, you’ll recall, was the defendant in the famous hot coffee case); anti-union legislation; no new nutritional and food safety standards; and a crackdown on consumer-friendly statutes like the Patients Bill of Rights (fiercely opposed by the National Restaurant Association). Andrew Puzder, CEO of CKE Restaurants Inc., which includes Hardee’s and Romney’s favorite Carl’s Jr., offered a broader critique of the Obama administration’s policies in an op-ed for the conservative outlet Human Events last summer.

In that context, Fast Food’s fundraising for Mitt Romney isn’t much of a mystery at all. And unlike the grub, he’ll take as much of it as he can.