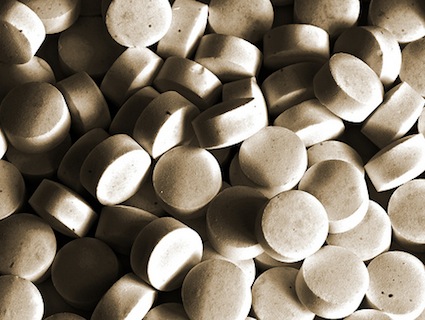 Factory-scale meat producers have a voracious appetite for antibiotics. They use them both to keep animals from falling ill in cramped, filthy conditions; and to make them grow as fast as possible. The mechanism behind that second use is obscure—scientists have known since the ’50s that regular exposure to low levels of antibiotics makes animals grow faster, but have never been quite sure why.

A team of researchers led by New York University microbiologist Martin Blaser might have solved the mystery. Their results suggest that it’s all about how the drugs affect the’ “gut biome”—the billions of bacteria that live inside animals’ digestive tracts (including those of that beast, Man). Antibiotics, of course, are designed to target the pathogenic microbes—the ones that make us and animals sick. But they also attack the beneficial ones—the ones that keep us healthy. The gut biome, also known as the “microbiome”—until recently a very little-studied part of our bodies—is emerging as a major topic of research on human health and immunity to disease.

Previous research has established differences in the gut biomes of lean and overweight people. Blaser and his group found that antibiotic exposure altered the gut biomes of mice—and made them fatter. Here’s how Science News explained their experiment:

That last statement is key: It means that antibiotics give meat producers more bang for every buck of feed. But given that the practice of dosing animals with antibiotics is quite likely generating antibiotic-resistant pathogens that infect people, the real price of that benefit seems steep. How much are we willing to endanger public health in order to generate an abundance of cheap meat?

Interestingly, Blaser also collaborated on another just-published paper on antibiotics and weight gain, this one on humans. He and a research team looked at data from a UK population study in the early ’90s to see if they could find a correlation between antibiotic exposure and kids’ weight.  The study involved more than 11,000 kids, about a third of whom had been given antibiotics before the age of six months. The results (summarized by Science News): the babies who had been exposed to antibiotics had a 22 percent higher chance of being overweight by age three than those who hadn’t.

The researchers did not have have data on the kids’ gut biomes—and of course, as with all population studies, association doesn’t prove causation. But combined with Blaser’s mouse work, the results suggest a possible link between antibiotics and obesity—one that demands more exploration.

Clearly, antibiotics are too important for human health to sacrifice them for a mess of chicken nuggets. When you’re suffering from a severe bout of, say, salmonella poisoning, you want access to antibiotics that work. But they also affect the beneficial ecosystem of microbes that sustain us in unpredictable ways.