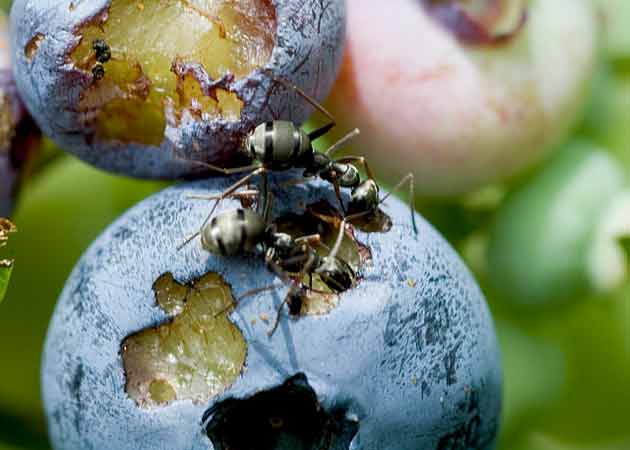 This summer I’ve been on a blueberry tear. I buy a little container from the farmers market or supermarket and open it up as soon as I get home, popping the sweet little orbs into my mouth as I’m putting away my groceries. Only occasionally do I give rinsing them more than a passing thought. After all, I usually splurge for the organic kind. How bad could a little chemical-free dirt really be? Do I really have to wash my innocent-looking blueberries?

According to Sonya Lunder, a senior analyst with the Environmental Working Group, the answer is an unequivocal yes, for several reasons. One is what the produce industry refers to as “pesticide drift”: The wind can—and frequently does—blow chemicals from nearby conventional fields onto organic crops.* Pesticide contamination can also happen in the warehouse, since many produce companies use the same facilities to process organic and conventional products. In that case, companies are supposed to use the label “organically grown” instead of “organic,” which can mislead consumers. “The labels are really confusing,” Lunder says. “When people say they’re transitional organic, there might be traces left in the soil. If you see no-spray, they still might be using synthetic fertilizer, for example.”

But the main reason to wash organic produce is to get rid of germs. “Bacterial contamination is huge,” Lunder says. You might remember, for example, that one of the culprits in the giant E. coli spinach outbreak of 2006 was bagged organic spinach.

So since organic farmers can’t fight germs with chemicals, is their produce more likely to make you sick? In the early 2000s, some news reports said yes. Most quoted Dennis T. Avery and his son Alex, both of the Center for Global Food Issues, a branch of the right-wing think tank the Hudson Institute, whose funders include agribiz giants like Monsanto, ConAgra, and DuPont, as well as ExxonMobil and the Koch Foundation. “For years, organic farming’s true believers have made unsubstantiated charges against mainstream food,” wrote Dennis Avery in a 1999 Hudson Institute piece. “Now they’re being equally careless, ignoring genuine dangers from organic and so-called natural foods.”

E. coli presence seemed to depend more on produce type than on whether it had been raised conventionally or organically.

But Francisco Diez-Gonzalez, a professor of food safety microbiology at the University of Minnesota’s department of food science and nutrition, disagrees. In 2006, he published a study comparing E. coli contamination in organic and conventional produce. He concluded that the presence of E. coli seemed to depend more on the type of produce than whether it had been grown conventionally or organically.

“At this time…there is no sufficient evidence either epidemiological or scientific, to support the idea that organic produce is most likely to carry foodborne pathogenic bacteria,” wrote Diez-Gonzalez in an email. “Despite the apparently logical expectation that if manure is used as one of the predominant fertilizers for organic crops they might be riskier, some factors such as the diversity of manure types, the use of composted manure and the fact that even conventional growers also use manure seem to have an impact on finding any differences.”

The takeaway: Since organic produce isn’t any more or less likely than conventional to carry a scary disease, and since even organic fruits and veggies might contain traces of pesticides on their skins, always wash it, just like you would any other produce. Of course, rinsing your food won’t always remove every single pathogen, Lunder notes, but it’s better than nothing. Since running some water over my blueberries will require approximately 15 seconds of my day, I think I can handle it.

Clarification: A spokeswoman from the USDA organics program points out that certified organic growers must comply with strict rules that reduce the likelihood of pesticide contamination, such as creating buffer zones to prevent pesticide drift and using organic fertilizer instead of synthetic. The USDA does not certify “organically grown” or “transitional organic” produce.