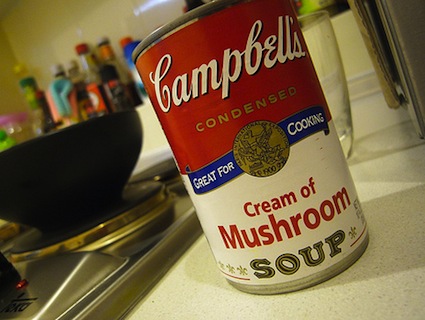 Ordinarily, I’d object to the practice of knowingly subjecting fellow primates to a harmful substance, even for the sake of science. And that’s exactly what researchers from Washington State University and the University of California-Davis did for a study just released in the Proceedings of the National Academy of Sciences (abstract; full study): They fed female rhesus monkeys low doses of the industrial chemical Bisphenol A (BPA).

But I’ll give these researchers a pass. That’s because most of the US public gets its own tiny daily dose of BPA—the stuff is widely used by the food-packaging industry, and traces of it leach out through metal cans and other food and beverage containers. A 2003 survey (summarized here) conducted by the Centers for Disease Control and Prevention found detectable levels of it in 93 percent of urine samples in Americans six years old and older—and these findings are “considered representative of exposures in the United States,” the National Institute of Environmental Health Sciences states.

What is this constant exposure to BPA doing to us? That’s the legitimate question the WSU/UC-Davis team was examining when they spiked the diets of gestating female rhesus monkeys—a species with a reproductive system very similar to humans’—with levels of BPA equivalent to what most Americans get through their diets. And what they found is disturbing: “New evidence that the plastic additive BPA can disrupt women’s reproductive systems, causing chromosome damage, miscarriages and birth defects,” as the WSU web site put it in a summary.

What’s more, the changes they identified affected not only the mother, but also the female offspring’s own ovaries—meaning that BPA exposure can cause trouble across generations. Here’s how WSU geneticist Patricia Hunt, who coauthored the study, put it on the WSU web site:

The concern is exposure to this chemical that we’re all exposed to could increase the risk of miscarriages and the risk of babies born with birth defects like Down Syndrome…The really stunning thing about the effect is we’re dosing grandma, it’s crossing the placenta and hitting her developing fetus, and if that fetus is a female, it’s changing the likelihood that that female is going to ovulate normal eggs. It’s a three-for-one hit.

Hunt’s new study bolsters similar findings from research based on mice. And it comes on the heels of another recent study on BPA-exposed rhesus monkeys, this one finding that the substance alters the development of mammary glands, increasing the risk of breast cancer. I’m aware of two other peer-reviewed studies BPA studies on rhesus monkeys, both of which sought to test whether mouse studies are a good proxy for gauging BPA’s effects on human health. One, a 2010 effort by FDA researchers, found that rodent studies might “overpredict” the effects of BPA on primates; the other, conducted in 2011 by a research team that included WSU’s Hunt, found that female mice, monkeys, and women process BPA in “very similar” ways—meaning that previous BPA research on mice applies to women.

Meanwhile, yet another recent study, this one from New York University researchers looking at BPA level in kids’ urine, found a strong association between the industrial chemical and obesity in kids. The researchers looked at a “nationally representative subsample” of 2,838 kids aged 6 through 19, selected randomly selected for the National Health and Nutrition Examination Surveys of 2003-08. Although the NYU study is far from definitive—it established correlation, but not causation—it adds to a growing body of literature suggesting that BPA is contributing to rising obesity rates.

The industry insists that the trace amounts of BPA are perfectly safe, and BPA manufacturers Bayer and Dow lavish millions in annual lobbying outlays in DC.

So where is the chemical industry and the Food and Drug Administration in all of this? For the industry, BPA is big business—as you might expect from a substance that’s in the lining of almost all US metal cans. According to Bloomberg, the global market for BPA is worth $8 billion—and its biggest US makers are heavyweights Saudi Basic Industries (70 percent owned by the Saudi government), Bayer, and Dow.

The industry insists that the trace amounts of BPA that makes its way from food containers into our bodies are perfectly safe, and Bayer and Dow lavish millions in annual lobbying outlays in DC, in part to promote that view, as does the virulently pro-BPA chem industry trade group the American Chemistry Council.

The FDA agrees—sort of. “The Food and Drug Administration’s assessment is that the scientific evidence at this time does not suggest that the very low levels of human exposure to BPA through the diet are unsafe,” the agency’s BPA web page states. Not exactly a ringing endorsement, but enough to keep FDA from banning the substance.

Earlier this year, the FDA did ban BPA in baby bottles and sippy cups. But it turned out that even that move was a bow to industry of sorts—the ban had been proposed by the American Chemistry Council itself. Why would the industry seek the ban? Its petition to the FDA puts it plainly: “All Major [Baby] Product Manufacturers Have Abandoned the Use of Polycarbonate Resins” (BPA). In other words: Go ahead and ban it—it’s already been phased out. The FDA’s big move on BPA delivered little more than the appearance of strict oversight.

And of course, as the latest monkey research shows, BPA appears to cause real harm before babies ever get close to a sippy cup—when they’re still in the womb. We’ll see if the FDA musters the gumption to act now.