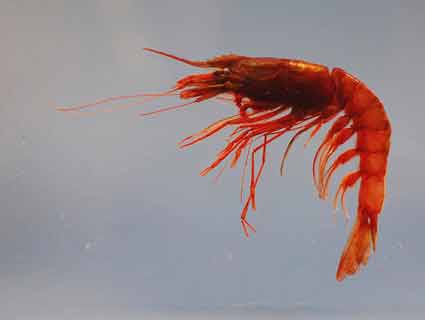 If you eat a lot of fish, likely as not you’re eating something that was raised on a farm and hauled in from thousands of miles away. According to NOAA, we import about 86 percent of the seafood we consume, about half of which comes from from aquaculture. And just because you find it in a gleaming supermarket fish case or on a well-presented restaurant plate doesn’t mean it’s safe to eat.

Over at Bloomberg Businessweek, there’s a pretty startling piece on the sanitary conditions on some of those farms. In Vietnam, farmed shrimp bound for the US market are kept fresh with heaps of ice made from tap water that teems with pathogenic bacteria, Businessweek reports. Tilapia in China’s fish farms, meanwhile, literally feed on pig manure—even though it contains salmonella and makes the tilapia “more susceptible to disease.” Why use hog shit as feed? Simple—it’s cheap, and China’s tilapia farms operate under intense pressure to slash costs and produce as much cheap tilapia as possible.

And, as Wired‘s Maryn McKenna showed in a post earlier this year, harmful bacteria like salmonella aren’t the only potential health problem associated with Asia’s fish and shrimp farms. There’s also the threat of residues from the chemicals farm operators use to control those pathogens. Like US meat farmers, Asia’s shrimp farmers rely heavily on antibiotics, traces of which can stay in the shrimp. And many of the antibiotics in use on Asia’s fish farms are banned for use in the United States for public health reasons.

Now, you might think that the Food and Drug Administration, which is charged with overseeing the safety of the food supply, is protecting us from potential harm from these products. The agency is certainly aware of the problem. Testifying before Congress in 2008, then FDA deputy director of food safety Don Kraemer put it like this:

As the aquaculture industry continues to grow, concern about the use of unapproved drugs and unsafe chemicals in aquaculture operations has increased significantly. There is clear scientific evidence that the use of unapproved antibiotics and other drugs and chemicals, such as malachite green, nitrofurans, fluoroquinolones, and gentian violet, can result in the presence of residues in the edible portions of aquacultured seafood.

Yet the FDA only inspects about 2.7 percent of imported food, Businessweek reports. And that number relates to visual tests for whether something is obviously rotting or filthy, Patty Lovera, assistant director of Food & Water Watch, told me. Lab tests for chemical residues, which wouldn’t be visible, are much less common. In a scathing 2011 report, the General Accounting Office found that in fiscal 2009—the year after Kraemer’s testimony—”FDA tested about 0.1 percent of all imported seafood products for drug residues.”

In China, from which we import massive amounts of farmed seafood, the FDA had inspected just 1.5 percent of seafood processing facilities over the previous six years.

When the agency does test, it does find. For example, in 2008, GAO found, the FDA tested only 34 shrimp samples for residues of nitrofurans—a chemical not approved in the United States for aquaculture and one specifically singled out in Kraemer’s FDA testimony for its ability to cause cancer. Six of the samples tested positive. “Because of FDA’s limited sampling, some of the more than 2.5 million metric tons of shrimp and 156,000 metric tons of catfish imports that entered the United States during fiscal years 2006 through 2009 could have contained residues of nitrofurans,” the GAO report warned.

Another way the FDA tries to stem the flow of chemical-tainted seafood into the US is through inspecting processing facilities in exporting countries. But here, too, the program is lax. In China, from which we import massive amounts of farmed seafood, the FDA had inspected just 1.5 percent of seafood processing facilities over the previous six years, the GAO found.

Lovera, whose group Food & Water Watch produced an eye-popping 2008 report called “Suspicious Shrimp: The Health Risks of Industrialized Shrimp Production,” told me that the FDA has done little to change its seafood-inspection system since the GAO report. “It’s a resource question but it’s also a political-will question, because when you look harder, you will find stuff,” she said. And that means friction with important trade partners like China. She said that given the scope of the problem, the FDA should visually inspect at least 10 percent of the seafood coming in at least for a while, which would send a message to exporting countries to clean up their acts.

Meanwhile, there’s plenty of evidence that the current system is failing. According to a recent study by the Centers for Disease Control and Prevention, a quarter of the food-borne illness outbreaks caused by imported food from 2005 to 2010 involved seafood—more than any other food commodity. In May, ABC News bought 30 samples of imported farmed shrimp from across the country and had them tested for antibiotic traces. The result: Three of the samples contained detectable levels of antibiotics. And not just any antibiotics, either:

Three different banned drugs were found in the shrimp: enrofloxacin, an antibiotic not allowed in animals that Americans eat because it damages the immune system; chloramphenicol, suspected to cause cancer in humans; and confirmed carcinogen nitrofuranzone, which was outlawed in the US 40 years ago.

And the ABC results may be understating things. According to a January 2012 report in the Vietnamese press, Japan repeatedly found excess levels of enrofloxacin in shrimp in 2011. These examples might seem small, but given how much shrimp Americans eat and how little of it is tested, those results surely suggest that the FDA needs to ramp up its oversight.