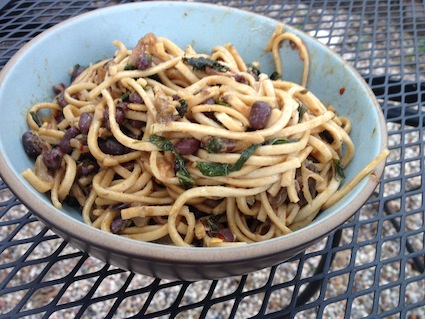 Last weekend’s farmers market in Austin had me a bit flummoxed. It was an unseasonably cold morning in Austin—I was shivering in a sweater—but the wonderful farm Johnson’s Backyard Garden was offering gorgeous purple-streaked eggplants, and not tiny ones, either. To me, eggplant is the ultimate hot-weather crop. One of the farm’s workers let me know that the season’s bumper eggplant harvest had reached its end; these would likely be the season’s last.

So I had to get a couple. But what do do with them? Normally, I like to pair eggplant with other summery stuff like tomatoes and basil. But at this farmers market, what was looking best was kale: a classic fall-season crop that had clearly been thriving in Central Texas’ mild recent weather, judging from the abundance of it on display.

So my mind drifted away from Mediterranean possibilities for eggplant and shifted toward an Asian one: a noodle dish combining eggplant and kale, lashed with ginger, soy sauce, and rice vinegar.

To prepare the eggplant, I used a technique taught to me by my friend Hich Elbetri, proprietor of the excellent Sandwhich in Chapel Hill, N.C. You slice the eggplant thickly, toss it in oil, and then roast it in a hot cast-iron skillet at high heat until it’s caramelized. Since I already had the hot skillet and stove, I decided to give the same treatment to the kale.

To add a little protein to the dish, I first considered going out and getting some tofu. Then I remembered that I have never been able to consistently nail tofu. For every time I’ve gotten it right, I’ve achieved five incidents of greasy, limp, or leathery bean curd. I didn’t feel like rolling the dice, especially since I knew I would commemorate the dish in a column. So I turned to that Tom’s Kitchen staple, a can of beans: in this case, Adzuki beans, small, red, flavor-packed legume widely used in northern Asia (though usually mashed into a sweet paste, not as a savory addition to noodles). So what I ended up with was a what the Italians call pasta e fagioli—noodles and beans—but with added veggies and an Asian flavor profile. Not “authentic” to any single cuisine, but delicious nonetheless. 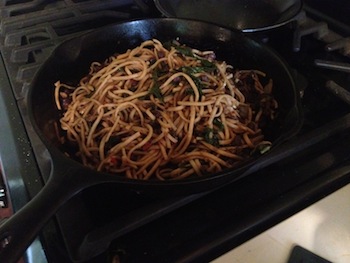 Ingredients:
1 medium eggplant, cut crosswise in ½ inch slices, each slice quartered into wedges
1 tablespoon vegetable oil (I used grapeseed)
Your best soy sauce (my favorite is Ohsawa Organic)
1 onion, chopped
1 red-hot chile pepper, minced
3 cloves garlic, minced
1 knuckle-sized chunk of ginger, peeled with the edge of a spoon and minced
1 bunch of kale, chopped
1 8-oz package of whole-grain Udon noodles (in a pinch, regular whole wheat pasta will do).
1 can of Adzuki beans (black or white beans will also do), mostly drained, but with a tablespoon or two of liquid remaining
Rice vinegar
1 tablespoon miso, stirred into a one-quarter cup of hot water
Sesame oil

Put a large cast-iron skillet into oven. Turn heat to 450, and allow to heat. Meanwhile, in a bowl, toss the eggplant pieces in just enough oil to coat them evenly. When the oven has come to full heat and the skillet is very hot, carefully add the eggplant to the skillet and toss with a spatula. Return the skillet to the oven. After a few minutes, toss the eggplant pieces around with a spatula, and return to the oven. Remove them to a bowl when they are cooked through and lightly brown. Give them a good lashing of soy sauce, toss them to combine, and set aside.

With the oven still on at 450, place the hot skillet on the stovetop—taking great care not to grab the handle with bare hands; I usually put a towel over it to remind myself—and turn heat to medium. Add enough oil to cover the bottom, and add the onions. Let them cook a few minutes, stirring occasionally, until they begin to soften, and then add the minced pepper, garlic, and ginger. Stir to combine, let it sizzle a minute, and then add the chopped kale and a good lashing of soy sauce. Stir, and return to oven. Let the kale roast in the oven, stirring once or twice, until it is tender. When it is, give it a good drizzle of rice vinegar, stir, and add the kale to the bowl with the eggplant, and turn off the oven.

Return the hot pan to the stove-top—again, taking precautionary measures not to directly touch the handle. Put heat to medium, and dump in the beans, which will have a bit of liquid. Using a wooden spoon, scrape the bottom of the pan, releasing any brown, caramelized bits clinging to it from the eggplant and kale cooking processes. Turn heat to low, and gently heat the beans, adding good dashes of rice vinegar and soy sauce.

Now prepare the udon noodles according to the instructions on the box.

When the noodles are almost done, stir the reserved eggplant and kale into the skillet with the beans. Stir to combine. Turn heat to medium. Add the cooked, drained, and rinsed noodles, and stir-fry a bit. Taste for seasoning.

Now, when I got to this point, I found the dish plenty spicy, garlicy, and gingery, but somehow lacking. So I decided to ramp up the umami—and nonauthentic, improvisational nature of the dish—with a bit of miso, the great Japanese bean paste. So I stirred in the miso/water mixture (see ingredients), along with a few dashes of sesame oil and another few of soy sauce and rice vinegar. This time, it was really good.