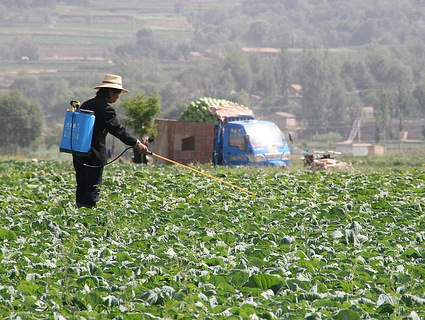 Last week, I took Dr. Oz to task for painting organic foods as a luxury item that distracts working families from the important task of eating healthily and frugally. My riposte: It’s the pesticides, stupid. The NYT’s Mark Bittman has a column on the ongoing menace of pesticides, and he tags several things I missed in my piece. To wit:

I was impressed by a statement by the American Association of Pediatrics—not exactly a radical organization—warning parents of the dangers of pesticide and recommending that they try to reduce contact with them. The accompanying report calls the evidence “robust” for associations between pesticide exposure and cancer (specifically brain tumors and leukemia) and “adverse” neurodevelopment, including lowered I.Q., autism, and attention disorders and hyperactivity.

In other words, mainstream doctors who care about kids are now expressing concern about exposure through food. The AAP’s recent technical report states: “In the general population, the food supply represents the most important source of exposure for organochlorines and OPs [organophosphates]. For pyrethroids, both food residues and household pest control products are important sources.” The report adds that eating organic food “may lower pesticide exposure,” pointing to a study that showed a “rapid and dramatic drop” of dangerous pesticide metabolites in the urine of kids who switched to an organic diet.

He paints a convincing picture of a nation quietly, unknowingly awash in a cocktail of pesticides:

Because every human tested is found to have pesticides in his or her body fat. And because pesticides are found in nearly every stream in the United States, over 90 percent of wells, and — in urban and agricultural areas — over half the groundwater. So Department of Agriculture data show that the average American is exposed to 10 or more pesticides every day, via diet and drinking water.

Bittman might have added that we have precious little research on the synergistic effects of pesticides: the fact that they may affect us differently and more powerfully when we ingest them in combination. That is, the whole coctkail of pesticides we confront daily may be worse than the sum of its parts.

All of which reminds me there’s something else I left out of my Oz post: Pesticide Action Network’s What’s in My Food? tool, an almonds-to-winter-squash database that lets you look up USDA pesticide-trace data on common foods, and also compare pesticide loads of the conventional and organic version of each product. Sample: My beloved kale has a toxic rap sheet as long your arm when grown conventionally, but looks pretty good when grown organically. Here’s the comparison for DDE, a nasty chemical found on 27 percent of conventional kale samples: 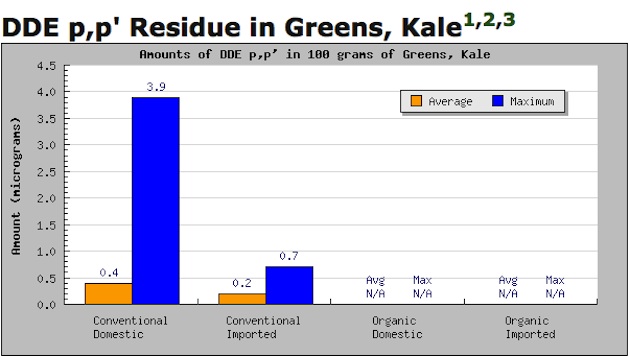