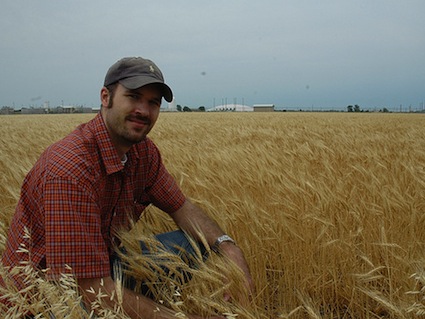 Globally, 2012 will likely rank as one of the ten hottest in recorded history, The New York Times reports. If it does, “it will mean that the 10 warmest years on record all fell within the past 15 years, a measure of how much the planet has warmed.” Here in the US, last year was far and away the hottest ever on record. In other words, climate change is no longer a theory or a model or an abstract worry involving future generations. It’s happening, now—and if you want to see its likely effect on farming, look at the breadbasket state of Kansas, where the same prolonged drought that reduced corn and soy yields is now pinching the winter wheat crop, as I wrote a few days ago. On Wednesday, the UDSA declared much of the wheat belt a disaster area because of the drought’s effect on the crop.

What would a farming system designed to meet the challenge of climate change look like? US policymakers have bought themselves time to consider that question. Since the Great Depression, US farm policy has been governed by five-year plans known as farm bills, which shape the agricultural landscape through a set of government-funded incentive programs. The previous farm bill expired last year, and Congress failed to come up with a new one, instead patching a one-year, modified extension of the old one to the fiscal cliff deal. That means 2013 will be another farm bill year; another opportunity to come up with climate-ready farm policy.

OK, that last clause was sarcastic. So far, Congress and the White House have shown very little appetite for anything like meaningful farm policy reform. Confirming the power of the Big Ag lobby, all the versions of the farm bill that circulated last year (Senate; House ag committee), and the last-second extension hammered out on Jan. 1,  maintained incentives for farmers in the US heartland to stay hyperfocused on producing as much of a few chosen crops like corn, soy, and wheat as possible—an ongoing fixation with the same chemical-intensive, monocrop farming that has blanketed the Midwest since World War II and is now beginning to show serious vulnerability to climate change.

But if there were one concept I wish members of the House and Senate ag committees, as well as USDA decision makers, could grasp as we head into farm bill season, it’s this: by diversifying away from the old corn-soy-corn rotation and adding off-season, nitrogen-fixing cover crops to the mix, farmers dramatically decrease their reliance on chemical fertilizers and toxic herbicides, while maintaining yields. That lesson is driven home in what I consider to be the most important ag research released in 2012: the Leopold Center for Sustainable Agriculture’s report on a set of field experiments it conducted at Iowa State University.

The study looked at fields under three kinds of rotations over nine years: the common two-year corn-soy rotation, a three-year rotation that adds oats with a nitrogen-fixing cover crop, and a four-year rotation that adds hay (alfalfa) to the mix. The result: The more diverse systems reduced the need for synthetic nitrogen fertilizer—an energy-intensive, water-polluting substance—by a stunning 86 percent, while maintaining yields. And that’s not all, Leopold reports:

Diverse rotations … enrich the soil with plant-available nitrogen and organic carbon, break disease and weed cycles, and diminish erosion by putting living roots and cover on the ground. They protect nearby waterways from pollution and reduce the risk of creating herbicide-resistant weeds. These environmental benefits improve over time. After nine years, herbicide inputs in the diverse rotations were 7 to 10 times lower, and herbicide-related freshwater toxicity 200 times lower, compared to the conventional system. Diverse rotations used 48 to 51 percent less energy per acre per year compared to the conventional system.

What does all of this have to do with drought? By planting off-season legume cover crops, farmers don’t just add nitrogen to soil (legumes have the magical property of grabbing nitrogen from the air and depositing it in their roots, thus fertilizing soil). All the roots they leave behind also add organic matter to soil, which helps it hold water—a precious characteristic when water runs short.

A recent article by the Minnesota-based Land Stewardship Project shows how diversification pays off in real world conditions. The piece looks at a group of farmers in North Dakota, in an area that gets an average of just 16 inches of rain per year, “making water a dear resource.” Low amounts of water, combined with conventional farming techniques, was making the once-rich land harder and harder to farm productively. Here’s what had happened:

What farmers … and soil scientists in the area were starting to figure out was that the production system that had come to predominate—extensive tillage, low crop diversity, no cover crops, livestock kept out all-season long on overgrazed pastures—was compacting the soil to the point where little water could make its way beneath the surface. It was also sharply reducing the amount of soil organic matter, which drives the entire soil food web. Unbroken prairie soils can have as much as 10 percent to 15 percent organic matter. But because of intensive tillage, Midwestern soil organic matter levels have plummeted to below 1 percent of total soil volume in some cases. This means the soil has little opportunity to cook up its own fertility via the exchange of nutrients, making it increasingly dependent on applications of petroleum-based fertilizers.

The farmers tried heroic measures to work water into the soil, such as “putting in grassed waterways in an attempt to keep water from running off so quickly.” The techniques “helped, but didn’t get at the core of the issue: Why was that water not infiltrating the soil in the first place?” Then, about a decade ago, they turned their attention to building organic matter in the soil through cover-cropping—and the change was dramatic. Farmers in the area have seen the level of organic matter more than double over the past decade, and now produce robust stands of corn and other crops in “a part of North Dakota that has been hit especially hard by drought.”

They’ve done so by seeing their soil, and not the next crop they squeeze out of it, as their key investment. And that’s the exact opposite of the approach encouraged by federal farm policy, which pushes farmers to plant as much as possible and then subsidizes crop insurance against losses—giving them no incentive to build organic matter in soil.

The takeaway for policymakers is simple: Quit rewarding farmers for maximizing yield and start paying them to build organic matter in their soil. One exceedingly simple measure would be to pay farmers to plant cover crops. The result would be an ag system that is much more ready for the long, hot, dry spell that’s coming.