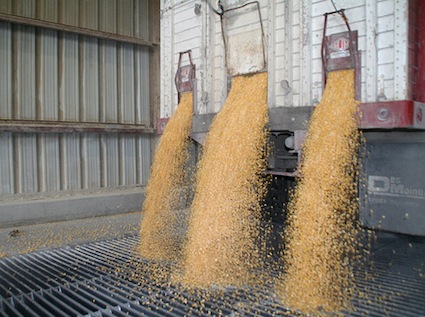 Corn gushes from the back of a truck into an ethanol plant in Iowa. <a href="http://www.flickr.com/photos/breadfortheworld/6377989873/">Bread for the World</a>/Flickr

I used to write about biofuels a lot. The idea of devoting large swaths of prime farmland and annual gushers of agrichemicals to grow “fuel” crops—not to be eaten but to be set aflame in automobile engines—struck me as so nakedly stupid, so willfully ignorant, that surely pointing it out could help change policy. And so point it out I did, in dozens of blog posts and articles per year starting in 2006. (Here, here, here, here, and here are a few highlights). But the US and EU governments brushed off my verbal assault, maintaining their escalating biofuel mandates. Long about 2011, I realized that some blogger’s crusade was never going to affect policy, so I largely stopped writing about the topic out of discouragement and, yes, boredom.

Elisabeth Rosenthal’s excellent New York Times article on the effect of US/EU biofuel policy in Guatemala has knocked me out of my torpor. Rosenthal lucidly explains the double pinch the biofuel craze puts on citizens of developing nations. For urban residents, the US biofuel mandates—now sending 40 percent of the US corn crop into ethanol production—are pushing up the price of corn, a staple food in Guatemala. Rosenthal points to an Iowa State University study estimating that US biofuel policy added about 17 percent to global corn prices in 2011—bad news for people who rely on tortillas as a staple. “Just three years ago, one quetzal—about 15 cents—bought eight tortillas; today it buys only four. And eggs have tripled in price because chickens eat corn feed,” she writes. The result is dire:

In a country where most families must spend about two thirds of their income on food, “the average Guatemalan is now hungrier because of biofuel development,” said Katja Winkler, a researcher at Idear, a Guatemalan nonprofit organization that studies rural issues. Roughly 50 percent of the nation’s children are chronically malnourished, the fourth-highest rate in the world, according to the United Nations.

And for Guatemala’s subsistence farmers, biofuel mandates in the Global North mean less land for growing food. The country’s lush farmland is largely “owned by a handful of families,” Rosenthal reports, and they’re finding it much more profitable to grow sugarcane and palm to satisfy Europe’s biofuel mandates than to rent it to peasant farmers to grow food. The change in land use has been rapid and stark: “Suchitepéquez Province, a major corn-producing region [for domestic food consumption] five years ago, is now carpeted with sugar cane and African palm.”

Pushed aside, small-scale farmers are scrambling for access to land. The article opens with a farmer who has had to resort to growing his family corn on the median of a busy highway. As a Guatemalan farm advocate told Rosenthal, “There are pros and cons to biofuel, but not here…These people don’t have enough to eat. They need food. They need land. They can’t eat biofuel, and they don’t drive cars.”

Guatemala isn’t an isolated case. “In a globalized world, the expansion of the biofuels industry has contributed to spikes in food prices and a shortage of land for food-based agriculture in poor corners of Asia, Africa and Latin America because the raw material is grown wherever it is cheapest,” she writes.

Now, optimists might argue that a rising biofuel-export industry will at least bring much-needed jobs to Guatemala. But growing vast monocrops of sugarcane and palm are “not labor-intensive,” Rosenthal writes. So far, they’ve created 60,000 and 17,000 jobs, respectively—not many in a country with a population of more than 14 million.

Others, like the authors of this 2012 USDA report, might point to Brazil and its prodigious sugarcane ethanol industry as a harbinger of hope for Guatemala. Brazil, an industrial-agriculture powerhouse, has used domestically produced sugarcane derived ethanol to become largely petroleum-independent. But as noted above, Guatemala needs food more than it needs car fuel—it has 68 cars per 1,000 residents, versus 209 for Brazil (and about 800 for the United States). And nearly all of the biofuel crops it produces are for export, anyway.

Moreover, Brazil’s sugarcane ethanol program is way overblown as environmental and social policy, as Nikolas Kozloff showed in a blistering 2010 Foreign Policy piece. The nation’s voracious demand for sugarcane-derived ethanol is actively wiping out what’s left of the Atlantic rainforest, indirectly contributing to the destruction of the Amazon rainforest, and using huge amounts of greenhouse-gas-emitting nitrogen fertilizer, Kozloff shows. As for jobs, Guatemalan workers should be wary of the Brazilian example. Here’s Kozloff:

Today the Brazilian sugar cane industry is centered in the state of São Paulo—drive just an hour out of the city and you can see sugar cane fields stretching for hundreds of miles. Palmares Paulista is a rural agricultural town 230 miles from São Paulo. Behind rusty gates lies a squalid red-brick tenement building. Inside, weary migrant workers breathe the stale air and try to prepare themselves as best they can for the long day ahead. The cortadores de cana, or sugar cane workers, are crammed into tiny cubicles filled with rickety bunk beds and unpacked bags. They hail from the poverty-stricken, drought-plagued northeast and earn paltry wages.

Already, Guatemala’s sugarcane industry is beset by allegations of exploitation and child labor.

In short, government-mandated biofuel production remains what it was when I began writing about it almost a decade ago: a boondoggle, an excuse for avoiding true steps to mitigate climate change, like investing in mass transit and clean energy solutions like wind and solar. Unfortunately, it doesn’t appear to be going away anytime soon.