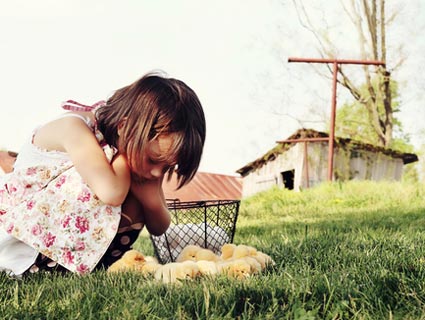 In the early 20th century, political ads for then-presidential candidate Herbert Hoover promised Americans continued prosperity, or a “chicken in every pot.” But today, in a new era of ecological crises, does our ability to feed ourselves in the future hinge on a chicken in every backyard?

This was one of the ideas explored at last night’s panel of food journalists, moderated by New York Times contributing columnist Allison Arieff and co-sponsored by Mother Jones and the San Francisco Planning and Urban Research Association (SPUR). Addressing a room of 70-90 modern farmer types, urban-planners, and Bay Area locals, Mother Jones‘ Tom Philpott, Earth Island Journal‘s Jason Mark, and former Grist.org editor Twilight Greenaway discussed issues taking up the most space on their plates, along with their vision for the future of the sustainable food movement. You can listen to their conversation here:

“The implication that we can vote with our fork will only get us so far,” said Philpott, who went on to critique the idea that consumer choice and a backyard crop alone can reverse an entrenched trend of industrialized and consolidated control of the food supply. “The infrastructure for [small] farms doesn’t exist,” he said. “The only policy solution is federal policy.”

One way to legislate change would be through anti-trust laws that dismantle Big Ag’s grasp on production, Philpott explained, but even so, the sustainable food movement is dealing with its own internal struggles in attempting to expand. “What’s the sweet spot for scale for the sustainable food movement?” asked Jason Mark. While organic farmers are still negotiating the balance between quality and affordability of their products, “It’s a rational choice to buy junk food instead of healthy food,” Mark added.

But as stubborn as the status quo may be, panelists also shared stories about small, ecology-minded innovation in the age of engineered shmeat (“meat grown on a sheet,” Twilight Greenaway explained). Greenaway also discussed polyculture experiments in the Long Island Sound, and panelists bounced insights off one another about the challenges and promises of biotech in the sustainability movement. “We’ve got this beautiful niche happening,” Philpott said of efforts to de-industrialize food production in the last decade. “But staying away from self-satisfaction,” he added, “is paramount.”