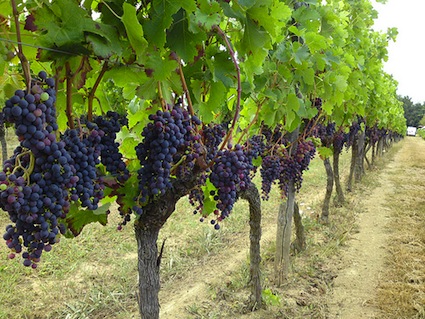 There's a place in France, where the pesticide molecules dance. <a href="http://www.flickr.com/photos/mrmorodo/5714569722/">Tempus Volat</a>/Flickr

Oddly for someone who loves to cook and eat as much as I do, I have a reputation among friends as a bit of an appetite spoiler. When I’m not going on about various grotesque aspects of factory-farmed meat, I’m informing you of arsenic in apple juice and rice, or the knotty paradoxes of quinoa. What beloved foodstuff will I take on next? Well, be assured, this one pains me as much as anyone else: A recent study of French wine found 90 percent of samples contained traces of at least one pesticide, the wine trade journal Decanter reports.

Encouragingly, all of the individual pesticide residues appeared at levels below limits set by the French environmental agency. But some samples turned up with as many as nine separate pesticides. And as I’ve written before, groups of pesticides may have so-called “cocktail” or “synergistic” effects—that is, a pesticide mix may be more toxic than the sum of its parts. As Pascal Chatonnet, head of the research firm that conducted the test of French wines, told Decanter, “There is a worrying lack of research into the accumulation effect, and how the [pesticide] molecules interact with each other.”

Plus, as Chatonnet pointed out to Decanter, “we should not forget that it is not the consumers who are most impacted by this, it is the vineyard workers who are applying the treatments.”

The class of pesticides that showed up most often were fungicides. According to Decanter, vineyards occupy just 3 percent of French farmland, but account for 20 percent of the nation’s overall pesticide use and 80 percent of its fungicide use.

Interestingly, Chatonnet is a winemaker himself—his family runs vineyards in Bordeaux, and he also has his own vineyard. The wine analysis lab that Chatonnet founded in 1992, Excell, conducted the pesticide tests. The Chatonnet wines aren’t organic. So in France, at least some elements of the wine industry are confronting the pesticide problem head on, in a spirit of transparency—much as California’s Lundberg family is openly discussing the problem of arsenic traces in even organic rice.

Chatonnet’s study comes on the heels of a 2008 survey by Pesticide Action Network UK finding similar results in wines from across Europe (plus one each from Australia, South Africa, and Chile). What about US-made wines? I know of no residue studies of domestically produced wines; but, like in France, conventional viticulture here tends to be pretty pesticide-intensive.

So, does all this mean I’m giving up wine? Of course not. But I will push harder to find good organic ones. In that Pesticide Action Network UK study of European wines, all 34 conventional samples tested showed pesticide residues, while only one of six organic ones did.