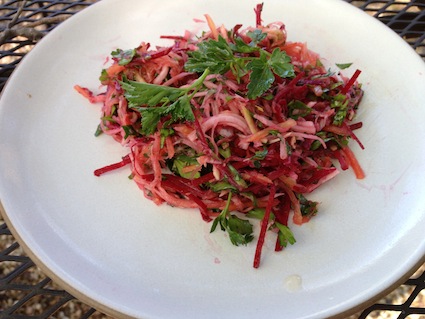 In most areas of the country, late March is one of those awkward times to shop at the farmers market. Glamorous spring vegetables like asparagus and artichokes aren’t in yet; winter staples like beets, carrots, and radishes are still coming out, but you’re starting to get bored of them. That’s the exact situation now playing out in Central Texas, with the added annoyance that my favorite veggies of all, leafy greens, are already on the way out, laid low by the fast-warming weather.

Even so, I was able to coax a fresh, fun dish out of what was abundant at the farmers market: beets, kohlrabi (a bulbous relative of broccoli, cabbage, and the rest of the brassica family), carrots, and spring onions. What inspired me was a gadget that has been stuck on a low shelf of my kitchen, unused, for years: a mandoline. I had always thought of mandolines as fancy devices that I would never be able to afford. When my mom gave me this inexpensive, plastic Japanese-brand model as a gift a few years ago, I never got around to trying it out. As an experiment, I decided to subject my market bounty to its razor-sharp blades, and came away impressed: a zippy, crunchy salad that tasted like spring on a salad plate, not winter warmed over.

You can make a very similar, slightly less attractive salad by simply grating the veggies, or slicing them as thinly as possible. Use any combo of winter veggies—except, of course, for ones that really need to be cooked to be enjoyed, like potatoes. The combo I used brought together sweet (carrots), earthiness (beets), and spice (kohlrabi), as well as a great clash of colors. A radish or two would also have been nice. It’s also important to brighten the dish with plenty of herbs—parsley and mint work great—as well as a tart dressing.

2 carrots, peeled
1 beet, peeled
2 kohlrabi bulbs, peeled
1 bunch parsley, “disciplined.”* (Note: Some fresh mint would be great here, too, if you have it; I didn’t.)
1 spring onion, white part, and/or a small clove of garlic
1 tablespoon extra-virgin olive oil
3 tablespoons apple cider vinegar (Note: Replacing one tablespoon of the vinegar with a good squirt of fresh lemon juice would be advisable—I didn’t have lemon on hand.)
Pinch of sea salt
Pinch of dried peppermint (optional)
Freshly ground black pepper 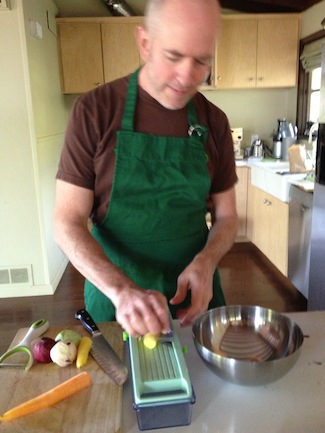 Time to mandoline up.

Using the medium attachment blade of Benriner mandoline, carefully shred each of your veggies down to matchsticks. Be sure to use the finger guard! Alternatively, carefully grate them on the coarse side of a regular box grater. Place shredded veggies into a bowl, add the parsley, and mix it all, gently but thoroughly, with your hands. Now make the dressing. Coarsely chop the spring onion and add it to the mortar of a mortar and pestle. Top it with a pinch of sea salt, a pinch of peppermint, if using, and a good grind of pepper. Pound it into a paste. Add in the oil and vinegar. Mix well. (Alternately, you can mince the onion on a cutting board, also topping it with salt, etc., until it has formed a paste. Put it in a small jar with the oil and vinegar and shake well.)

This slaw makes a great side dish to fish or chicken, and holds up well the next day.

* As the great UK chef Fergus Henderson put it in a recipe in his immortal The Whole Beast: Nose to Tail Eating, “lightly chop your parsley, just enough to discipline it…”