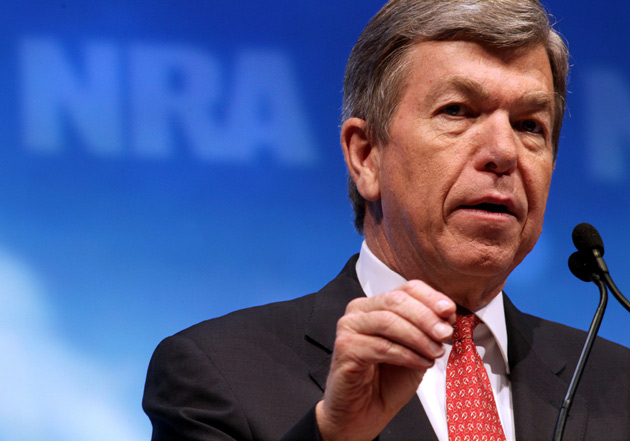 As I reported a couple of weeks ago, a recent Senate bill came with a nice bonus for the genetically modified seed industry: a rider, wholly unrelated to the underlying bill, that compels the USDA to ignore federal court decisions that block the agency’s approvals of new GM crops. I explained in this post why such a provision, which the industry has been pushing for over a year, is so important to Monsanto and its few peers in the GMO seed industry. (You can also hear my talking about it on NPR’s The Takeaway, along with the senator who tried to stop it, Montana’s Jon Tester, and see me on Al Jazeera’s Inside Story.)

Which senator pushed the rider into the bill? At the time, no one stepped forward to claim credit. But since then, Sen. Roy Blunt (R-Mo.) has revealed to Politico‘s ace reporter David Rogers that he’s the responsible party. Blunt even told Rogers that he “worked with” GMO seed giant Monsanto to craft the rider.

The admission shines a light on Blunt’s ties to Monsanto, whose office is located in the senator’s home state. According to OpenSecrets, Monsanto first started contributing to Blunt back in 2008, when it handed him $10,000. At that point, Blunt was serving in the House of Representatives. In 2010, when Blunt successfully ran for the Senate, Monsanto upped its contribution to $44,250. And in 2012, the GMO seed/pesticide giant enriched Blunt’s campaign war chest by $64,250.

The senator’s blunt, so to speak, admission that he stuck a rider into an unrelated bill at the behest of a major campaign donor is consistent with the tenor of his political career. While serving as House whip under the famously lobbyist-friendly former House Majority leader Tom DeLay (R-Texas) during the Bush II administration, Blunt built a formidable political machine by transforming lobbying cash into industry-accomodating legislation. In a blistering 2006 report, Public Citizen declared Blunt “a legislative leader who not only has surrendered his office to the imperative of moneyed interests, but who has also done so with disturbing zeal and efficiency.”

In a profile of Blunt published the year before, the Washington Post‘s Thomas B. Edsall wrote that Blunt had “converted what had been an informal and ad hoc relationship between congressional leaders and the Washington corporate and trade community into a formal, institutionalized alliance.” According to Edsall, Blunt’s relationship to the DC lobbying scene rivaled that of DeLay’s, who would later be hounded out of the House after being indicted for ethical lapses. Edsall writes:

Both “Blunt Inc.” and “DeLay Inc.” reflect the growing importance of commanding multimillion-dollar funds and having reliable loyalists in Washington’s lobbying community. Blunt and DeLay are fundraising powerhouses. Their political organizations use multiple fundraising committees, have rewarded family members and have provided an avenue to riches for former aides now in the private sector.

Blunt’s connections to lobbyists extend to his family. His wife, Abigail Blunt, serves as head of US government affairs for the processed food giant Kraft. In 2012, the Hill placed Abigail Blunt on annual its list of “top lobbyists.” That same year, Kraft joined Monsanto in shoveling cash into the effort to defeat California’s Proposition 37, which would have required the labeling of GMO ingredients in food. Monsanto led donors in the effort with more than $8 million; Kraft chipped in nearly $2 million.

The two met while Abigail Blunt was serving as a prominent lobbyist for tobacco giant Philip Morris in the early 2000s. Their relationship drew controversy in 2002 when then-Rep. Blunt “unsuccessfully tried to insert a measure benefiting Philip Morris into the 475-page bill creating the Department of Homeland Security,” as the Washington Post reported at the time. Throwing a bone to Big Tobacco in a homeland security bill is about as bold as larding a funding bill with a rider that grants legal protection to novel GM crops.

And Blunt’s son Andy Matt, now the US auto industry’s top lobbyist, served as governor of Missouri in the mid-aughts. During his tenure there, Gov. Blunt earned the praise of the state’s powerful biotech industry, which is anchored by St. Louis-based Monsanto. He was honored with an “Award for Leadership Excellence” by the Biotechnology Industry Organization (BIO), an industry group led by Monsanto and its peers.

If Sen. Blunt plans to continue carrying Monsanto’s water in the Senate, the company will have gained the allegiance of a wily and proven political operator.