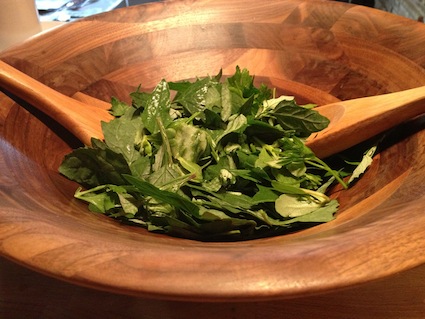 Weed it and reap: a salad of lamb's quarters, purslane, and parsley, all from Austin's Boggy Creek Farm. Tom Philpott

When I moved to a small organic farm in 2004, I quickly got hooked on weeds (note plural). First, there would be salads of chickweed—a grassy-tasting plant that popped up just after the ground thawed in spring. Next, from the marshy banks of a creek, tender, peppery watercress would sprout. Soon after, dandelion greens would proliferate, adding a bitter note to those spring weed salads. And then, along an old wood road up the forested mountainside, would come a flush of stinging nettle—we’d harvest the leaves with gloves, boil their sting away, and add them to pastas and pizzas. Finally, by high summer, my favorite weeds of all would emerge from plowed fields: a high-rising, spinach-related green called lamb’s quarters, and a low-slung, creeping plant called purslane, with its succulent, lemony leaves.

We never found much of a market for these delicacies (save for the watercress, which chefs loved). But they became staples of the farmhouse kitchen, supplements to the cultivated greens that went mainly to the farmers market and to our CSA shareholders. Now that I spend more of my time off the farm and in a city, one of the things I miss most is easy access to these flavorful wild foods.

Turns out, the void I’m feeling may be more than aesthetic. According to an op-ed by Jo Robinson in the Sunday New York Times, wild edible plants tend to be loaded with phytonutrients, “the compounds with the potential to reduce the risk of four of our modern scourges: cancer, cardiovascular disease, diabetes and dementia.”

And most cultivated crops—even celebrated healthy foods like spinach and blueberries—are pale copies of their wild progenitors in phytochemical terms, Robinson shows, adding some eye-popping infographics for emphasis. She is not talking about the small but significant decline in nutrient density since the industrialization of agriculture half a century ago, but rather a steep drop in phytonutrients that began when we “stopped foraging for wild plants some 10,000 years ago and became farmers.” Robinson writes:

Each fruit and vegetable in our stores has a unique history of nutrient loss, I’ve discovered, but there are two common themes. Throughout the ages, our farming ancestors have chosen the least bitter plants to grow in their gardens. It is now known that many of the most beneficial phytonutrients have a bitter, sour or astringent taste. Second, early farmers favored plants that were relatively low in fiber and high in sugar, starch and oil. These energy-dense plants were pleasurable to eat and provided the calories needed to fuel a strenuous lifestyle. The more palatable our fruits and vegetables became, however, the less advantageous they were for our health.

I would push back against the inverse relationship Robinson posits between palatability and nutrition. I imagine that we’ve lost a lot of flavor in the ages-old quest to breed for sweetness—and in the last 100 years or so, we’ve definitely lost still more by breeding for portability and shelf life. I would argue that flavor has declined along with nutrient density. Few people would choose modern supermarket tomatoes bred to last for weeks post-harvest over old varieties selected to taste good when eaten quickly. And weeds play a role in some of the globe’s most celebrated cuisines. I wouldn’t want to imagine Mexico’s street food without tlacoyos con quelites (lamb’s quarters) or Italy without ravioli d’ortica (stinging nettles). There’s no puritanical trade-off here. (Patience Gray’s classic Honey from a Weed demonstrates how vital weeds remain in southern European cooking, and Rebecca Katz and Mat Edelson’s recent The Longevity Kitchen offers plenty of good recipes for them).

What we can do is start seeking out varieties of fruits and vegetables that haven’t been bred to be insipidly sweet.

That caveat aside, what do we do with Robinson’s message about the loss of phytonutrients? Obviously, we can’t all suddenly become hunter-gatherers, stalking city parks for hidden bounty (though a fellow who calls himself “Wildman” will take you on a foraging tour of Manhattan’s Central Park). Nor can we all live on small organic farms surrounded by woodlands.

But what we can do is start seeking out varieties of fruits and vegetables that haven’t been bred to be insipidly sweet or high-yielding. Robinson suggests arugula as an example—it was a Mediterranean weed until very recently. Arugula is “very similar to its wild ancestor,” she notes, and “rich in cancer-fighting compounds called glucosinolates and higher in antioxidant activity than many green lettuces.” Robinson also points to herbs, which she calls “wild plants incognito.” That is, they much more closely resemble their wild antecedents than do, say, modern apples or tomatoes or corn. She adds: “We’ve long valued them for their intense flavors and aroma, which is why they’ve not been given a flavor makeover. Because we’ve left them well enough alone, their phytonutrient content has remained intact.” Robinson’s paean to herbs reminded me of my love for parsley, and how I’ve come to shower it on every meal, and even give it the starring role in a salad.

But here’s the thing about arugula and fresh herbs: They’re fantastic when you can get them recently picked, but dull when you find them in in little plastic bags shipped cross-country. And if Robinson is right that “many of the most beneficial phytonutrients have a bitter, sour or astringent taste,” I wonder if phytonutrient content doesn’t degrade along with flavor on those long trips.

That got me to thinking that one of the unsung benefits of the explosion of farmers markets and CSAs over the past 20 years is that it’s giving more and more people access to vegetables bred for things besides just sweetness, shelf life, and portability. We might not sell much in the way of lamb’s quarters at Maverick Farms (the North Carolina farm I’m involved with), but we can never grow enough of our famously spicy arugula to satisfy demand. And like many farms that sell to neighboring communities, we favor tomato varieties that balance sweetness with acidity—and may well deliver an extra jolt of phytonutrients because of it.

And small farms can deliver actual weeds, too. Just last weekend, at the Saturday farmstand of Austin’s wonderful Boggy Creek Farm, I found nestled in the back a display featuring just-picked bunches of lamb’s quarters and purslane. So I finally got my fix of weeds right here in the city—ever since, I’ve been making salads combining those two wild edibles with some parsley I also picked up at Boggy.

And the first thing I did after reading Robinson’s Sunday Times piece? I emailed it to Maverick Farms’ manager, adding that it might be high time to  try marketing our weeds again.