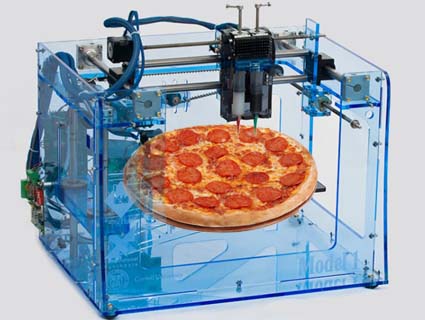 The scourge of lingering hunger amid rising obesity is notoriously complex and difficult to solve. It raises knotty questions about our shockingly unequal global economic system, about European and US farm policy, about the rise of global agrichemical/GMO firms, about global commodity markets and land grabs.

But what if we could just ignore all of that unpleasantness and hack our way to answers with novel technologies?

For example, what if we could deliver food to the globe’s hungry millions through 3-D printing? Here’s Chris Mims, writing about an engineer whose company “just got a six month, $125,000 grant from NASA to create a prototype of his universal food synthesizer”:

He sees a day when every kitchen has a 3D printer, and the earth’s 12 billion people feed themselves customized, nutritionally-appropriate meals synthesized one layer at a time, from cartridges of powder and oils they buy at the corner grocery store.

While global population is expected to top off at 9 billion, not 12 billion, I guess the idea here is to reduce humanity’s dizzying variety of foodstuffs to a set of “powder and oils,” to be combined at home by a gadget. By stripping raw ingredients of their uniqueness—”a powder is a powder,” as Mims puts it—food can be really, really cheap, and within reach of even the poorest people. This is an intensified version of the the promise of today’s industrial agriculture—produce lots and lots of a few commodities like corn and soy, which can then be processed into a variety of cheap products, from burgers to breakfast cereal. This “universal food synthesizer” represents the apotheosis of the industrial food dream.

And what about obesity? An enterprising engineer is hard at work on that, too—this time Dean Kamen, inventor of the Segway. From PopSci:

A valve gets surgically implanted in the user’s stomach, and the gadget sends a tube through it into their belly. About 20 minutes after eating, the gadget sucks out some food, and when the user squeezes a bag filled with water, the liquid gets sent back into the stomach instead. Rinse and repeat until up to 30 percent of your meal is gone.

Wait, what? PopSci digs into the Kamen’s website for details on how it works:

The aspiration process is performed about 20 minutes after the entire meal is consumed and takes 5 to 10 minutes to complete. The process is performed in the privacy of the restroom, and the food is drained directly into the toilet. Because aspiration only removes a third of the food, the body still receives the calories it needs to function. For optimal weight loss, patients should aspirate after each major meal (about 3 times per day) initially. Over time, as patients learn to eat more healthfully, they can reduce the frequency of aspirations. [Emphasis mine.]

Got that? You eat as much as you want, and then deposit a third of it directly into the toilet, undigested.

Better yet, why not combine these two innovations—3-D-printing optimum amounts of those powders and oils directly into the stomach, using Kamen’s contraption hacked to work in reverse? By the time we’re dining on home-synthesized combos of industrial goo, it’s hard to imagine overeating being a problem, anyway.