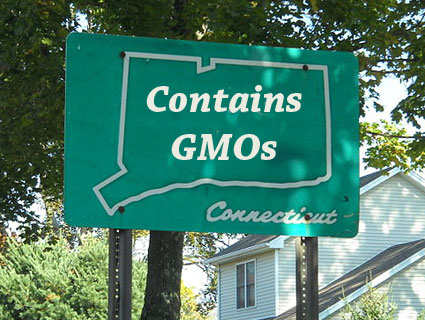 On June 3, the Connecticut legislature passed a bipartisan GMO labeling bill, making it the first state to require food manufacturers to reveal whether their products include genetically engineered ingredients. The bill passed both chambers by a landslide, and right-to-know activists have declared it a major victory. But the bill comes with a catch. Before it goes into effect, similar legislation must be adopted in at least four other states, including one that borders Connecticut, and those states must have an aggregate population of at least 20 million residents.

In other words, the Nutmeg State will continue to do nothing on GMOs until New York, Massachusetts or Rhode Island and some combination of other states also decide to take on Big Ag and Big Biotech. This trigger clause was meant to protect Connecticut businesses from being put at a competitive disadvantage and to keep the state from “going it alone,” says Paul Towers of Pesticide Action Network. Towers called it “a cautious but important step.”

With a population of 3.5 million, Connecticut doesn’t hold the same sway as a large population state like New York or California that, just by acting alone, could force GMO labeling nationwide. (Since so much of their product is sold in those states, if one of them passed a labeling bill, food manufacturers would most likely just label all of the products they sell in the US, for the sake of efficiency.) That’s why the biotech and food industries dropped $46 million last year against California’s Prop. 37, out-spending right-to-know supporters 5 to 1 and ultimately defeating the measure.

Even with Connecticut’s trigger clause, advocates are optimistic. Tara Cook-Littman, the head of GMO Free CT, said her group fought against the clause throughout the legislative session. But ultimately, she said, the group felt that the integrity of the bill wasn’t compromised by its inclusion. “The truth is we really think we have nothing to fear from the trigger clause,” Cook-Littman told Mother Jones. “We’re hoping that the clause will end up being a catalyst to encourage other states to join us.”

Twenty-five other state legislatures have considered bills on labeling genetically engineered foods in 2013. Maine is expected to vote on a bill in the next few weeks that appears to have solid bipartisan support in the state. Vermont, one of the first states to consider a GMO labeling initiative in 2011, saw an early bill die in committee and action on another bill held up by legislators last year after Monsanto threatened to sue the state. However, a new labeling bill passed Vermont’s House by a wide margin this year and is expected to move to the state Senate when they are back in session next January. (Vermont legislature has a biennium calendar.)

The next big ballot initiative on GMO labeling will be held in Washington state this November. Not only is Washington a much larger state than Connecticut, it’s also a really important state because it is a major producer of salmon and apples, two hot topics when it comes to genetic engineering. Washington is also a major producer of wheat, which is susceptible to contamination from genetically engineered seeds. This became an issue recently in neighboring Oregon when a farmer found a patch of Roundup-resistant wheat in his fields that turned out to be a Monsanto strain that was never approved for commercial planting. As a result, Japan suspended some wheat imports from the US, driving down the price of the crop.

But big biotech companies and food manufacturers argue that labeling is costly and unnecessary. They aren’t going to let labeling laws pass without a fight like the one we saw in California last year. “[Mandatory labeling] suggests there is a difference in safety or nutrition between biotech food and organic food, when there is none,” said Cathleen Enright, executive vice president of the food and agriculture section for the Council for Biotechnology Information (BIO), a major donor in the fight to kill California’s Prop. 37. “Unfortunately, for the people of Connecticut, this legislation is indeed misleading and will lead to increased consumer confusion.”

While it is unclear how much the biotech and food industries spent on their campaign against Connecticut’s measure, Cook-Littman said they made their presence known. During legislative sessions in Hartford, her group’s single lobbyist often faced off against a room full of biotech and food industry representatives. BIO and the Grocery Manufacturers of America also ran a folksy-looking website, Ctfarmtofood.org, designed to give the impression that it is a grassroots resource for local farmers. The site claimed the initiative would “drive business & science out of CT.”

Meanwhile, Sen. Barbara Boxer (D-Calif.) recently introduced a bill that would make GMO labeling a federal requirement. Along with the ballot initiative in Washington state, Towers expects this will be the main focus of the biotech and food industries’ lobbying efforts for the rest of 2013. Monsanto and biotech giants BASF, Bayer, Dow, DuPont and Syngenta (often referred to collectively as the “Big Six“) are major political donors. Bayer Ag, for example, spent $6.2 million lobbying for its pharmaceutical and biotech interests in 2012 and gave half a million dollars in campaign donations to politicians on both sides of the aisle. Towers expects the Big Six will either launch an outright blitz to stop the Boxer bill, or just chip away at the bill’s language to the point where it becomes meaningless or could end up undermining states’ efforts to enact right-to-know laws.

In the meantime, state-level, grassroots campaigns may prove to be an easier model for getting labeling laws in place, especially now that Connecticut has shown that they can be passed. “Efforts will ultimately prevail in states across the country,” Towers said. “It’s just a matter of time.”