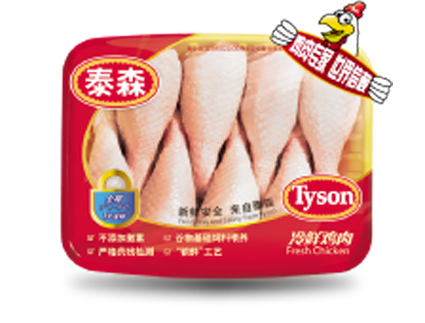 A research team led by scientists from China and Michigan State University recently found “diverse and abundant antibiotic resistance genes in Chinese swine farms,” as the title of the paper, published in the Proceedings of the National Academy of Sciences journal, put it. According to a recent analysis by a Beijing-based agribusiness consulting firm, more than half of total Chinese antibiotic consumption goes to livestock.

The trouble, of course, is that by scaling up and concentrating meat production and fueling the process with antibiotics, China’s emerging meat industrialists are merely following the US model. It is shocking that half of China’s antibiotic use takes places on farms—but here in the United States, livestock operations suck in a staggering 77 percent of total antibiotic use. It’s worth reprinting this Pew Charitable Trust chart I dropped into a post on this topic in February: 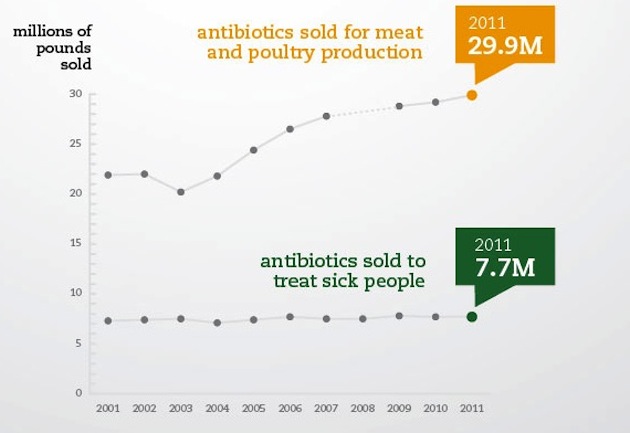 Now, it’s hard to compare the US and China numbers precisely. The ratio of farm-to-human use of antibiotics obviously tell us as much about trends in human antibiotic use as they do about farm use. As the chart above shows, US antibiotic consumption for medicinal purposes has held steady for a decade. Meanwhile, Time reported last year, per capita human antibiotic use is 10 times higher in China than in the United States, and “70 percent of inpatients at Chinese hospitals received antibiotics; the World Health Organization (WHO) recommends a maximum of 30 percent.” So one reason a lower percentage of antibiotics go to farms in China is because so damned much is being used for human medicine there.

But there’s no doubt that both nations are shoveling massive amounts of antibiotics into livestock farms—a trend that coincides with the industrialization and scaling up of those farms.

Take poultry. The following chart gives a good indication how the US poultry industry has been dramatically concentrated into fewer and fewer large operations. Note that as recently as 1950, 80 percent of US farms kept chickens—farms at that time tended to be diversified operations that mixed crops and livestock. Thereafter, the percentage of farms keeping a flock began to decline dramatically, and by 1992, less than 6 percent did. Meanwhile, of course, US chicken production was expanding dramatically, meaning those remaining chicken farms tended to be massive operations. 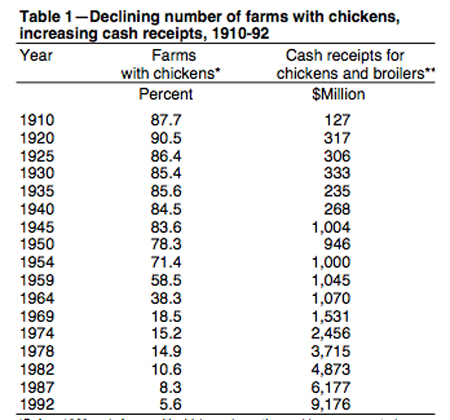 And here’s one from the Pew Environment Group’s blockbuster 2011 report “Big Chicken: Pollution and Industrial Poultry Production in America.” Note that between 1950 and 2007, the number of US farms keeping chickens dropped by 98 percent, even as the total number of chickens produced increased by a factor of 15. (A a “brolier” is a chicken grown for meat rather than eggs.)

What caused the shift in 1950? One major factor was the introduction of routine antibiotics. As USDA researchers put it in this report, scientists in the 1940s and ’50s discovered that small doses of antibiotics made animals grow faster. “Not only did antibiotics serve as growth stimulants, they had great value in disease control,” the USDA report states. “This enabled flocks to be grown in confinement.”

And this development, of course, helped give rise to the vertically integrated chicken industry we know today, dominated at the top by giant processing firms Tyson, Pilgrim’s Pride (owned by the Brazilian meat giant JBS), and Perdue. These companies tightly concentrate what was once the nationally dispersed activity of chicken production—and the pollution it gives rise to—into a few Southeastern and mid-Atlantic states.

And Chinese environmental activists should read it closely, because something similar is afoot in China today. The nation still has lots and lots of small chicken producers—as in the mid-century United States, diversified operations featuring a mix of crops and livestock. But as the USDA recently reported, China is shifting toward “larger-sized and more standardized commercial [poultry] production,” adding the following chart to illustrate. Note the slow erosion of small operations, and the explosive growth of ones featuring 100,000 or more birds.

So China appears to be where the United States was in the 1960s—early in the process of wiping out small poultry farms in favor of massive ones. Interestingly, the same US meat giant giant that spearheaded that process here, Tyson, is helping the process along in China, too. (See this classic 1994 New York Times piece on “How Tyson Became the Chicken King.”)

According to its website, Tyson operates four large-scale poultry operations in the country, including a “fully integrated poultry complex with live production operations and processing capacity.” Here’s more:

According to a May article in the US trade publication WattAgNet, Tyson hopes to leverage recent avian-flu scares in China to increase its market share there:

Tyson Foods has implemented strong biosecurity measures to help quell these [avian flu] concerns. Tyson is continuing plans to develop its own growout houses in China, rather than buying birds from outside sources…

“We believe our modern methods and processes will make our chicken the preferred product and we’ll be in a position to benefit in the long-term,” said [Tyson Foods Chief Operating Officer Jim] Lochner.

And now China is following suit. The recently proposed, still-pending sale of US pork giant Smithfield to the Chinese conglomerate Shuanghui has generated plenty of attention (including from me). But China has been steadily scaling up its own pork industry for a decade. Long before its proposed sellout to Shuanghui, Smithfield had a relationship with another sprawling Chinese food-processing company, Cofco. Back in 2008, Cofco bought 5 percent of Smithfield’s shares, with the explicit goal goal of bringing US-style hog production techniques to China. “We hope we will learn from Smithfield its technology and management advantages in the production chain from livestock breeding to quarantine to consumer table,” a Cofco spokesperson told Reuters at the time.

Meanwhile, Chinese pork farming is changing rapidly. As recently as 2001, an analysis by the Dutch bank Rabobank found about three-quarters of China’s hogs came from small backyard operations. By 2010, that figure had fallen by half—and the percentage of its hog supply emerging from factory-like facilities tripled, reaching 15 percent.

All of which brings us back to that study by Chinese and Michigan State University researchers—the one that found “diverse and abundant antibiotic resistance genes in Chinese swine farms.” Can that be any surprise, given that China is transforming its meat production after the US model?