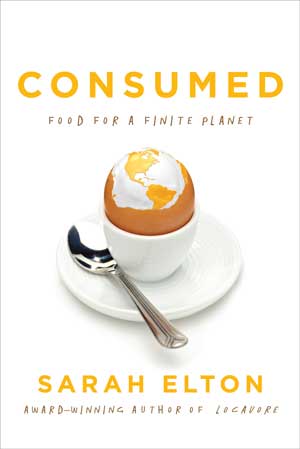 Courtesy of The University of Chicago Press

By now, it’s clear that climate change could destroy the food system as we know it. Add to that scary fact the impending weight of an expected three billion more hungry mouths over the next forty years, and we have a lot to worry about. So how in the world are we going to feed ourselves?

That’s the problem that Canadian journalist Sarah Elton tackles in her new book, Consumed: Food for a Finite Planet. The pitfall of our modern food system, Elton writes, is that it prioritizes maximizing output—while ignoring the ecology that healthy crops and livestock depend on. Farmers today produce 145 percent more food than they did just a few decades ago, but agriculture is also responsible for more than a third of greenhouse gases worldwide. It also drains our planet of water and pumps chemicals from pesticides, herbicides, and fertilizer into our land.

But perhaps the biggest flaw that Elton identifies in modern agriculture is its reliance on the practice of monocropping, or growing a single species of plant over a hundreds or thousands of acres. This method has made the food system incredibly efficient, but Elton argues that it also means we’ve put all our genetic eggs in one basket at exactly the time when we should be bolstering the natural genetic diversity of our food system and working it to our advantage.

Elton uses corn farming in Nepal as a case study on how monocropping can backfire. Until the 1970’s, small farmers there grew hundreds of different kinds of corn. Then agribusiness companies sold them hybrid varieties, and the old tradition of saving and trading the many local varieties disappeared. The new seeds—and the pesticides and fertilizer they required—did yield more corn, but in 2008, the corn crop simply failed to produce, and thousands of farmers, who were already heavily indebted to the seed companies, saw their incomes disappear completely. Though no one is certain exactly why the crop failed, it was clear to the farmers that relying on just a few imported varieties of seeds was a risk they could not afford to take.

A changing climate favors plants that can adapt quickly by drawing from a wealth of genetic material.

As a point of contrast, Elton describes an experiment in Maryland that showed how genetic diversity allows plants to thrive in changing conditions. In the spring of 2002, Lewis Ziska, a scientist for the US Department of Agriculture’s Crop Systems and Global Change lab, isolated a few plots of land in the Baltimore area, one where the climate conditions were average for the region today, and two more where they approximated the forecast around 2030 and 2050. Each plot had the same topsoil and was planted with several common species of weeds.

After five years, Ziska observed that the samples of ragweed and lamb’s quarters that he planted on the warmest plot—down by the steamy, smoggy (and therefore carbon-saturated) Baltimore waterfront—grew up to twice the size of their counterparts further inland, where the weather was typical of current conditions. The reason, Ziska hypothesized, was linked directly to the weeds’ inherent genetic wealth. Unlike monocrops, weed clusters like the ones Ziska observed can contain multiple variations of the same species, allowing them to change and adapt over successive generations. For Ziska, the implication was obvious: A changing climate favors plants that can adapt quickly by drawing from a wealth of genetic material.

Elton goes on to argue that modern agriculture focuses too much on particular crops, and not enough on the ecosystems around them. Elton describes how in China, rice paddies not only produce rice, they also support fish, an important source of protein for people. “[I]f one part of the ecosystem doesn’t do well one year, another is sure to flourish,” Elton writes. But add some herbicides to the mix and the whole system falls apart. As researchers at the Yunnan Agricultural University in China discovered, when hybrid seeds are introduced to rice paddies, the chemicals that the new seeds require kill off the natural predators of a hazardous group of insects called planthoppers, which then multiply wildly before devouring the rice crop. When the rice is gone, the fish suffer, too.

By concentrating on a few varieties of mass-produced crops, we have done away with many of the alternatives that could carry us through the lean years to come. As Ziska’s Baltimore experiment demonstrated, both plants and entire ecosystems need genetic diversity to adapt to a hotter, carbon-rich future. If we eliminate that diversity now, Elton writes, we may pay the price later.