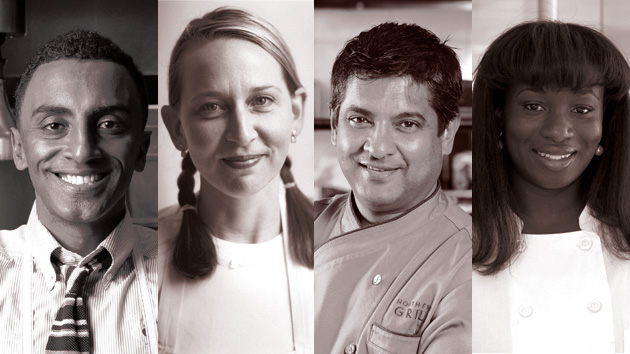 What does it take to break the mould in a prestigious, white-male-dominated industry? I tackled that question in a recent piece on how women chefs, who, despite impressive advances in recent years, get short shrift when it comes to big-name awards and invitations to high-minded culinary confabs. But restaurants’ diversity problem is bigger than just a gender imbalance. More then two centuries after the invention of the fine-dining restaurant in the wake of the French Revolution, chefly prestige remains largely—but not completely—the domain of not just males, but white males. What gives?

On a frigid evening in Harlem last week, I got the opportunity to put the question directly to four mould-breakers in a public conversation at Ginny’s Supper Club, the cozy, red-tinted, speakeasy-like saloon in the cellar of Red Rooster, chef Marcus Samuelsson’s neo-soul-food establishment on Lenox just north of 125th Street. The evening started with wine and snacks, which included house-made charcuterie, cheese, and cornbread madeleines—the latter, I thought, a clever mashup of French and US traditions, a Proustian nod to our most memory-drenched and historically fraught region, the South. My own melancholic musings aside, the room buzzed and glowed in the hour or so leading up to the panel—a diverse crowd of 150 or so chatted and circulated, young, old, and in between, culinary students, chefs, writers, and food lovers of all stripes, from the neighborhood and other parts of Manhattan, from Brooklyn, and even, I hear, from Chicago.

Eventually, we took to the stage: to my right Marcus himself; then Gabrielle Hamilton, chef/proprietor of the highly influential East Village spot Prune; then Charlene Johnson-Hadley, a daughter of Brooklyn’s Afro-Caribbean diaspora who worked her way up through Samuelsson’s Red Rooster kitchen and is now executive chef at his Lincoln Center outpost American Table Bar and Cafe; and finally Floyd Cardoz, chef at North End Grill in Battery Park City, who brought the cooking of his native India into the glamor of a buzzy Manhattan restaurant with the late and much-lamented Tabla.

Unfortunately, our conversation wasn’t recorded. But Eater delivered a “10 Best Quotes” piece, Serious Eats‘ Jacqueline Raposo has a very thoughtful post on the event, also with several quotes, and the blogger Ronda Lee offered worthy commentary on the event.

My favorite parts of the discussion were: 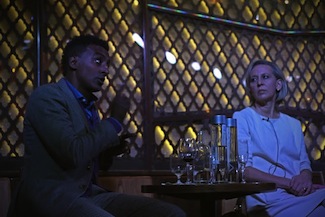 1) Marcus—who was born in Ethiopia and raised in Sweden—talking about coming up as an ambitious young cook in France, where the message he got was “ce n’est pas possible,” i.e., it’s not possible for a black man to command his own kitchen. His outsider status served as a spur, he said: With the conventional path to chefdom blocked to him, he had to forge his own, which included moving to the melting pot of New York and grabbing the reins of the Swedish restaurant Aquavit.

2) Gabrielle talking about how she found herself in the restaurant world not out of a passion for cooking, but rather out of the need to support herself at a very young age—and about how being a woman in restaurant kitchens, when she came up in the 1980s, meant having to forge an identity, a way to fit in, since there was no preexisting identity to fall into. Here’s her money quote, which I’m cribbing from Eater because I didn’t take notes:

Yes, there were horrible white men in the kitchens and the hardest part of that is the contortions you’d put yourself through to figure out your place in that kitchen. Should I be a chain-smoking dirt-talking motherfucker who can crank it fucking out? Or should I be kind of a dainty female with lipstick and be like, ‘Can you help me with this stock pot because I just can’t?’ Frankly it’s a freaking second job on top of what you’re already doing. One of the hardest parts is trying to make a viable self that you can live with and and go home and respect at the end of the day.

“Should I be a chain-smoking dirt-talking motherfucker who can crank it fucking out? Or should I be kind of a dainty female with lipstick and be like ‘Can you help me with this stock pot because I just can’t?'”

3) Charlene talking about how she was drawn to cooking as a child through her grandmother’s Jamaican-inflected kitchen, and how, while in college in the 1990s, she realized she wanted to make a career of cooking, which sent her to culinary school and her current path. It struck me that unlike Marcus and Gabrielle, who came up in the 1980s, Charlene could envision for herself a conventional path to success: go to chef’s school, get a job. Here’s Charlene’s take on being a woman of color in the professional kitchen (quote from Raposo’s piece): “I just think you need to get past yourself and not think of yourself as ‘the different one.’ That shouldn’t be your focus. Your focus should be following your ambition, making sure you are doing what it is you want to do, and making yourself an asset to wherever you are.”

4) Floyd on aspiring to cook professionally while growing up middle class in India—and the culture shock it gave his parents, who hoped he would be a doctor. Until pretty recently, the professional kitchen was a place middle class people aspired to flee. Now, with the rise of the celebrity chef, it has emerged as a site of aspiration. Hamilton touched on that topic, too, when she mentioned that suddenly, “40-year-old white males” are applying to work in her kitchen. She went on (quote from Raposo):

Now we have the whole new problem of, “I used to be an architect” and “I have a trust fund” and “I have so much more money and power than you’re ever going to have in this world.” And you have to go up to that guy and say, “You know, your sauce is a little salty.”

As Ronda Lee put it in her blog post, “gender and race [in the professional kitchen] is a lot to cover in a two-hour discussion.” And our panel in Harlem last week barely scratched the surface. I learned again what I learned when writing my piece on gender: This is a fascinating and complex conversation, one that people working to make the restaurant world more inclusive are eager to have. There’s so much we didn’t get to—for example, what about the role of Mexican immigrants, who are the lifeblood of kitchen lines from Los Angeles to New York? We at Mother Jones plan to continue exploring it. Stay tuned.