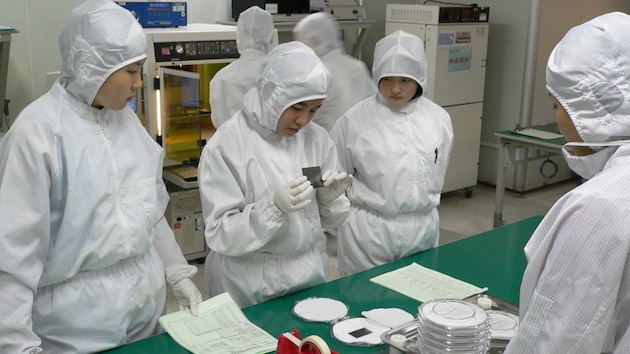 On Wednesday, I wrote about how nanotechnology—which involves microscopic particles of common substances—is rapidly pervading the food supply, despite health concerns raised by the Food and Drug Administration. But food is just one of the ways people interact with this ubiquitous and little-discussed technology. Another one is the workplace.

Nanoparticles are known to be used used in more than 1,600 consumer products, from athletic socks and bed sheets to toothpaste. Globally, the nanotech industry is worth about $20 billion per year. That’s a lot of superfine particles that have to be manufactured, delivered, and added to the various end products by workers.

I asked W. Shane Journeay, a medical researcher at the University of Toronto who studies the health effects of nanotechnology, how many people interact with nanoparticles at work. He told me, citing National Science Foundation estimates, that nanotech companies will employ 6 million people globally by 2020, about one-third of them in the United States.

But those numbers, which apply to companies that specialize in producing nanoparticles, severely undercount the actual number of potentially exposed workers, he says. True, not every employee of a nanotech manufacturer come into contact with nanotech material. But workers in other industries likely more than make up the difference. Most consumer goods companies in the Fortune 500 are using nanotechnology, he says. “If not, they’re behind the times.” So, for instance, a hardware company that adds nanoparticles to paint will expose some of its workers to the stuff, but they aren’t counted in the industry estimates. Often, Journeay says, workers who come into contact with nanoparticles on the job do so without knowing it.

The government has only created maximum exposure guidelines for two nano products—and those are voluntary.

According to Journeay, there are currently no regulations that outline safety measures workers should take when working with nanoparticles. Only two nano products—titanium dioxide (used widely in food) and single-walled carbon nanotubes—have inspired the National Institute for Occupational Safety and Health (NIOSH) to create maximum-exposure guidelines, he says. And those are voluntary.

At the same time, Journeay and two Harvard medical researchers have established that workers run the real risk of getting sick from on-the-job exposure. They recently published a case report  in the American Journal of Industrial Medicine about a 26-year-old chemical industry worker who developed “throat irritation, nasal congestion, ‘post nasal drip,’ facial flushing, and new skin reactions to her earrings and belt buckle” after unknowingly working with nickel nanoparticles “in a setting without any special respiratory protection or control measures.” Later, allergy tests linked her reaction directly to the nano-nickel exposure, prompting the company to “make plans for better control measures” for that specific product, Journeay and his colleagues wrote.

The worker’s exposure to nickel nanoparticles amounted to “just a few grams,” Journeay told me. This suggests that very small amounts can cause significant symptoms. The fact that she didn’t know she was working with nanoparticles is likely a common scenario for workers whose employer does not specifically make nano products, he said. If so, untold numbers of workers across a wide swath of industries could be developing allergies or other health problems related to nano exposure, and have no idea why. Moreover, nanoparticles are so tiny that they may be able to penetrate protective gear. Journeay told me that it’s unclear whether taking such precautions would have prevented the sickened worker from harm. “This is just one case, but are there more?” Journeay said. “Quite likely.”

The way to find out for sure would be to conduct epidemiological studies—to look closely at nano-exposed workers and compare their health metrics over time to nonexposed workers. But such studies are impossible now, since so little information is available on who, exactly, is using the technology. For the time being, we’re essentially running an uncontrolled experiment on an unknowable numbers of workers.