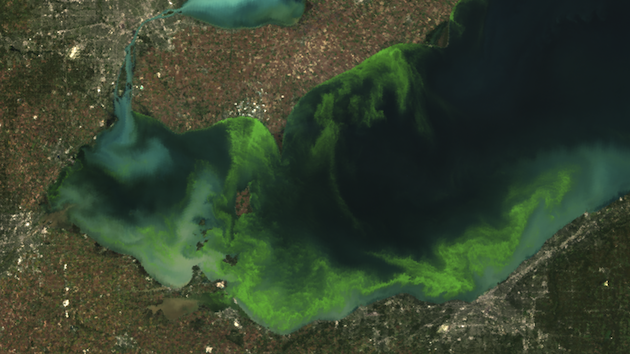 Last weekend, Toledo’s 400,000 residents were sent scrambling for bottled water because the stuff from the tap had gone toxic—so toxic that city officials warned people against bathing their children or washing their dishes in it. The likely cause: a toxic blue-green algae bloom that floated over the city’s municipal water intake in Lake Erie. On Monday morning, the city called off the don’t-drink-the-water warning, claiming that levels of the contaminant in the water had fallen back to safe levels. Is their nightmare over?

One expert said he could “almost guarantee” that the conditions that caused the crisis, i.e., a toxic bloom floating over the intake, would recur this summer.

I put the question to Jeffrey Reutter, director of the Stone Laboratory at Ohio State University and a researcher who monitors Lake Erie’s annual algae blooms. He said he could “almost guarantee” that the conditions that caused the crisis, i.e., a toxic bloom floating over the intake, would recur this summer. But it’s “pretty unlikely” that toxins will make it into the city’s drinking water. That’s because after the weekend’s fiasco, a whole crew of public agencies, from the Ohio Environmental Protection Agency to the US Environmental Protection Agency to the City of Toledo, have been scrambling to implement new procedures to keep the toxins out. “I think they have a pretty good plan in place,” he said. But “you can’t guarantee [there won’t be a recurrence] because you can’t predict “how bad the concentration of the toxins going into the plant [from the lake] is going to be.”

Reutter added that he “anticipated” that the new system for protecting Toledo’s drinking water would be more expensive than the current one. Back in January, local paper the Blade reported that Toledo “has spent $3 million a year battling algae toxins in recent years, [and] spent $4 million in 2013.”

And those hard realities highlight a hard fact about our way of farming: It manages to displace the costs of dealing with its messes onto people who don’t directly benefit from it. The ties between Big Ag and Toledo’s rough weekend are easy to tease out. “The Maumee River drains more than four million acres of agricultural land and dumps it into Lake Erie at the Port of Toledo,” the Wall Street Journal reports. More than 80 percent of the Maumeee River watershed is devoted to agriculture, mainly the corn-soy duopoly that carpets the Midwest. Fertilizer and manure runoff from the region’s farms feed blue-green algae blooms in the southwest corner of Lake Erie, from which Toledo draws its water.

And those blooms don’t just tie up oxygen in water and push out aquatic life, creating dead zones. They also often contain the compound that triggered the water scare: microcystin, a toxin that can cause nausea, vomiting, diarrhea, severe headaches, fever, and even liver damage. Apparently, a particularly noxious chunk of algae floated over Toledo’s water intake equipment, causing the microcystin spike.

Back in early July, the National Oceanic and Atmospheric Administration (NOAA) and the University of Michigan delivered their forecast for this year’s bloom on the western part of Erie: It would likely be much smaller than it was in 2011, when a record 40,000 metric tons of cyanobacteria (blue-green algae) accumulated, but likely much higher than the past decade’s average of 14,000 metric tons—the researchers forecast a 2014 bloom weighing in at 22,000 metric tons. The blooms don’t peak until September, which is why Reutter is convinced that the condition that created last weekend’s troubles will likely re-emerge.

Here’s a chart from the report:

The bottom half of that chart tracks the flow of phosphorus, the component of fertilizer and manure that triggers freshwater algae blooms, into Lake Erie. Of course, farm runoff isn’t the only way phosphorus makes its way into the lake. Municipal sewage and industrial waste play a role, too. But reforms imposed by the Clean Water Act in 1972 minimized those sources, pulling Lake Erie from the brink of death.

The below chart, taken from a 2013 Ohio Lake Erie Phosphorus Task Force report, shows the sources of Lake Erie phosphorus over the past several decades. Under pressure from the Clean Water Act, pollution from “point” sources like wastewater treatment plants and factories have been severely curtailed. But the CWA doesn’t regulate “non-point” sources, mainly agriculture. “Harmful algal blooms were common in western Lake Erie between the 1960s and 1980s,” NOAA notes. “After a lapse of nearly 20 years, blooms have been steadily increasing over the past decade.” 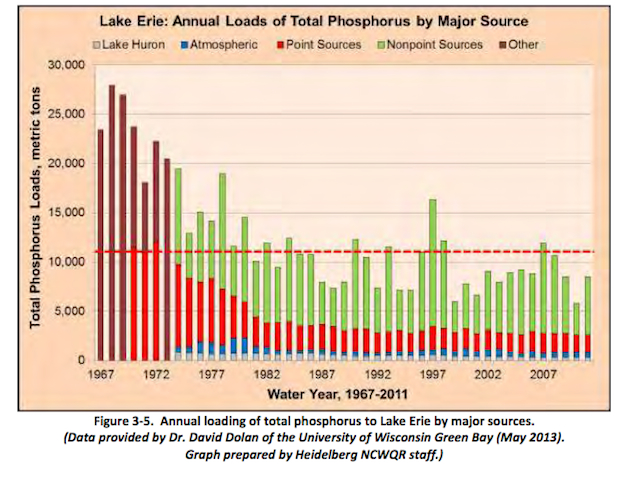 Climate change plays a role, too—both because longer, warmer summers give algae more time to build up, and because warmer mean temperatures are also likely driving a steep increase of heavy rains in the upper Midwest, which force more phosphorus off farm fields and into waterways. Changes in the way farmers apply fertilizers are also apparently making phosphorus more mobile as this 2012 article by Jessica Marshal for the Food and Environment Reporting Network shows.

Of course, western Ohio isn’t the only Corn Belt region encountering toxic algae. “A reported chemical spill on the Des Moines River above Saylorville Lake Wednesday turned out to be a blue-green algae bloom,” the Iowa Department of Natural Resources reported in late July. More recently, the Army Corps of Engineers issued an advisory against swimming in two beaches of Lake Red Rock, Iowa’s largest lake, “in response to the presence of a significant blue-green algae bloom which has the potential to impact the health of humans and their pets.”

And phosphorus isn’t the only fertilizer component that feeds algae blooms. Nitrogen does to saltwater what phosphorus does to freshwater—and every year, the Mississippi River carries titanic amounts of nitrogen into the Gulf of Mexico, more than half of which comes from corn and soy farms. These flows feed a vast algae bloom that creates an aquatic dead zone that can reach the size of New Jersey—blotting out a wild, abundant source of high-quality seafood, in order to grow crops that mainly go to feed livestock, cars, industrial-cooking fats, and sweeteners. This year’s dead zone clocks in at 5,008 square miles—”roughly the size of Connecticut and…three times larger than the 2015 goal established by a task force specifically created to address the problem,” the Mississippi River Collaborative announced Monday.

Such sacrifices are what economists call “externalities”—the costs of doing business that don’t show up on the bottom lines of farmers, or the companies that buy their goods for animal feed and ethanol, or the firms that sell them the seeds, pesticides, and fertilizers that facilitate mass monocropped plantings.

Residents of places like Toledo are left holding the bag. Many people there are questioning the safety of their water supply and turning to pricey bottled water instead, USA Today reports. And now, the city’s taxpayers (or some public entity) will likely be paying more than ever to keep algae toxins out of the tap water.