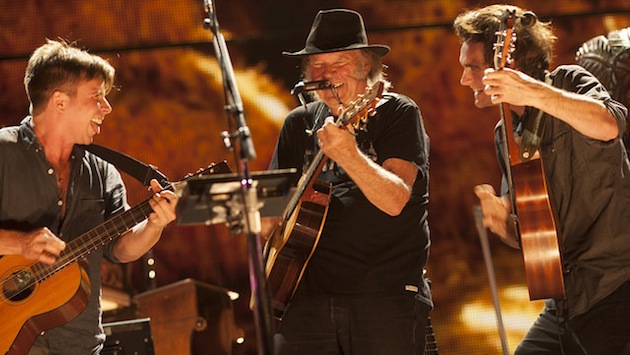 Farm Aid, the annual, roving concert anchored by Willie Nelson and Neil Young, launched in 1985, amid the steepest US farm crisis since the Great Depression. Twenty-nine years later, is it still relevant? Last week, on a muggy day in Raleigh, NC, I got the chance to investigate.

The event, at the outdoor Walnut Creek Amphitheater, on the outskirts of town, started with the most star-studded press conference I’ve ever attended. Arrayed in chairs on the stage before us were the headliners: Nelson, wizened face framed by a black baseball cap and those eternal red, frizzy ponytails; Young, somber in bushy sideburns, a black wide-brimmed fedora, and black t-shirt emblazoned with the word “Earth” in ominously faded white lettering; John “Cougar” Mellencamp, appropriately ’80s in a white t-shirt under black blazer, graying hair done up in what Vanity Fair once called that “rooster comb of a pompadour”; and Dave Matthews, looking like a concerned dad with his trim beard and blue polo shirt, 100 times more conventional-looking than his much-older peers on stage.

Sure, Farm Aid preaches to the choir, but also gets beyond it in ways that most gatherings don’t.

Instead of breaking into song, this quartet of platinum-selling crooners delivered earnest pleas against the abuses of corporate-dominated agriculture. Young spoke longest—to the whoops of the crowd, he denounced the Citizens United decision and tied it directly to industrial agriculture, and suggested that corporate power shapes federal farm policy. “The corporations are the villains,” Young told the crowd, and painted a picture of family farms writhing under the heel of massive seed and input companies.

And rather than hog the attention of the assembled, they ceded the spotlight to several North Carolina farmers and farm advocates who joined them up there. And these weren’t new-wave farmers singing the delights of consuming local, organic food.

Kay Doby, speaking in a Piedmont NC twang as no-nonsense as her t-shirt and jeans, spoke of the debt spiral faced by poultry farmers who work under contract with massive meat processors—companies that provide birds and feed, but require farmers to constantly invest in upgrading their facilities. Poultry giant Pilgrim’s Pride revoked her contract during the economic downturn, she says, leaving her with huge, suddenly useless investments in chicken houses. “I think being cut off had a lot to do with [how] I spoke out against the practices that were being used against the growers,” she said. But she survived by converting her chicken houses into barns for pasture-raised meat goats. “That kept me on the farm,” she said.

Later we heard from Dorothy Barker, who runs Olusanya Farm in Oxford, NC with her husband Phillip Barker. By the 1980s, after decades of being denied fair access to loans both by private banks and the USDA, the Barkers found themselves running one of the state’s last two remaining black-owned dairy farms, Barker recounted in forceful, measured, and blunt tones. “It didn’t take long for me to realize they were pissing in my face—it wasn’t raining,” she said. Ever since, the Barker’s have been organizing against this ag-based version of racist redlining, as well as developing infrastructure and building markets for black farmers in a region still marked by the historical legacies of slavery and Jim Crow.

After watching these bracing displays of real talk on the state of farming, I spent much of that long day in Raleigh thinking of ways in which Farm Aid is different from most other farming-and-food conferences I have attended over the years. Sure, Farm Aid preaches to the choir, but also gets beyond it in ways that most gatherings don’t. 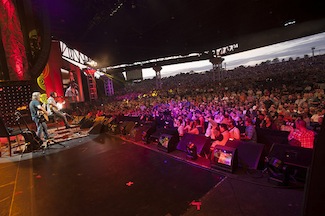 Quite a crowd for a farm fundraiser Photo: Paul Natkin/Photo Reserve, Inc.

For one, people come out for superstar musicians. I’ve been to some of the largest organic-farming confabs in the country—California’s EcoFarm, the Northwest’s Tilth conferece. I attended Slow Food Nation in San Francisco in 2008—a spectacular event that drew some 85,000, but dispersed over three days and in venues across the city. That same year, I and 8,000 others attended Terra Madre, the biannual global food-activism event put on in Turin, Italy, by Slow Food International.

But I’ve never seen attendance like Farm Aid’s. By the time the music started in the early afternoon—the lineup included the above-named headliners, plus Jack White, the Preservation Hall Jazz Band, Gary Clark, Jr. and eight other acts­—the venue was packed. It was a brutally humid day that constantly threatened rain, and the arena’s cover only extended to the numbered seats, sheltering a small fraction of its total capacity. Yet that didn’t daunt the crowd of 20,000, most of whom sat unsheltered, on blankets on the up-sloping lawn. In the vast crowd, I saw farmers, activists, the requisite hippy-dancing youth, and families.

“Farm Aid is a whirlwind that blows through town, and we all hope to catch some of it in our sails,” Chris Rumbley, a 30-something farmer who runs Raleigh City Farms told me. “It was good to see a food organizing platform that emphasizes farmers, giving us the spotlight for a minute.”

It also delivers more than just rhetoric. Those 20,000 revelers paid $49 a pop for a place on the lawn, and as much as $175 for a seat near the stage. The musicians forsake a cut, and the bulk of the haul is distributed by Farm Aid to groups across the country that work directly to keep struggling farmers on their land. Since 1985, Farm Aid has delivered more than $42 million to farm advocacy groups.

And while the most extreme pressures of the 1980s farm crisis have receded, US farmers—especially ones in the middle, too big to sell directly to consumers through channels like farmers markets, but too small to hold their own with large agribusiness—remain under steady pressure. The USDA’s latest ag census, released in May, looked at US farm numbers by size, and changes between 2007 and 2012. The only category that saw growth was farms 2,000 acres and bigger, which inched ahead by 2 percent or so over the period. Farms between 100 and 500 acres saw the steepest losses—there were about 5 percent fewer of them in 2012 than there had been five years earlier. This ongoing hemorrhage of mid-sized farms is part of a decades-long hollowing out of rural America—the very problem Farm Aid exists to address.

As I took in Jack White’s searing, guitar-driven set, among 20,000 others rapt at the former White Stripes frontman’s virtuosity, I became fired up  about all these issues in a way I hadn’t been for years.