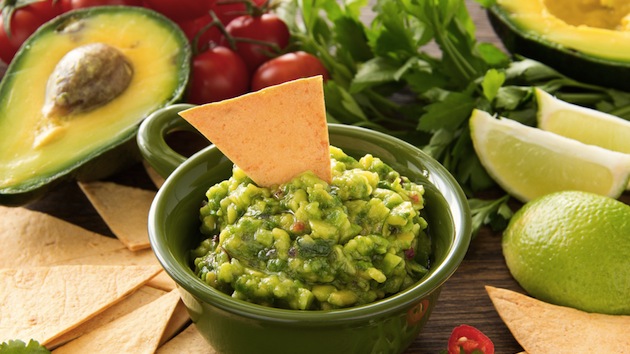 We’ve heard a lot about how the boom in almond and other nut production is straining California’s dwindling water supplies amid the state’s worst-ever drought. But what about the avocado, another trendy commodity that grows on trees and delivers all-the-rage healthy fats?

US consumers certainly love this unctuous tropical fruit. According to the US Department of Agriculture, avocado production per capita jumped from 1.1 pounds annually in 1999 to 4.5 pounds in 2011.

Avocados don’t require nearly as much water per pound as almonds. But they do require significantly more than other kinds of produce, as my colleague Julia Lurie shows in this chart:

(Note that the figures in this chart, and the one later in this post, include only blue water—which comes from rivers, lakes, streams, and aquifers—and not rainfall or recycled water.)

And as in the case of almonds and so many other crops, California dominates US production, accounting for about 90 percent of the US avocado harvest. Nearly all of it takes place in Southern California, in a five-county region that straddles the coast from San Luis Obispo to San Diego.

Like the rest of the state, the southern coastal region is locked in a drought, and largely cut off from the flow of surface water from the state’s big irrigation projects. The result has been strife in the avocado groves—sky-high water costs and a reliance on water pumped from underground aquifers.

But overall, California’s avocado farms have a relatively light water impact. Unlike almonds and pistachios, whose acreage has expanded dramatically in recent years, land devoted to avocados has actually shrunk, from a high of 76,000 acres in 1987 to fewer than 60,000 acres in 2012 (although production has held steady, because yield increases have offset the loss of acres). Also unlike the state’s nut growers, California’s avocado farmers aren’t taking advantage of a boom in demand from Asia. According to the USDA, US avocado exports are so small they’re “negligible.”

Also, avocados are a perishable, seasonal product, and the California season peaks from May through August—meaning that for the rest of the year, we rely on Mexico, Chile, and Peru to satisfy our guacamole habit. All told, the USDA reports, about 70 percent of the avocados we consume are imported.

And so most of the water impact from our growing appetite for avocados lands on other places. And as Eilis O’Neill recently reported in Civil Eats, satisfying our demand for off-season avocados is causing trouble in another drought-stricken region, Chile’s Central Valley—which, like California’s, lies between a snowcapped interior mountain range and a coastal mountain range.

In part because of demand from the United States, avocado farmers in Chile have used so much water that some towns’ wells have run dry.

This valley is the epicenter of Chile’s fruit-and-veg export behemoth that began in the 1980s. As this US Department of Agriculture report states, Chile’s Southern Hemisphere location gives it a “counter-seasonal production schedule with the United States”—that is, Chile’s summer starts around the time that ours ends. The rapid rise of Chilean produce into the US market is a big reason US consumers can expect bountiful produce aisles year-round—it “extended the availability of certain fruits in the market without direct competition with domestic production, and gave US consumers fruit choices beyond the traditional domestic winter fruits of citrus, apples, and pears,” the USDA notes. Chile now supplies a fifth of US fruit, the USDA adds.

And just as in California, climate change and drought have meant less surface water flowing from mountain ranges to irrigate crops—and a shift to pumping water from underground aquifers. As a result, producers have “used so much of the region’s waters that small farmers with shallow wells—and some nearby towns—are left with no water,” O’Neill writes, echoing reports of waterless towns in California’s Central Valley.

Like our Golden State, Chile takes a laissez-faire approach to groundwater regulation, O’Neill reports—a legacy of the reign of General Augusto Pinochet, a free-market zealot who came to power in a US-backed coup in 1973 and remained dictator until 1990.

And large, export-minded farm operations have the wherewithal to drill larger and deeper wells, squeezing out small farms and nearby communities, O’Neill reports. Meanwhile, the profits from Chile’s farm export boom remains pretty concentrated in the hands of large landowners.

Chile’s avocado harvest starts in runs from August to March—making it a prime supplier during the football season guacamole blitz.

O’Neill’s piece gives us something to think about as we plunge chips into that delicious dip. “When you eat an avocado that comes from [a large producer in] Chile, think about the fact that the water used to produce it is water that homes in the country’s most humble communities now lack,” water activist Rodrigo Mundaca tells her.