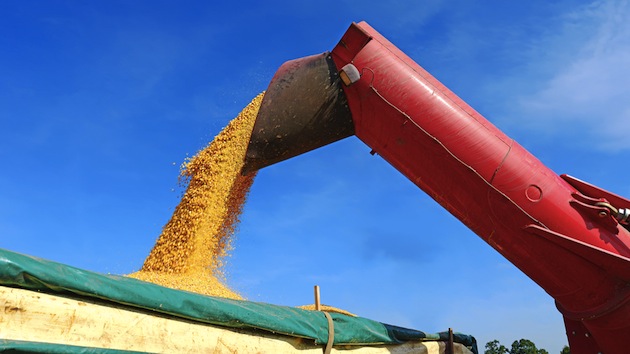 Think you have it tough at work? Consider the plight of the Midwest’s corn and soybean farmers. They churn out the basic raw materials of our food system: the stuff that gets turned into animal feed, sweetener, cooking fat, and even a substantial amount of our car fuel. What do they get for their trouble? According to a stunning analysis (PDF) by Iowa State ag economist Chad Hart, crop prices have fallen so low (a bumper crop has driven down corn prices to their lowest level since 2006), and input costs (think seeds, fertilizers, pesticides) have gotten so high, that they’re losing $225 per acre of corn and $100 per acre of soybeans.  So if you’re an Iowa farmer with a 2,000-acre farm, and you planted it half and half in these two dominant crops, you stand to lose $325,000 on this year’s harvest.

Over on Big Picture Agriculture—the excellent blog that alerted me to Hart’s assessment—Kay McDonald wonders: “Is organic corn the way to go next year?” She points out organic corn receives a large premium in the market, and key input costs—seeds, fertilizers, and insecticides—are much lower, making the economics better.

Another possibility is one I’ve been banging on about for years: why not take some of the Midwest’s vast stock of farmland—say, 10 percent?—and devote it to vegetable and fruit production? And take another slice of it and bring it back to perennial grass for pasture-based beef and pork production? Both vegetables and pastured meat deliver much more income pre acre than commodity corn and soybeans, once the systems are up and running and the infrastructure in place. And considering how much of our produce comes from drought-stricken California, that would likely be a wise move from a food security standpoint.

Alas, none of this is likely to happen, at least not anytime soon. That’s because crop subsidies, enshrined by the farm bill signed in February, will likely wipe out much of the huge gap between farmers’ costs and what the market gives them. According to Bloomberg, taxpayers are set to pay “billions of dollars more to subsidize farmers than anticipated just months ago,” before crop prices plunged.

I don’t begrudge federal support for farming. As I argued in a post last year, large-scale commodity farming is a vicious business—farmers are caught in a vice between a small handful of buyers (Archers Daniels Midland, Cargill, Bunge) that are always looking to drive crop prices down, and a small handful of input suppliers (Monsanto, DuPont Pioneer, Syngenta, etc) always looking to push the price of seeds, fertilizers, and pesticides up. It’s no wonder, as Iowa State’s Hart has shown, that the “long run profitability” of such farming is “zero.”

But as it’s structured now, the subsidy system keeps farmers chugging along on the corn-soy treadmill. Meanwhile, transitioning to organic ag and diversifying crops to include vegetables and pastured meat would also require much more hands-on labor and a new set of skills for Midwestern farmers, who have been operating in a corn-soy-chemical system for decades. It would also require the rebuilding of infrastructure—small-scale slaughterhouses, canneries, cold storage, etc.—that were dismantled as corn and soy came to dominance. Supporting such a transition, and not propping up an unhealthy food system suffused with cheap corn and soy, seems like a good use of the billions of federal dollars that are about to be spent.