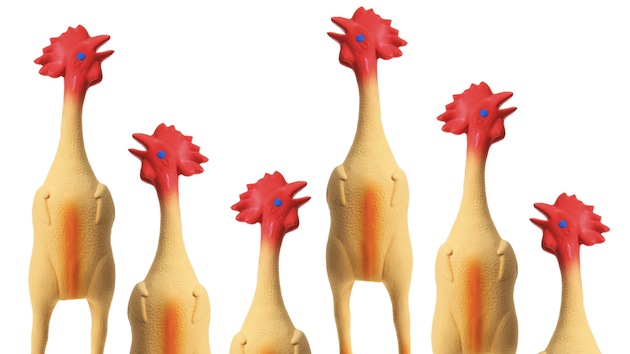 Two years ago in the New York Times Magazine, the great food writer Mark Bittman made the case for fake meat. “Isn’t it preferable,” he asked, “to eat plant products mixed with water that have been put through a thingamajiggy that spews out meatlike stuff, instead of eating those same plant products put into a chicken that does its biomechanical thing for the six weeks of its miserable existence, only to have its throat cut in the service of yielding barely distinguishable meat?”

The argument is powerful. Factory-farmed meat doesn’t taste like much, yet generates all manner of wreckage, from antibiotic-resistant pathogens to fouled water and air to horrific working conditions and what amounts to systematized animal torture. Indeed, why not just eat some soybeans tarted up to look and taste like meat instead?

Well, the falafel revolution I tried to foment has not materialized.

At the time I scoffed at Bittman’s alternative. I deplored the ingredients list of the chicken substitute he had profiled—soy protein isolate, pea protein, carrot fiber, etc.—as an example of what Michael Pollan has called “nutritionism”: fracturing perfectly excellent whole foods like peas and carrots into components and reassembling them into something less nutritionally valuable. “You’re almost certainly better off eating carrots and edamame—young soybeans that actually can be eaten by people—than you are ingesting mashed-up isolated components of them,” I sniffed, and then went on to suggest that everyone interested in eating less meat turn to tried-and-true, minimally processed high-protein vegetarian foodstuffs instead.

Well, the falafel revolution I tried to foment has not materialized. And now, another piece by an esteemed food writer—Rowan Jacobson, author of American Terroir: Savoring the Flavors of Our Woods, Waters, and Fields—has caused me to rethink my position.

In a much-shared article in Outside, Jacobson profiles a company called Beyond Meat, which plans to debut a product called Beast Burger later this month. Where other companies, including Beyond Meat, have made substances that closely enough resemble chicken, Jacobson reports, the Beast Burger will represent the first respectable facsimile of beef.

It wasn’t some flavor or texture breakthrough that prompted my reconsideration. Despite the lofty promise in the article’s subtitle (“the juicy flavor and texture of the real thing”), what Jacobson actually tastes when he bites into a Beast Burger doesn’t exactly pique the appetite—unless you have a thing for ’70s-era school-cafeteria cuisine:

Is it as delicious as a quarter-pound of well-marbled, inch-thick USDA Choice? Hell no. Good ground beef, lovingly grilled at home and served piping hot, packs a juicy succulence that this Beast lacks. In flavor and texture, the current Beast reminds me of the Salisbury steak of my youth—not exactly something to celebrate, but not terrible, either.

In an excellent 2013 piece on Beyond Meat and other faux-animal-product purveyors, Mother Jones‘ Sydney Brownstone had a similar reaction to the company’s chicken strips: “Without any sauce or fixings, the strips’ flavor resembled that of a grilled Chick-fil-A breast abandoned in a cup holder for a few days.”

Nor do I find the people behind these companies particularly appealing. Both Jacobson and Brownstone portray the shakers and movers driving the new-wave meat alternatives as Silicon Valley-funded, jargon-spouting techsters—the kind I look to for a clever smartphone app, not for lunch.

So why am I abandoning my opposition to fake meat? Jacobson drives home a point that’s been made before, but it’s starting to convince me:

Why turn plant proteins into burgers and dogs? Why not just eat them as peas and soybeans and seeds? To which I say: taco, chimichanga, empanada, crepe, pierogi, wonton, gyoza, stuffed roti, pupusa, pastie, pig in a blanket, croque monsieur, pastrami on rye. Culture is a lump of flesh wrapped in dough. If you want to save the world, you’d better make it convenient.

Companies like Beyond Meat will never be able to introduce pea protein powder into one end of a machine and extrude a convincing substitute for seared steak or roasted chicken from the other. But maybe they can replicate the way most people actually experience meat: As part of some heavily seasoned, hyperprocessed concoction. Brownstone’s devastating description of her experience eating that fake chicken product involved bare strips. But tweaked with “Southwest-style” seasonings, she reports, “they really did taste startlingly similar to what I remember from my pre-vegetarian days.”

While I still maintain that you’d be better off just eating beans than hyperprocessed beans made to simulate meat, I can acknowledge that most people don’t want to eat just beans—and that these products are likely nutritionally superior to the factory-farmed meat they aim to replace. And Jacobson supplies evidence that such products are already luring meat eaters away from meat at fast-food joints. “When Chipotle added shredded-tofu Sofritas to its burrito options at a few California restaurants in 2013, sales outstripped expectations,” he reports. “Half the Sofritas buyers, Chipotle found, were meat eaters.”

Part of me still recoils against accepting highly industrial transformations as the solution to anything food-related. And I consider animals, even cows, to be a vital element of truly sustainable and productive farming. I’d still love to see huge swaths of Midwestern corn and soy country be converted to pasture for grass-munching, soil-building beef cows. Meanwhile, though, our vast meat industry lurches on, sucking in tremendous amounts of resources and churning out all manner of destruction, along with meat that isn’t much more appealing to me than Salisbury steak-like “beef” or “chicken” strips that savor of days-old Chick-fil-A.

All of which brings me back to that 2012 Bittman piece—the one I dismissed at the time. Why, he asked, turn to Tyson and other gigantic meat companies to “use the poor chicken as a machine to produce meat when you can use a machine to produce ‘meat’ that seems like chicken”—and much more efficiently? According to Jacobson, it takes 36,000 calories worth of corn and soybeans to produce 1,000 calories of feedlot beef. It’s obviously preferable just to shove that feed into a processor, tweak it a bit, and produce something beeflike. Especially if, as Jacobson, Brownstone, and Bittman all seem to think, people will eventually embrace such substitutes (even if I won’t—I’ll still process my own beans, and eat a little well-raised meat).

If these Silicon Valley tech bros can “disrupt” Big Meat into oblivion, I now say, “bon appétit.” I could live happily enough in world in which factory-farmed meat is replaced by factory-tweaked bean products, while pastured-based animal farming still flourishes alongside it.