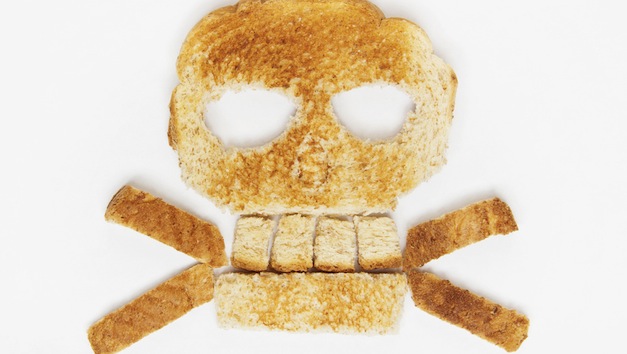 Is bread the devil? No, but it's complicated. iodrakon/Shutterstock

Is wheat a “perfect, chronic poison,” in the words of Wheat Belly author William Davis, or an innocuous staple that has been demonized to promote a trendy line of gluten-free products? I dug into the issue of wheat and its discontents recently, and walked away with some informed conjectures, but also a sense that the science is deeply unsettled. Now, a group of Cornell researchers (joined by one from Thailand) have performed a great service: For a paper published in the journal Comprehensive Reviews in Food Science and Food Safety, they’ve rounded up and analyzed the recent science on wheat and the potential pitfalls of eating it. Here are the key takeaways:

• Eating wheat may contribute to an array of health problems. When we eat wheat and other grains, we’re ingesting seeds—things that evolved to protect their nutrients against a variety of predators until they’re released by germination to fuel the growth of a seedling. So there’s no surprise that they contain “structures that are difficult for digestion to break down,” as the paper puts it. Everyone knows about celiac disease—a genetic condition in which gluten, a wheat protein, triggers a severe autoimmune response that damages the small intestine. The authors note (as I did in my recent piece) that research suggests that celiac rates have risen by as much as a factor of four over the past half century—but it still only affects at most 2 percent of the population. Wheat allergy is another well-established condition involving gluten and other wheat proteins, but it’s even less common, affecting somewhere between 0.2 percent and 0.5 percent of the population. The paper’s lead author, Lisa Kissing Kucek, told me she found no evidence of changes in wheat-allergy prevalence.

Wheat might be taking the bulk of the blame for conditions linked to a much broader category of foods.

• But unless you have celiac or an allergy, gluten might be largely beside the point. According to the researchers, most of us can tolerate gluten. But we have more trouble with another component of wheat called fructans, assemblages of fructose molecules that typically behave like dietary fiber—they’re “generally beneficial for most individuals by promoting the growth of healthy gut probiotics, improving stool frequency, and adding fecal bulk,” the authors note. But the authors point to emerging research suggesting that fructans are one of a group of carbs called FODMAPs (short for “fermentable oligosaccharides, disaccharides, monosaccharides, and polyols”) that for some people cause “unexplained bloating, belching, distension, gas, abdominal pain, or diarrhea,” as a recent paper by Georgia Regents University researchers put it.

The catch is that wheat is by no means the only foodstuff that contains fructans or FODMAPs. “Fructans are also found in 15 percent of all flowering plants, including artichoke, banana, broccoli, garlic, leek bulb, melon, onions, white peach, and rye,” the authors report; while FODMAPs are found in beans, milk, stone fruit, cabbage, and Brussels sprouts. And the food industry has seized upon a non-wheat-derived fructan called inulin as a food additive—it’s even used to “improve structure, color, taste, and fiber content in gluten-free breads,” the authors note.

Irritable bowel syndrome, which affects between 11.5 percent and 14.1 percent of the population, is the most well-known condition linked to fructans and FODMAPs. Another one is a disorder I’d never heard of, fructose malabsorption, which could afflict as much as 38 percent of the population, though the authors note that no large-scale epidemiological studies have been done to firmly establish how common it is. People with fructose malabsorption can’t absorb the free fructose present in the digestive tract, and the “unabsorbed fructose undergoes bacterial fermentation and induces abdominal symptoms, such as pain, bloating, and altered bowel habit,” the authors report. They note that irritable bowel syndrome, fructose malabsorption, and nonceliac wheat sensitivity “share a broad array of symptoms” and that “misdiagnosis is common” among them.

Overall, the scientific literature “does not support” the claim that “consuming ancient or heritage wheat prevents sensitivity.”

But since nonceliac wheat sensitivity affects less than 1 percent of people and the other two maladies appear to be much more common, it seems to me that wheat is taking the bulk of the blame for conditions linked to a much broader category of foods. The rise of fructose malabsorption, which is an emerging diagnosis and not fully understood, implicates another controversial foodstuff: high-fructose corn syrup. The authors note that overall fructose consumption has surged in the last 30 years, “largely due” to a 60.8 percent jump in high-fructose corn syrup sweetener availability since 1978.

• “Premodern” wheat varieties are not a panacea. A lot of anti-wheat sentiment targets modern breeding. The idea goes that wheat varieties developed before 1950 contain simpler proteins and are thus easier to digest than the strains that now dominate bread production. The authors found a grain (so to speak) of truth to back up this critique: Modern wheat does tend on average to contain slightly more celiac-triggering proteins than modern varieties, but not universally so; some old varieties are highly reactive and some new varieties have low reactivity. Overall, the scientific literature “does not support” the claim that “consuming ancient or heritage wheat prevents sensitivity,” they found.

What’s more, some heritage wheat varieties also appear to contain higher levels of fructans, they found. “If you have a wheat sensitivity, it’s important to know what’s causing it” before you make dietary decisions, Kissing Kucek said. The ancient wheat variety einkorn, for example, is “particularly promising for producing fewer immunotoxic effects in celiac research studies,” the authors conclude. But it also (based on limited data) seems to have higher fructan levels, meaning that it could trigger more discomfort among the fructan-sensitive than standard wheat.

• All of that said, gluten does matter, and here’s why. Let’s go back to the fact that celiac rates seem to have risen over the past half century. Kissing Kucek said that for the genetically susceptible, celiac can be a latent condition that is triggered after years of exposure to gluten. The paper highlights two factors that have increased people’s exposure to gluten over the past half century—both of which I focused on in my piece published online a few weeks ago. The first is the practice of adding isolated wheat gluten to a variety of products, including bread. A wheat-processing byproduct called vital wheat gluten is now “commonly” added to commercial whole wheat bread, and it’s also widely added to processed meats, reconstituted seafood (think imitation crab), and certain vegetarian meat substitutes. And that’s not all—the authors point to a 2010 Australian study finding gluten and other wheat byproducts in nearly a third of supermarket processed-food products (as a form of protein, gluten is cheaper than soy or whey, the authors found, making it an attractive protein booster).

Then there’s industrial bread-baking, with its rapid-rising doughs driven by isolated yeasts. The authors note (again, as I did in my piece), that longer rises with sourdough starters (which are a diverse community of yeasts and bacteria) reduces the reactive gluten in bread doughs. Importantly, the research team adds that while sourdough breads have less reactive gluten than industrial loaves, they certainly aren’t safe for people with celiac or wheat allergy. Their main advantage, Kissing Kucek told me, is that they can help stave off the onset of celiac in people who are genetically susceptible to it by reducing their exposure. As for fructans, the diverse microbial cultures in sourdough can “decrease, but not eliminate” them, too, she added.

My main takeaway from this exhaustive report on the still-unsettled science around wheat is this: The role of wheat in our health is a complex topic—one not well illuminated by marketing efforts like the ever-burgeoning “gluten-free” one. For the 98 percent or so of people not suffering from celiac or wheat allergy, it seems wise to stick to sourdough-style bread and avoid foods laden with additives like inulin, high-fructose corn syrup, and vital wheat gluten.