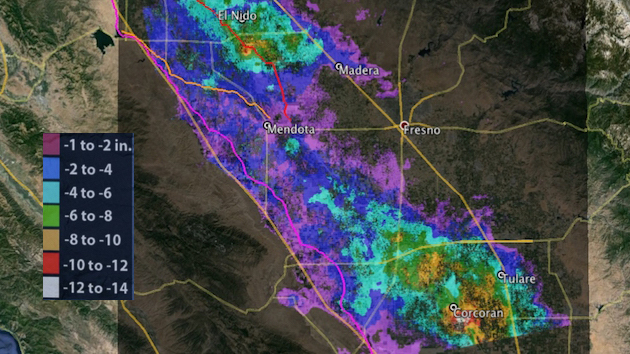 • The Central Valley is sinking—really fast. A new satellite analysis from NASA found that vast swaths of the state’s most important growing region—a massive national supplier of vegetables, fruit, and nuts nationwide—is dropping as farmers tap underground aquifers to compensate for lack of water from the state’s irrigation projects. Subsidence, as the phenomenon is known, damages crucial infrastructure like aqueducts, train tracks, bridges, roads, and flood-control structures. As a June 2015 Center for Investigate Reporting article showed, no state agency keeps track of the financial cost exacted by repairing the ravages of subsidence, but the price tag is likely already in the tens of millions of dollars. Some of the most severe subsidence, NASA found, occurred along the California Aqueduct, damaging a network of canals, pipelines, and tunnels that carries water collected from the Sierra Nevada Mountains to the southern Central Valley’s farms. Subsidence also permanently reduces the underground aquifers’ water storage capacity, NASA adds.

• Climate change is making the whole situation worse. In addition to an epochal drought—driven mainly by lack of winter snows in the Sierra Nevada mountains, the engine of California’s water system—the state is also experiencing historically warm temperatures. And while climate change  isn’t likely the main factor behind the precipitation drop, it does likely drive the current heat wave. This year, California and much of the western US have endured record-high temperatures, the National Oceanic and Atmospheric Administration reports. 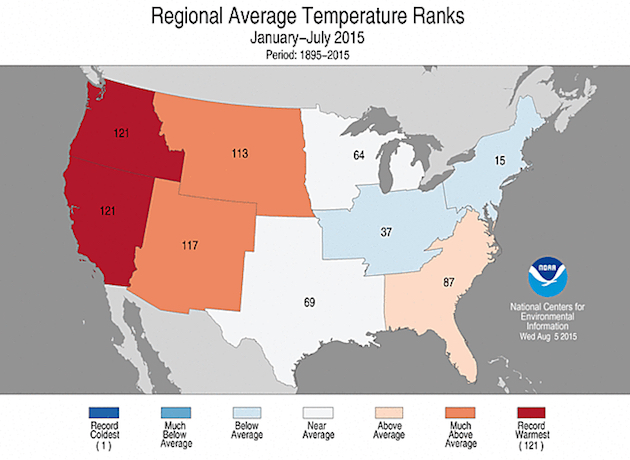 Hot weather, of course, compounds the impact of droughts: It accelerates the loss of water stored in soil, vegetation, aqueducts, and reservoirs, a process known as evapotranspiration. In a just-published paper, researchers from Columbia University and the University of Idaho looked at temperature and precipitation data gathered between 1901 and 2014 and compared them to climate change models. They concluded that California’s recent dearth of precipitation can be explained mainly by natural variability, but that that climate change-induced evapotranspiration has contributed dramatically to the drought’s severity. Think of it like this: Lack of precipitation has severely limited new water coming into California, and climate change has hindered the landscape’s ability to hold onto what little water is available. Over all, increased evapotranspiration is responsible for as much as 27 percent of the state’s current water shortage, they calculated. Worse, going forward, “anthropogenic warming has substantially increased the overall likelihood of extreme California droughts,” they concluded.