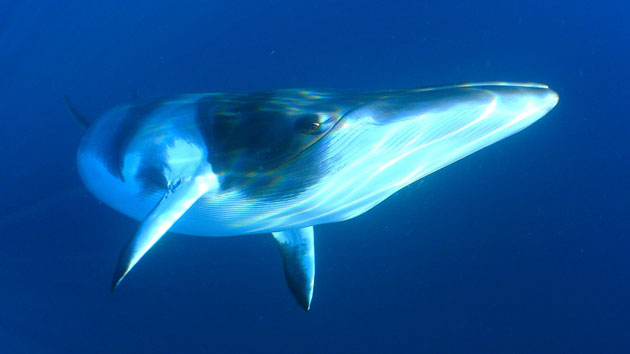 Japan is dead set on hunting whales—international critics be damned. In 2014, the International Court of Justice ordered the country to stop hunting whales. But at the beginning of this month, Japan announced it would send a small whaling fleet into the Antarctic Ocean to kill 333 minke whales under the guise of a scientific program.

As you can imagine, the announcement inspired swift condemnation. “We do not accept in any way, shape or form the concept of killing whales for so-called ‘scientific research,'” thundered Australian Environment Minister Greg Hunt. “Japan makes no secret of the fact that the meat resulting from its so-called scientific whaling programme ends up on the plate,” the BBC reports.

“Japan makes no secret of the fact that the meat resulting from its so-called scientific whaling program ends up on the plate.”

And yet Japanese consumers aren’t exactly clamoring for whale meat. As Wired‘s Sarah Zhang recently pointed out, whale meat was only that popular across the island nation during a short period following World War II. Nowadays, consumption stands at 4,000 to 5,000 tons annually. That may sound like a lot—until you consider that the nation consumes about 600 million tons of total seafood each year, meaning meat from the charismatic sea mammals occupy a vanishingly small place on the nation’s dinner plate.

What’s more, Japan’s whaling program is miniscule. According to the American Cetacean Society, the global population of minke whales stands at more than 1 million. The BBC reports that Japan has harvested 3,600 minkes since launching its current “scientific” program in 2005. As rotten as it is to envision 333 more being added to the carnage, Japan’s controversial harvest isn’t likely to result in a major shift in the minke’s fate. Norwegian whalers also hunt minkes, with a quota of roughly 1,000 a year, as do the Icelandic. 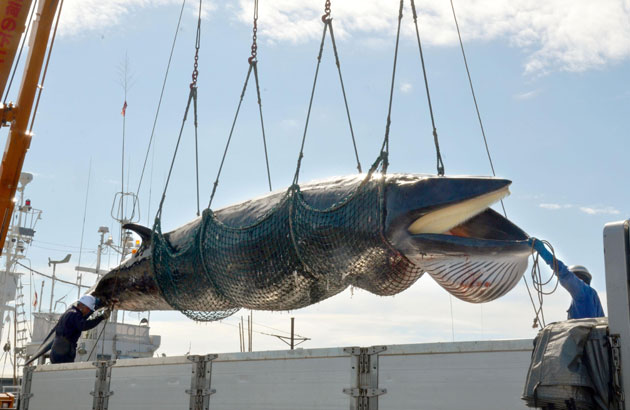 So why does the Japanese government insist on scandalizing the globe’s whale protection activists by maintaining a whaling habit, albeit a tiny one? As Keiko Hirata, a political scientist at California State University-Northridge, notes in a paper, Japan is typically quite cooperative in global environmental efforts. Indeed, the country was an original signee of the 1997 Kyoto Protocol to reduce greenhouse gas emissions to curtail global climate change. The United States, by contrast, upholds impeccable anti-whaling policies, but its refusal to sign the Kyoto pact essentially derailed that effort. Japan also participated in the successful global effort to curb the use of ozone-damaging chemicals.

Hirata attributes Japan’s pro-whaling anomaly to two factors. The first is cultural. Unlike Americans, Japanese people don’t tend to see whales as charismatic mammals that should be protected from human consumption by a universal taboo. Hirata points out that in Japanese, “the symbol for whale (pronounced kujira) includes within it a component that means fish.” Since whales are considered just a really big fish, she writes, “most Japanese lack any special love of whales and disagree with Western animal rights activists who insists on whales’ rights.” Sanctimony about whales translates as cultural prejudice:

To the Japanese, it is hypocritical that Westerners consider it morally wrong to kill certain mammals such as whales but that they consider it acceptable to kill others such as kangaroos (in Australia) and baby cattle (in the United States).

The second factor is political, she writes. Japan’s whaling efforts are overseen by the Ministry of Agriculture, Forestry, and Fisheries, which operates under very little domestic political pressure to end Japan’s whaling program. Maintaining it in the face of global condemnation, she writes, is about maintaining political turf. “Given intense inter-ministerial rivalries in Japan,” she writes, “it is not likely that these bureaucratic actors would voluntarily concede one of their areas of jurisdiction.” In short, if the whaling program ended, certain officials would find themselves out of work.

Because of these factors, “Japan is unlikely to change its pro-whaling stance in the near-to-medium term, barring any major unforeseen event,” she concludes.

Lamentable as the stance is, at least global accords have hemmed in Japan’s whaling ambitions to a small effort targeting the minke, which is not currently endangered. If only that were true of the bluefin tuna—an endangered species for which Japanese eaters maintain a voracious appetite.