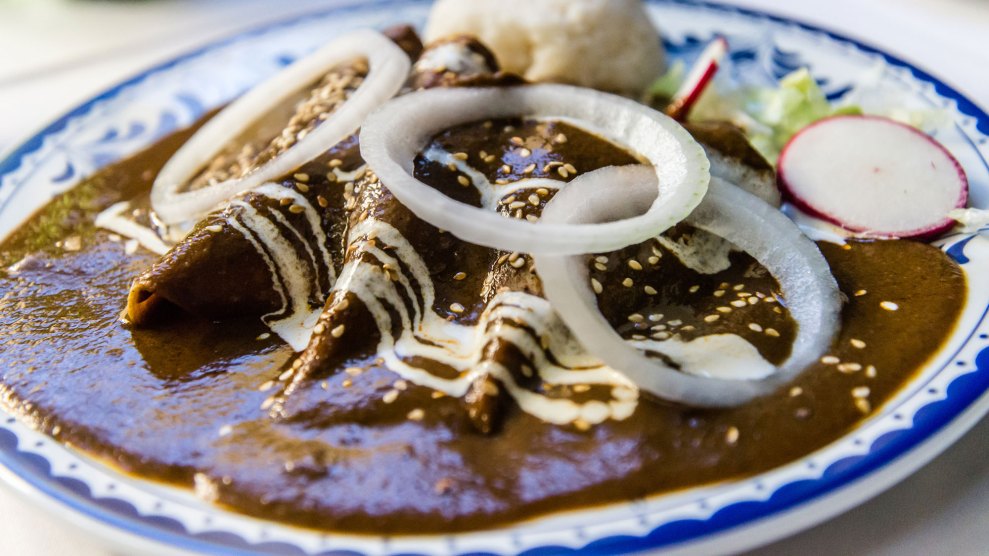 Traci Des Jardins, a Top Chef Masters finalist and owner of six San Francisco restaurants including the much-lauded Jardiniere, hopes her award-winning French-rooted cuisine inspires pleasure and satisfaction above all—but knows that it’s sometimes impossible to avoid the spice of politics. The question of how far to wade into political territory—without distracting from the food she concocts—is often on her mind. “I’ve always tried not to be preachy in my restaurants,” she said on a recent episode of Bite podcast. (The interview starts at 5:45 of the episode below.)

But some causes tip the scales. On Jardiniere’s receipts, she now includes a tiny message at the bottom that reads, “Immigrants make America great! They also cooked and served you dinner this evening.”

“We’ve had people write on the bottom of the checks: ‘I’ll never come back here again,’” after seeing a message in support of immigrants.

“Immigrants are the backbone of the restaurant world,” Des Jardins says. “I think it’s incredibly important in the political climate that we’re in to really acknowledge that.” But even in liberal San Francisco, not all diners agree, she says: “We’ve had people write on the bottom of the checks: ‘I’ll never come back here again,’” after seeing the message. “There’s a lot of vitriol.”

In early September, President Donald Trump rescinded Deferred Action for Childhood Arrivals (DACA), a program that allowed certain undocumented immigrants known as Dreamers to procure two-year work permits. Though the program is slated to end, roughly 154,000 immigrants in the country are eligible to renew their benefits one more time if they file before October 5 for a fee of $495.

And Des Jardins was once again drawn into a political cause. It started with chef Andrea Lawson Gray, author of Celebraciones Mexicanas and a private chef in San Francisco who runs a group of top-rated local private chefs. “The night Trump was elected, I felt we really needed to do something,” Lawson Gray says.  “We had the power to put ourselves together and create a meal for good.”

When she learned that the DACA program was ending, Lawson Gray thought first of her daughter-in-law, a former Dreamer who had finally qualified for her permanent residency just weeks before. The aha moment arrived when a friend put Lawson Gray in touch with Mission Asset Fund, a nonprofit lending organization that is providing financial assistance to more than 2,000 Dreamers eligible for DACA renewal, many of whom can’t afford the fee.

Lawson Gray spent the next three weeks organizing a benefit dinner to raise funds for Mission Asset’s scholarship. One of the chefs who agreed to help was Rogelio Garcia, executive chef of Des Jardins’ The Commissary restaurant. He approached Des Jardins about the benefit, and she offered up a dining room at her restaurant Jardiniere. “I think Rogelio got the impression that this would happen,” Lawson Gray says of Des Jardins’ offer. “I think this is very personal for her.”

Des Jardins’ grandparents came from Mexico, and she has employed DACA recipients at her restaurants. “They’re part of the fabric of our culture, and they have a place here,” Des Jardins told CBS Local.

The dinner, which took place on September 25, raised nearly $10,000 that night, with donations continuing to arrive in the days after. Lawson Gray, one of the four chefs preparing the dinner, made blackberry mole with shredded chicken on a puree of sweet plantains, served on a blue corn tortilla topped with queso fresco and a plantain chip. Two Dreamers spoke about their own experiences and the importance of renewals.

“Just take whatever talents you have and get together with other people and make things happen,” urges chef Andrea Lawson Gray.

The day after the event, Lawson Gray reflected that the dinner really seemed to “touch a nerve for people,” and said she believes it was the first event of its kind in the country. City leaders in pockets of the country, and Rhode Island’s governor, have also offered funding for DACA renewals, but Lawson Gray hadn’t heard of any other chef events like this one. She hopes to work on similar politically inspired fundraising dinners in the future. “Just take whatever talents you have and get together with other people and make things happen,” she urges.