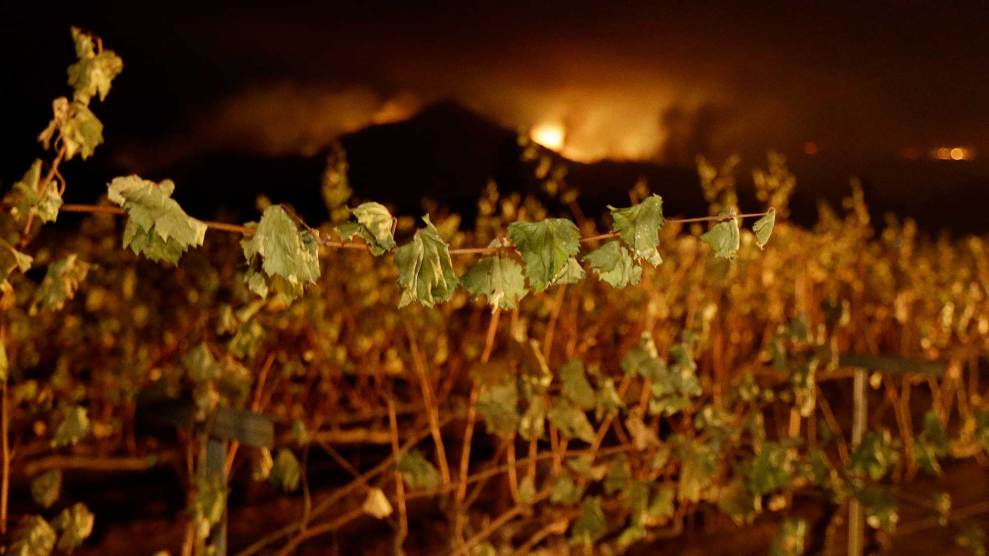 A wildfire from a distant mountain burns over a vineyard in Kenwood, Calif., Tuesday, Oct. 10, 2017.Jeff Chiu/AP

It was still dark on Monday morning in the Dry Creek Valley when the phone jolted Duff Bevill awake. It was one of his neighbors. “He said, ‘Jesus, Santa Rosa’s on fire,’ Bevill recalls. “And I said, ‘I don’t know what you’re talking about.” Bevill’s own house, to the west of Healdsburg, California, was outside the path of any of the 11 blazes that sparked Sunday night and continue to devour parts of Northern California’s wine country.

He dialed up his business partner, Matt Vogensen, who helps him run Bevill Vineyard Management. Vogensen confirmed that the Tubbs Fire, now one of the deadliest in the state’s history, was careening down the hills towards some of Santa Rosa’s neighborhoods. The men quickly called off their crews of pickers, who’d been stripping vines of the season’s last Zinfandel grapes outside of Healdsburg since 12:30 am.

Five days later, firefighters have barely managed to make a dent in the biggest of the wildfires incinerating residential neighborhoods and swaths of farmland in Sonoma and Napa Counties. More than three thousand structures have burned, and tens of thousands of people have been evacuated. Bevill knows at least 20 people who have lost their homes.

But since Wednesday, his company is back to work, finishing out the harvest and making sure payroll goes through. “You feel a responsibility as an employer,” Bevill explains via phone call from his ranch in Geyserville.

Bevill’s is not the only vineyard crew back in the fields: Brad Peterson, a vineyard manager at Silver Oak and Twomey Cellars, finished harvest on Thursday “in some pretty thick smoke.” Armando De Luna, who works at Robert Sinskey winery, posted a video on Instagram Friday showing the winery pressing grapes.

Even as the remnants of this year’s harvest work resumes, it is already apparent that the wildfires have hit the state’s agricultural community especially hard, exacting an economic toll that will take months to digest. “Hundreds of farmers, ranchers, and critical agricultural service businesses across the state have lost everything,” the environmental organization the American Farmland Trust wrote in a blog post this week.

In Sonoma County alone, agriculture and livestock, including 30,000 dairy cows and 35,000 sheep and goats, is worth close to $900 million. Napa and Sonoma Counties produce the majority of the state’s high-end wine grapes and house more than 1,000 wineries. Several historic wineries have succumbed to the flames or been partially damaged; the San Francisco Chronicle is keeping track of them here. The state’s wine industry, which produces 85 percent of the country’s offerings, generated $15.2 billion in taxes in 2016, according to the industry group the Wine Institute.

Early Monday morning, after his crews hauled in the last of the Zinfandel grapes, the company tried to deliver the 22 tons to the St. Francis Winery, but their contact there, a resident of a neighborhood in Glen Ellen, was preoccupied “trying to get out of her place because it looked like the whole home was going to blow up.” The grapes went to another Healdsburg winery instead who had the resources to deal with them.

Sonoma County Winegrowers and the Napa Valley Vintners group both estimated that 90 percent of the region’s grapes had already been harvested by last weekend. For those left on the vines, “It is almost all Cabernet Sauvignon,” the Napa Vintners stated in a wildfire update. “Our winemakers report that this thick-skinned variety, fully-developed and ready to be picked for the 2017 harvest, is not expected to be impacted by the smoke from the fires.”

The compounds in wildfire smoke don’t necessarily have any effect on the look or taste of a wine grape, but can later result in off flavors and aromas that render the resulting wine undrinkable. It’s too early to estimate how many vines have been singed, but a single acre of vines can cost an estimated $15,000-$25,000 to replant, according to one grower. Wineries that need to replant will have to wait three to five years before those vines can produce grapes again, the president of the Sonoma County Winegrowers told the New York Times.

Sonoma County has around 6,800 farmworkers, the majority of them in viticulture. Bevill, who’s completing his 44th harvest this season, employs office staff, foremen, and 75 hourly workers who tend vineyards for wineries across the region. While several of them had to evacuate their houses this week, that doesn’t necessarily mean they’re taking time off. One of his employees, who lived in an apartment complex in Santa Rosa that burned down, is considering taking his family down to Modesto, 150 miles away, and coming back up to work. “If they’re hourly, they want to earn a paycheck,” Bevill says.

Among his company’s employees are 24 Mexican men temporarily in Sonoma on the H-2A visa program, which allows employers to import seasonal workers. The program, which is costly and logistically complex, requires employers to provide federally approved housing for all of their visa-holders.

Bevill’s crew of H-2A workers, who arrived in June, live in a dormitory in the Windsor area north of Santa Rosa. On Tuesday evening, a grass fire broke out a quarter mile away from the bunk house. Several of the men rushed outside and hooked up hoses to water down the surrounding area. The flames began licking the grass within about 200 yards of the dorm, but luckily it was a slow-moving blaze, and the fire department put it out right away. This small fire had no relation to the larger Tubbs Fire raging a good four miles away, and Bevill’s not sure how it got there. “Some people suspect it was arson,” Bevill says—but so far there hasn’t been a lot of time for investigations yet this week.

His crew of H-2A workers still have a place to sleep at night, but many others aren’t so lucky. The damage from the fires will exacerbate a housing crisis that had already become untenable for many agricultural workers in Sonoma County. University of California-Davis Professor of Agricultural Economics Philip Martin points out that the HUD fair-market rent for a two-bedroom apartment in Napa and Sonoma Counties is $1,600 a month. A farmworker employed for 160 hours a month earning $15 an hour makes $2,400, and would have to spend two-thirds of his income on rent. Many vineyard workers already commute from cities as far as Stockton to make the math work.

The fires will make local housing even scarcer. “I don’t know what they’ll do,” Bevill says, of the hundreds who have lost their homes. “All these people are just going to leave,” he worries.

In the meantime, Bevill’s trying to keep his own employees busy. “You want to make the work available. A lot of these guys, if their family is safe, they want to get back into the routine as much as possible.”