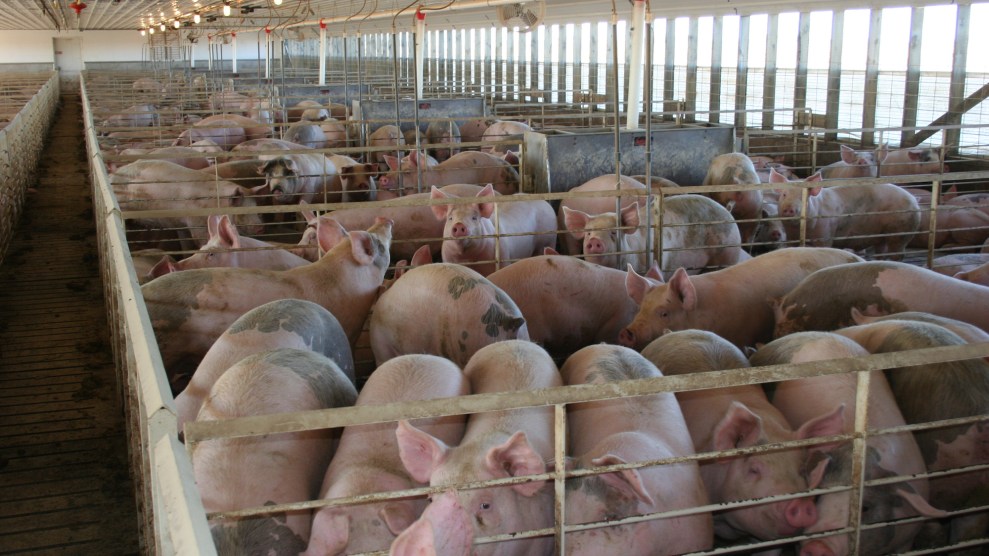 In the midst of last week’s, um, stormy news cycle, the meat industry quietly scored a pair of legislative coups, both of which bolster corporate power to impose the downsides of factory-scale animal farming on communities.

One victory will affect people who live near these large operations. In North Carolina alone, 160,000 people reside within a half mile of vast open cesspools full of manure from thousands of confined hogs. If you lived in such conditions, you’d probably want to know what pollutants you and your family were breathing from the foul-smelling air wafting from these operations.

In North Carolina,160,000 people reside within a half mile of vast open cesspools full of manure from thousands of confined hogs.

Folded into the omnibus spending bill signed by President Donald Trump last week is a rider that will prevent such knowledge from reaching public view. It’s based on a bill called the “Fair Agricultural Reporting Method Act” (get it? FARM), which proposed to free most livestock operations from having to report the air-borne toxins emitted from the manure they accumulate. These gases, which include ammonia and hydrogen sulfide, can trigger ill health effects in neighboring communities, including eye irritation, chronic lung disease, and olfactory neuron loss. The pork, beef, and chicken trade groups all hotly supported the measure, which is now the law of the land.

The Center for Progressive Reform’s Laurie Ristino has the backstory. Since the late 1990s, the Environmental Protection Agency has been concerned about air pollution from these concentrated animal feeding operations, or CAFOs. But the agency has never come up with a plan for monitoring their emissions—a saga laid bare by the EPA’s Office of the Inspector General scathing 2017 report, as well as by this 2017 ruling by the DC Circuit Court of Appeals.

The passage of the FARM rider in the omnibus bill preserves the know-nothing status quo. Patty Lovera, assistant director of Food & Water Watch, says the provision amounts to a “missed opportunity to get a handle on what some of these facilities are releasing—which means communities nearby do not even know what they are being exposed to.” And if federal agencies can’t measure the air-borne pollutants wafting off of CAFOS, they also can’t force the industry to cut emissions, Lovera adds. By ending the effort to collect data, the provision lets the big meat companies “argue that the EPA doesn’t have enough data to come up with regulations.”

If federal agencies can’t measure the air-borne pollutants wafting off of feedlots, they also can’t force the industry to cut emissions.

Meanwhile, in Kansas, the chicken industry scored a victory in the state legislature with the signing into law of State Senate Bill 405 last week, which loosens restrictions on the size and placement of large-scale livestock facilities.

Under the previous state code, chicken CAFOs with more than 125,000 birds had to be sited at least 4,000 feet—about three quarters of a mile—from any residence. Now, facilities with as many as 333,000 birds can be constructed just a quarter-mile from people’s homes, potentially exposing them to polluted air and water.

As Leah Douglas notes on FERN’s Ag Insider, the bill is widely seen as a legislative response to the plight of the giant meatpacker Tyson, which last year abandoned a plan to open a massive, poultry-processing complex in the state after much pushback from communities there.

Loosening regulations on chicken CAFOs makes Kansas more attractive to big poultry packers like Tyson in the future. Tyson’s now-stalled proposal to place a plant in the northwestern Kansas town of Tonganoxie would have had the capacity to slaughter 1.25 million bird per week and required as many as 400 new chicken-raising CAFOs within a 50-mile radius, reports the trade journal Meat+Poultry. The new, less stringent rules will make such a build-out less cumbersome.

The agribusiness lobby promoted the bill as tool for generating “new growth opportunities within the agricultural industry,” as the Kansas Farm Bureau put it in a note to members. “Kansas Farm Bureau believes the provisions in SB 405 will attract new agricultural business by clarifying where these facilities fit in the current regulatory environment,” the group stated.

But to grow their flocks, chicken packers rely almost exclusively on quasi-independent farmers to build and maintain the facilities and grow out birds under contract. As a 2014 USDA study showed, contract poultry farmers on average make about $11.50 per hour in income, after accounting for operating expenses and interest on loans required to build and maintain the facilities. (More on the vexed economics of contract poultry farming here.)

Meanwhile, Tyson has rolled out plans for a very similar plant in Tennessee, egged on in part by $34 million in tax abatements and other incentives. Last year, the Tennessee legislature passed a law forbidding the state’s department of environment to regulate CAFOs “more stringently than federal law requires.”