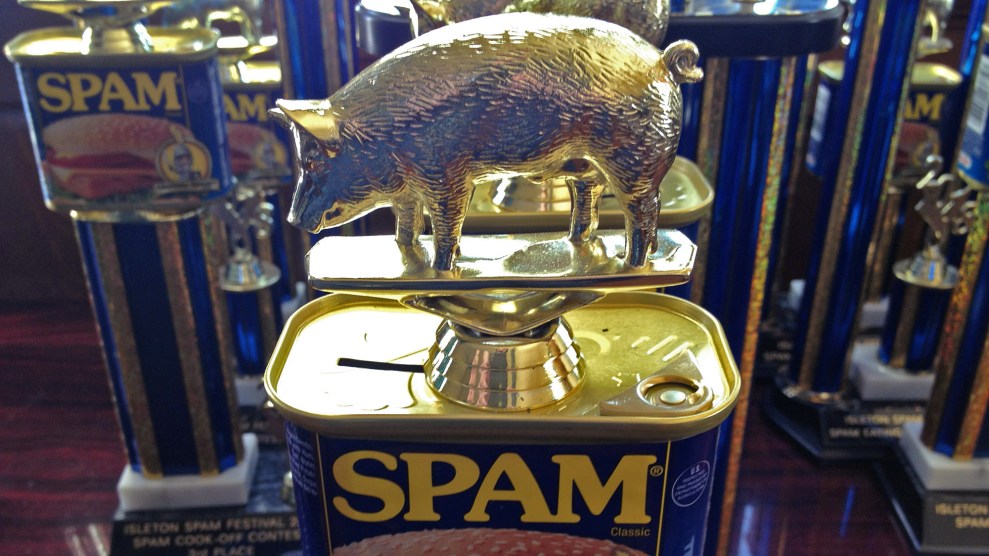 In the winter of 1996, a flood hit Isleton, California. As residents returned to their homes and went through their kitchens, they found that the paper labels on their canned foods had disintegrated. The only identifiable product, thanks to its printed aluminum can, was Spam. For the past 20 years, the town of roughly 800 people on the Sacramento River has commemorated this postdiluvian miracle with an annual Spam Festival.

This year’s event, held on February 18, featured a hands-free Spam eating contest and an uncanned Spam toss. But the centerpiece was the cooking contest. Nearly 20 contestants vied for a chance to get their names inscribed on the Spamley Cup, serving up creations such as Spam tacos, Spam pasta, Spam gumbo, Spam tamales, deep-fried jalapeño Spam on a stick, Spam meat pies, Spamaroni and chesse, Spam jerky (“Sperky”), and Spam cheesecake. “There’s so many different dishes. It’s so versatile, you’ll be surprised how many good dishes come out of that stuff,” said Paul Steele, this year’s Spam King, dressed as a can of a Spam. “You know, believe it or not, Spam ice cream is pretty good!” (Listen to my audio postcard to hear about the festival in the Bite episode below.)

Though you may not want to know how it gets made, there is no denying Spam’s place in American cuisine. Since it introduced Spam in 1937, Hormel has sold more than 8 billion cans of its signature canned ham product. There are now 15 varieties, including Hot & Spicy and a Lite version. Spam is a beloved staple of Hawaiian cooking: The state has the nation’s highest per capita Spam consumption and hosts the annual Waikiki Spam Jam. It’s even gone upscale: San Francisco’s Liholiho Yacht Club serves “house-made Spam”.

As Ayalla A. Ruvio, an assistant professor of marketing at Michigan State University, has noted, Spam has “formed an emotional connection with its consumers, by tapping into American ideals like ingenuity and resourcefulness.” And some of Spam’s appeal stems from its legendary shelf life—in and out of the can. Spam Fest contestant named Gary, who’d prepared a couple of plates of Rocky Mountain Spam sliders (Spam, cheddar cheese, onions, ketchup, pickles, and milk—”I’m not sure where the milk comes from”), recalled: “My mother used to make ’em when we were kids and we were traveling. We’d have them in the car. And we discovered ultimately that they were as good set underneath the car seat for three or four days as when you made them.”

And the winner of this year’s Spam Festival cook-off? Spam Benedict with quail eggs.