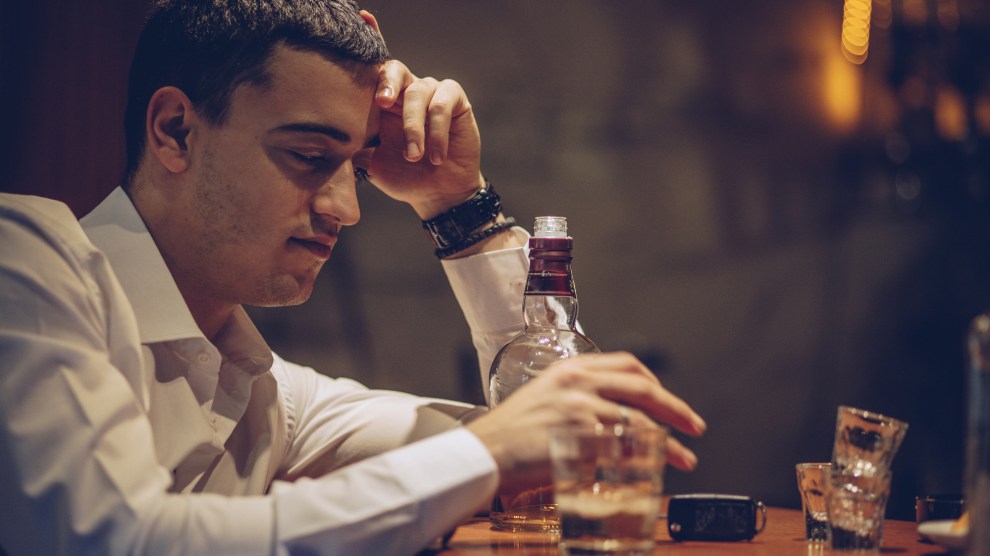 Alcohol is a carcinogen. As Mother Jones reported last month, alcohol-related cancers are estimated to kill about 20,000 Americans every year. That depressing news prompted some readers to announce that they would quit drinking. It led others to reach out to us with an important question: Does quitting actually help? In other words, if drinking raises your risk of cancer, does quitting—or cutting back—bring it down?

This question has been answered pretty definitively for smokers, who see almost immediate health benefits from quitting and a significant reduction in cancer risk within five years of their last cigarette. Unfortunately, even though the World Health Organization first declared alcohol a carcinogen in 1988, there is no comparable body of research on how ceasing to drink affects cancer risks. There are, for instance, no substantial studies on whether giving up booze affects breast cancer risk, even though alcohol is implicated in 15 percent of all breast cancer cases and deaths in the United States. Most of the scant research in this area has been done on head, neck, and liver cancers.

But those studies have good news for drinkers who are thinking about calling it quits: Going dry can bring down the risk of some cancers. It just might take a while.

Let’s start with liver cancer. About 15 percent of all liver cancer deaths in the United States are related to alcohol consumption, and as cancers go, it’s a nasty one. The five-year survival rate is only 31 percent in people diagnosed early, compared with more than 90 percent for early-stage breast cancer. Those figures make prevention especially crucial, and giving up drinking can help. A 2011 study from Sweden reviewing all the previous research on the impact of alcohol cessation on liver cancer found that drinkers’ risk may go down around 6 to 7 percent for every year they go without any alcohol. They estimated that it would take about 23 years for a drinker’s risk of liver cancer to decline far enough to equal that of someone who had never had a sip. The authors caution that there is a lot of uncertainty in those numbers, and that much more work needs to be done on this front to make a definitive finding.

The impact of drinking cessation has also been studied in head and neck cancers, which are quite deadly and disproportionately caused by alcohol. (More than 50 percent of esophageal cancer cases in men are caused by alcohol.) Here, the results are a little more concrete: Swedish researchers have found that the increased risk of laryngeal and pharyngeal cancers caused by alcohol is definitely reversible. After about five years of abstinence, the risk for those cancers fell about 15 percent. But again, the time for the body to recover and have the same risk as a nondrinker was long—more than 35 years.

The news was slightly better for esophageal cancer. Some of the same Swedish researchers calculated that quitting drinking could reduce the risk of esophageal cancer meaningfully, and in 16.5 years, the risk would fall to that of a nondrinker. And the risk reduction was front-loaded: Half of the reduction took place in roughly the first five years, so quitting could have a significant short-term effect.

All of the researchers in these studies warn that their work is far from definitive and that there hasn’t been enough research on what happens to cancer risk when people stop drinking. There are still many unanswered questions about how alcohol-related cancer risk plays out over time, and how all of these risk calculations vary depending on whether people are moderate social drinkers or lifelong alcoholics. Susan Gapstur, the vice president of epidemiology at the American Cancer Society, also notes that researchers still can’t say, for instance, whether heavy binge drinkers in college who cut back still face a higher cancer risk later in life. “It’s multifactoral,” she explains. “We can never predict who’s going to respond specifically to these exposures.”

Some of these unanswered questions are particularly relevant for breast cancer prevention, because there is mounting evidence that women may be especially vulnerable to breast cancer later in life from drinking when they’re young. Noelle LoConte, an oncologist who authored a recent American Society of Clinical Oncology statement on the alcohol-cancer link, there’s a window when drinking may be more dangerous in terms of breast cancer risk. “Specifically, it appears that the time between their first period and first full-term pregnancy is at highest risk,” she says. “This happens to be college age for many women and also when binge drinking is highest.”

That research, combined with the limited evidence showing that alcohol-related cancer risk may be slow to reverse, suggests that meaningfully cutting into alcohol-related breast cancer rates may require combating college binge drinking and reviving law enforcement efforts to reduce underage consumption. (The only federal program devoted exclusively to fighting illegal alcohol sales to underage drinkers, which once had a $25 million budget, was scaled back significantly early in the Obama administration and eliminated entirely in 2015.)

For those of us whose college binge drinking days are long past, both LoConte and Gapstur say the die is probably not cast in terms of cancer risk. The limited data is compelling enough to make a decent case for reducing alcohol consumption to hedge against cancer risks. “We do tell patients that cutting down likely does decrease their risk,” LoConte says. Gapstur recommends that people stick to the American Cancer Society’s guidelines on alcohol. Those say that if you don’t drink, don’t start, but if you do drink, limit your consumption to no more than one drink a day for women and two for men. “There are many reasons for and many health benefits to limiting consumption,” she adds. Cancer is just one of them.