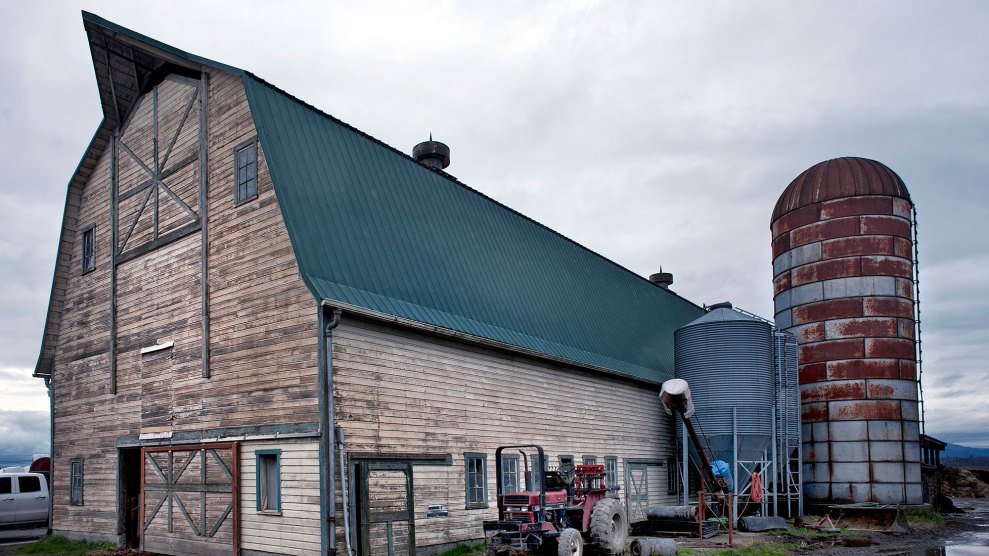 The Dykstra Dairy Farm has been a fixture in Burlington, WA, for three generations of the Dykstra family. Conventional dairy farms have been struggling for years. Until recently, Dykstra said it seemed organic dairy farms were somewhat shielded from the volatility of the conventional market. Now, organic dairies are struggling alongside conventional dairies, further adding to the impact on the local agriculture economy. Charles Biles/AP

With a trade war looming, commodity prices falling, and the dairy industry in full-blown crisis, a growing number of American farmers are embracing a controversial set of farm policies that would manage the country’s commodity production and stabilize crop prices. The policies, known as supply management, governed US agriculture for decades but were abandoned in the late 20th century as large-scale monocropping and commodity exports came to define farm policy.

“Just in the last few months, people are paying attention to it,” says writer and National Family Farm Coalition consultant Siena Chrisman of supply management policy. In prior farm policy debates, she says, “nobody ever wanted to hear about it, nobody cared, nobody knew what it was.” But in the lead-up to the next farm bill, and particularly in light of devastatingly low milk prices, she says, farmers are considering supply management with renewed interest.

Supply management can be summarized as “don’t raise more than what can be consumed,” says Gary Hoskey, a hog farmer and the former president of the Iowa Farmers Union.

Supply management can be summarized as “don’t raise more than what can be consumed,” says Gary Hoskey, a hog farmer and the former president of the Iowa Farmers Union, in a new video on farm prices produced by ActionAid USA. The building blocks of supply management are a floor price for commodities based on the cost of production, a commodity reserve that can be drawn upon in less fruitful years and contributed to in years of excess, and conservation programs that take agricultural land out of production. Those policies together could control how much of a commodity is being produced, stabilize prices for farmers, and ensure that consumer demand is met despite seasonal fluctuation.

Supply management was once the dominant farm policy in the US. The first farm bill, passed in 1933, introduced price supports and supply management for commodities, in part by establishing the Commodity Credit Corporation, which stored surplus commodities in an effort to stabilize farm prices. Some variation on supply management existed in US agriculture policy for many decades.

But in the second half of the 20th century, policymakers began calling for a free-market approach to agriculture. A major shift occurred in 1973, when Secretary of Agriculture Earl Butz called on farmers to plant “fencerow to fencerow” to increase the country’s commodity harvest. In the following years, farm policy moved away from supply management and instead dealt with low commodity prices through direct payments and other subsidies. In 1996, the last vestige of federal supply management was abandoned when the US grain reserve was closed.

The post-Butz era has been defined by large-scale commodity growing, monocropping, and the rise of powerful agribusiness corporations that increasingly shape farm policy. The culture of farming has also changed, and today, some farmers see production controls as an affront to their identity. To these farmers, says Tristan Quinn-Thibodeau, a campaigner with ActionAid USA, “being told not to produce…feels wrong. Like they are sitting idle or being paid to not work.”

But despite the shift in farm culture, policy, and politics, many farmers have held onto supply management as the best solution for ensuring they get a fair price. Before the 2007 farm bill, the National Family Farm Coalition proposed a comprehensive overhaul of the omnibus legislation that was based on supply management. In the lead-up to the 2012 farm bill, the National Farmers Union commissioned a study on the viability of the strategy, which found that if a reserve system had been in place between 1998 and 2010, it would have reduced government crop payments by nearly $100 billion while net farm income would have remained about the same.

Even the largest dairy cooperative in the country, Dairy Farmers of America, is today discussing supply management policies. In March, at the co-op’s annual meeting, delegates passed a resolution to investigate the possibility of a national production control system among co-op membership. Charles Untz, a Wisconsin dairy farmer and DFA board member who was present at the meeting, says the resolution “was a pretty good message to the co-op that we’re frustrated” with the current state of the dairy industry.

Some US dairy farmers are turning to Canada for a model of how supply management could work. Canada’s milk supply management system is built around production quotas, which can be bought and sold by farmers. Farmers are paid a government-set price for milk based on a reasonable cost of production for an “efficient” farm. Canada’s trade policy also limits how much milk can be imported without imposing tariffs.

In Quebec, dairy farmers are paid about $24 per hundredweight of milk. Just across the border in Vermont, it’s about $14.

Those trade limits have at times curdled Canada’s trade negotiations with the US, most recently in the renegotiation of the North American Free Trade Agreement. But the policies have also helped keep Canadian dairy farmers in business. In Quebec, dairy farmers are paid about $24 per hundredweight of milk. Just across the border in Vermont, it’s about $14 per hundredweight, a devastatingly low price that has caused many farms to close.

In March, the Wisconsin Farmers Union hosted two Canadian dairy officials in a series of five community meetings with dairy farmers who wanted to learn about the Canadian supply management system. Kara O’Connor, government relations director for the Wisconsin Farmers Union, says that farmers were “rapt” as they learned how Canada’s quota system works. She attributed the farmers’ interest to their disappointment in the current US approach to milk pricing. At the events, she says, presenters asked farmers whether anyone thought the current US dairy pricing system was working well. “I don’t think that in the five presentations we did a single hand went up.”

O’Connor says that “some of the challenges that dairy farmers in the United States are facing are unheard of in Canada.” Under the Canadian system, if a processor lost its market or had to close, “everyone would take a haircut so that no one would be cut off at the knees,” she says. Meanwhile, in the US, dairy farmers have been dropped by several processors and cooperatives, leaving them with few options for selling their milk.

Another reason for commodity farmers’ renewed interest in supply management is the changing structure of the agricultural economy. As processors have consolidated, farmers have fewer options when it comes to buyers and less ability to bargain for a better price, which in turn contributes to lower farm income. Quinn-Thibodeau says that, as a result, farmers “[view] supply management as a way to get fair prices. And not fair prices from consumers but fair prices from…the agribusiness corporations that they sell to.”

As processors have consolidated, farmers have fewer options when it comes to buyers and less ability to bargain for a better price.

Two US agricultural commodities have retained some form of production control: cranberries and sugar beets. In late April, the Department of Agriculture proposed a 25 percent drop in the 2018 cranberry crop in order to bring supply closer to demand. The USDA proposal is supported by the Cranberry Marketing Committee, a board comprised of growers and handlers, and Ocean Spray, the country’s largest cranberry cooperative.

Meanwhile, the supply of sugar beets is also managed by the USDA with a variety of tools, including price supports, import quotas, and limits on how much sugar each processor can sell.

The US has also used strategic reserves for other parts of the economy, notably in the oil sector. The country’s strategic petroleum reserve in Texas, retained in case of an energy emergency, can hold more than 700 million barrels of crude oil.

As negotiations for the 2018 farm bill continue, some farm advocacy groups are pushing to make federal supply management policies part of the omnibus legislation. The National Family Farm Coalition includes strategic reserves in its policy platform for the 2018 bill. The board of the National Farmers Union also supports an “inventory management program” for milk as part of the bill.

In negotiations for the 2014 farm bill, Congress considered, and initially passed, a modified supply management scheme for dairy, but the policy was cut from the final version of the bill.