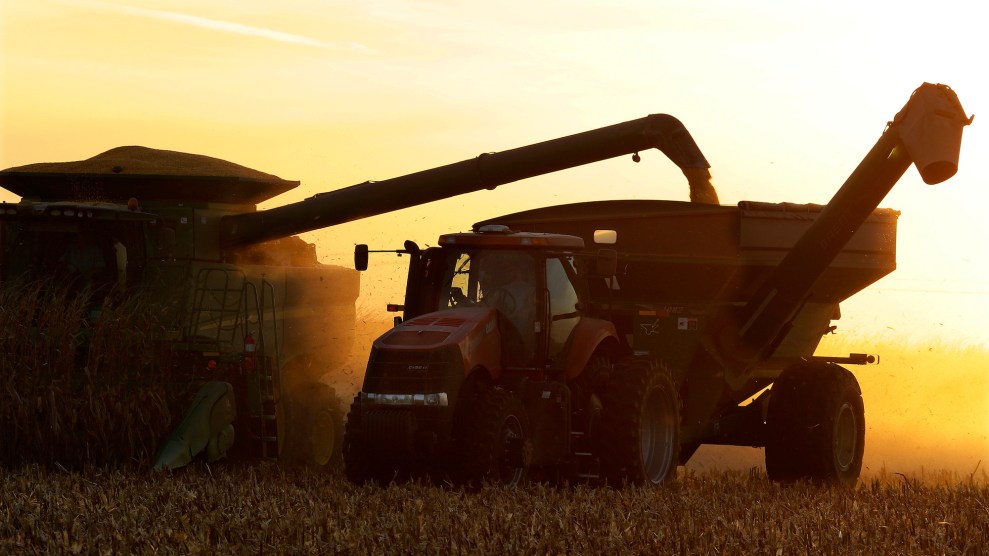 President Donald Trump’s long-simmering, multi-front trade war is about to escalate: On Friday, the United States plans to begin slapping a 25 percent tariff on $34 billion worth of goods from China, which has vowed to retaliate immediately with its own duties on US goods.

For farmers who produce the United States’ two biggest crops, corn and soybeans, the actual imposition of these long-threatened tariffs is a formality—look at what’s been happening to prices recently. Here are soybeans:

As you can see, prices began to slide in late May. That’s when the Trump team made one of its epic zigzags: After putting its trade beef with China on hold for a few weeks, the administration suddenly reiterated its tariff threats, and added Mexico, Canada, and the European Union to the mix. China is by far the biggest buyer of exported US soybeans; Mexico holds that position for corn.

The current slide comes at a precipitous time for US farmers. They have about 179 million acres of the two crops growing in their fields—a combined land mass equal to nearly two Californias, and just 1 percent less than last year’s plantings. To make a profit on these crops, farmers will have to make at least $4 per bushel on corn and $10.05 on soybeans for the 2018 harvest, a University of Illinois analysis found. Currently, the two commodities fetch $3.43 and $8.40, respectively.

Meanwhile, vast portions of last years’ bumper harvest remain unsold. Soybean farmers churned out a record 4.39 billion bushels in 2017—and more than a quarter of the harvest is still sitting in grain bins waiting for a buyer, according to figures recently released by the US Department of Agriculture. Meanwhile, farmers and grain elevators had to stockpile 5.31 billion bushels of corn, more than a third of last year’s harvest.

So when farmers watch the price of these commodities drop around 20 percent in little more than a month, they’re watching the value of their crops, both in the field and in the grain bin, dissipate. Priced at $10.40 per bushel, as they were back in late May, current unsold soybean holdings are worth about $45 billion. At today’s $8.40 price, they’d fetch around $36.9 billion—a drop of more than $8 billion in nominal value.

And the current downturn is essentially adding insult to injury—corn and soybean prices have been low since 2014. It’s no wonder farmers are expressing serious worry about Trump’s trade agenda.

In a recently leaked document that surprised no one, the Chinese government laid out its strategy for the trade showdown with its US rival. “We stop negotiation for now, acting tit for tat, roll out corresponding [tariff] policies, hold public opinion at a good level without escalating it, limit scope, and strike accurately and carefully, splitting apart different domestic groups in US,” the document states. That last bit seems to refer to targeting industries that largely supported Trump, like large-scale agriculture, for economic pain. Mexico, Canada, and the European Union appear to be pursuing similar strategies.

As the midterm elections approach, it’s worth having another look at this map of US soybean production, which, as many have noted, looks a lot like a map of support for Trump in the eastern half of the country. 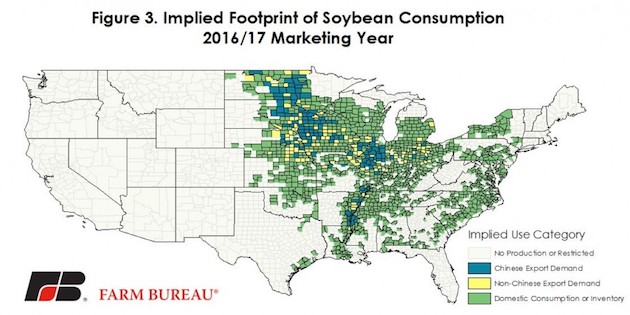 In the leaked document mentioned above, the Chinese government stressed patience in its row with Trump, noting that the trade war would likely be a “protracted conflict” requiring “calm and rationality.” Sounds like a tough opponent for a mercurial US president with a momentous election looming.