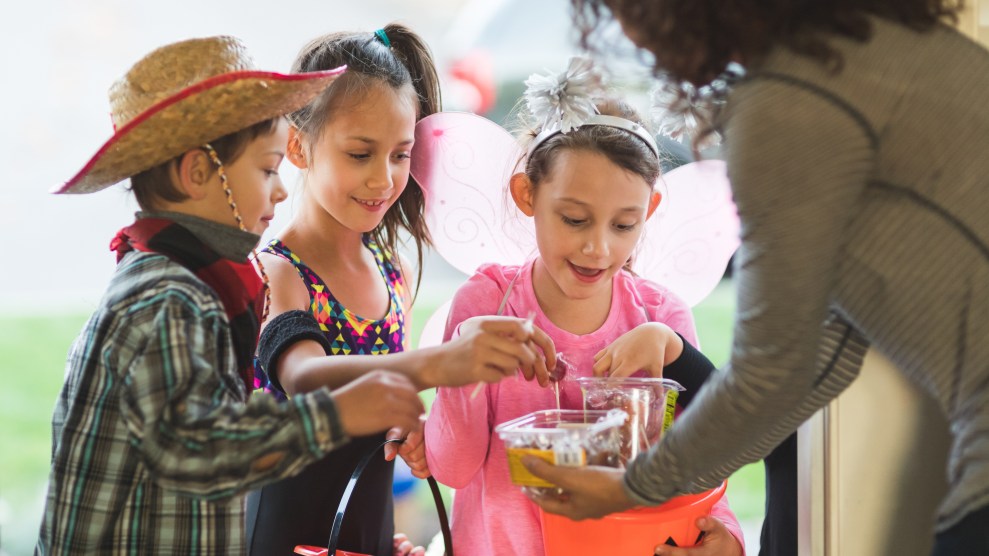 If you’re buying last-minute Halloween candy, you might want to know about a recent ruling by the US Court of Appeals Ninth Circuit in a long-running lawsuit against Nestlé and agribusiness giant Cargill that alleges the companies aided and abetted child slavery on cocoa farms in the Ivory Coast.

“The allegations paint a picture of overseas slave labor that defendants perpetuated from headquarters in the United States.”

The 2005 lawsuit was brought by former child slaves kidnapped by slavers and forced to work by plantation owners on Ivory Coast cocoa farms for up to 14 hours a day without pay. They say they were beaten, and witnessed the torture of other children who attempted to escape.

Although the lawsuit notes that Nestlé and Cargill do not own the cocoa farm where the children were abused, “they maintain and protect a steady supply of cocoa by forming executive buyer/seller relationships with Ivorian farms.” This, the suit alleges, means “the defendants effectively control the production of Ivorian cocoa,” and are therefore liable.

The Ninth Circuit ruled last week that the suit could not be dismissed. The defendants “were well aware that child slave labor is a pervasive problem in the Ivory Coast,” the court noted, and yet they “continued to provide financial support and technical farming aid, even though they knew their acts would assist farmers who were using forced child labor, and knew their assistance would facilitate child slavery.”

“In sum,” Judge Dorothy Nelson writes in her opinion, “the allegations paint a picture of overseas slave labor that defendants perpetuated from headquarters in the United States.”

The lawsuit is just one of several legal actions against chocolate giants in recent years involving human-rights abuses in West Africa. In 2015, three American plaintiffs brought separate suits against Mars, Nestlé, and Hershey’s. Those cases focused on packaging, and argued that the companies were violating California consumer protection laws by failing to disclose that their products’ supply chain may involve child slave labor.

All three suits were dismissed in February 2016, but the plaintiffs appealed. This past June, the Ninth Circuit upheld the Mars dismissal, ruling that the company did not have a legal obligation to inform its customers that children may have sprayed pesticides, carried heavy sacks, or used machetes to break open cocoa pods in the making of their chocolate, “even though,” wrote Judge A. Wallace Tashia, those practices “are reprehensible.” The fates of the suits against Nestlé and Hershey’s are yet to be decided.

In 2001, chocolate makers agreed to eliminate child labor in their supply chains by 2005: “It was totally unachievable,” says one expert, and they knew it.

The battle against child labor in the cocoa trade began in 2000, after filmmakers Kate Blewett and Brian Edwards released their documentary, Slavery: A Global Investigation, which showed how children were being forced to work under abusive condition on Ivory Coast cocoa farms.

The Ivory Coast is the world’s leading cocoa producer, exporting almost 1.8 million metric tons in 2015 alone. (Neighboring Ghana comes a close second.) According to the US Department of Labor, some children in these countries perform dangerous tasks or are forced into work after being trafficked, kidnapped, or sold. Nestlé, like most other large chocolate manufacturers, sources some of its beans from the Ivory Coast, making it difficult to remove the risk that their supply chain is infected with child labor. Nestlé admits as much, and insists it is working to tackle the problem.

In 2001, as the industry’s labor problems began to pervade American consumer consciousness, Rep. Eliot Engel (D-NY) introduced legislation calling for “slave free” candy labeling. The legislation was approved in the House, but before before the Senate could vote on it, the industry promised to deal with the problem. That September, industry heavyweights signed a voluntary agreement, the Harkin-Engel Protocol, which committed them to eradicating the worst forms of child labor from their cocoa production by 2005. “It was totally unachievable,” says Tulane University professor William Bertrand, and the industry knew it.

The 2005 deadline came and went with little to show for it. Child labor, including the worst forms as outlined by the United Nations, remained pervasive in the cocoa industry. The Harkin-Engel signatories agreed to an extension—then another in 2008 and another in 2010. (The latest framework calls for a 70 percent reduction in the worst forms of child labor by 2020.) “They didn’t want regulation, obviously,” Bertrand told me, and the agreements helped them avoid it “for a decade or so.” (Nestlé says it “welcomes and encourages” government action “including through regulation.”)

He would know. Backed by the Labor Department, who hoped to monitor progress on Harkin-Engel, Bertrand co-authored two studies during the 2008 and 2013 growing seasons on child labor in cocoa production in Ghana and the Ivory Coast. The 2013 study concluded that more than two million children, ages 5 to 17, were working the cocoa farms. The number of child laborers actually grew between the two studies, suggesting that, despite the industry’s efforts, the problem was getting worse. Bertrand and his collaborators also saw an increase in the number of Ivory Coast children working under hazardous conditions—using sharp tools, for instance, and being exposed to harmful chemicals. About 1 in 5 of those children was younger than 12.

The experts I spoke with said eradicating child labor in the industry will require major advances in development in cocoa-producing regions. Economic growth and access to education are key, and Big Chocolate cannot solve the problem alone.

“We don’t think conditions have changed significantly in terms of the number of children working.”

But Elke de Buhr, Bertrand’s co-author, says the companies could be doing much more. “They are trying a lot of things, but what we have not been seeing is enough collaboration between efforts from different companies and other stakeholders,” she says. If you want to get rid of child labor, the efforts have to be sustainable, she adds. Small, short-term projects are not enough.

According to Nestlé’s website, the company has built or renovated 42 schools in cocoa-growing communities and has helped support families so they can afford to keep their kids in school rather than sending them off to work. Nestlé also has put into place a monitoring system, it says, to identify at-risk children and report the findings back to the company and its suppliers. When alerted to instances of child trafficking or slavery, “we report it to appropriate authorities immediately.” Nestlé says it spent $5.5 million on the problem in 2016. (Last year, the company reported sales of nearly $90 billion—more than twice the GDP of the Ivory Coast.)

The chocolate makers’ financial outlays to prevent child exploitation don’t necessarily reflect progress on the ground. “They talk a lot about the money spent on various activities related to child labor, but when we did the calculations, a fair proportion of that money was spent on sitting around and talking about it in London and Geneva,” Bertrand told me.

Nestlé provided Mother Jones with a recent report on its efforts to combat child labor, and a brief statement on the Ninth Circuit’s ruling: “Forced child labor is unacceptable and has no place in our supply chain. We have explicit policies against it and are working with other stakeholders to combat this global social problem. … We disagree with the Ninth Circuit’s decision and are assessing our appellate options. Regrettably, in bringing such lawsuits, the plaintiffs’ class action lawyers are targeting the very organizations trying to fight forced labor.”

A new study on child labor in cocoa production is underway, again backed by the Department of Labor. Bertrand is not involved this time, and he’s not optimistic that the results will be much better than those he observed. “We don’t think conditions have changed significantly in terms of the number of children working,” he says. Despite some positive changes, such as an increase in the amount of finished chocolate sold in the Ivory Coast and Ghana—keeping more of the profits in the local economy—and the introduction of free primary education in the Ivory Coast, broad change is still elusive.

With worldwide demand for chocolate projected to increase, and with it the demand for cheap labor in West Africa, Mars’ June courtroom victory may be heartening to the chocolate giants. But last week’s ruling could put them back on the defensive. “Some of the smaller companies are really doing more than their portion” to reduce child labor in their supply chain, Bertrand says. “But I think the larger companies just see it as a burden they have to bear.”